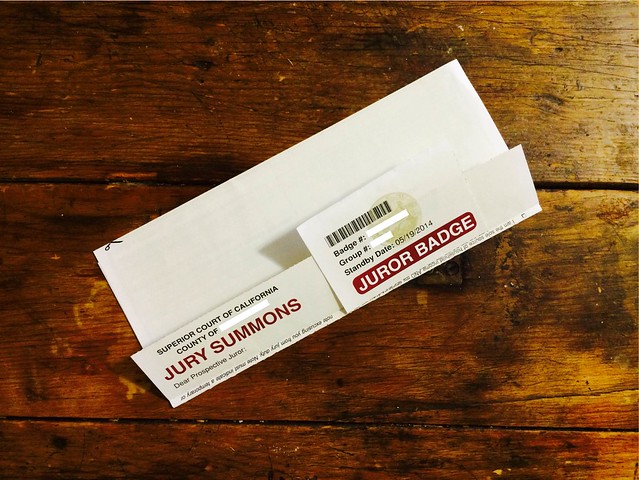 The reason I bring this up? I was summoned for jury duty a couple of months ago.

I guess I had lulled myself into a false sense of security that I wouldn’t be summoned any time soon, after I had to decline my last jury summon on the grounds that I wasn’t a US citizen at the time. I falsely assumed that that had taken me off their radar for a while, but I heard that they select people through the DMV system and I guess drivers license renewals puts you right back on the top of the list. Well, guess who just a couple of months ago  got her license renewed? Moi.

Maybe. Either way, I had to report at the courthouse a few weeks ago.

In Germany, there is no such thing as jury duty. It was abolished in the 1920’s as the verdicts were perceived as unjust and inconsistent.  So, imagine my complete lack of pre-knowledge or understanding of what was going to await me at jury duty.

Mostly, I just thought I am going to show up, sit around for most of the day and then be dismissed without actually having to do anything. But, that was absolutely not what happened.

I showed up for jury duty on the day of my summon (actually I had to call the day before to find out if my group actually had to report or not, and alas, my group was called in for the next day, Tuesday morning).

I showed up at 8 a.m., had to sign in, fill out a questionaire and then took a seat to wait for “orientation”, which is basically the lady at the registration counter yelling instructions over a speaker system.
We were told that we were possibly going to be sent to one (or multiple) court rooms during the day until we were either dismissed by a judge or chosen for a jury.

I still really had no idea what to expect. I was anticipating a long day of waiting and sitting around. But, at 9 a.m. my name – along with about 30 others – was called to court room 17. In the courtroom, we were presented with some details of the case:

My heart dropped into my boots.

When I was summoned for jury duty, I had joked that with my luck, I’d be assigned to a murder case, but I never thought that this was actually a possibility! Well, until it became one.

I also didn’t expect to be confronted with the two defendants right there in the court room. I thought that we might get some details of the case, but I didn’t expect to learn about the charges and suspects before becoming part of the jury. But oh no, all that information is presented during the selection process.

The judge explained some organizational stuff, explained the schedule for the trial and then asked anyone with a “hardship” (e.g. self-employed people, people who are caretakers and don’t have any other help, etc.) to fill out the provided forms. Everybody else was dismissed and asked to come back a few hours later.

After lunch, we were called in the courtroom again and this time, 18 of us – including me! – had to come forward and take a seat in (or in front of) the jury box.The rest of potential jurors were seated in the back of the room.

The judge explained some more details of the trial and then he interviewed us. He asked some general questions (for which we had to raise our hands, if applicable) and then he interviewed everyone in the jury box individually.
We were asked about our backgrounds, if we had previous experiences with law enforcement, crimes (as a victim or perpetrator) and if we knew people who worked in law enforcement.
We were also asked if we were biased towards certain people and about our abilities to assess someone’s credibility in the witness stand.

To be quite honest, I was kind of stunned how many of those people who were sitting in the jury box with me claimed that they completely unbiased and that they were definitely able to tell if someone was lying or telling the truth! Witnesses that are complete strangers to them, nonetheless! Isn’t that a little presumptuous?

While I do think that I am not a very biased person and that I aim to treat all people equally, I don’t think that I could claim to be completely unbiased. Aren’t we all a little biased against other people? Don’t we all judge people – even if only a little bit – by our first impressions of them? I couldn’t help but steal a glance at the defendants and think “do I think they could have committed such a crime?”.

Maybe I am too honest. Maybe I take this responsibility a little more seriously than others, but it would be stretching a point to claim that not some of my judgement of the situation (beyond the hard facts) would be influenced by some sort of bias.
Isn’t claiming to know if someone lies or tells the truth a bias in itself?
When it comes down to it, jurors will, in the end, use some biased judgement in deciding a case, especially if the hard facts don’t solve the case and they have to rely on witnesses mostly.

Of course, if I had been chosen for the jury, which I – spoiler alert! – did not, I would have tried my best to be objective, unbiased and judge the situation by the facts, but since I knew nothing more about the case and the people that were involved in it, it was a pretty bold statement to claim that those details didn’t matter.

The judge dismissed us in the afternoon and we had to come back the next morning, when the prosecutor and the two defense attorneys got the chance to ask us questions before they started dismissing people.

The judge cautioned us right away that there was no point in speculating why we were dismissed or not, because there are many different factors that play into the decisions of prosecutors and defense attorneys.
However, when the prosecutor dismissed me, I wasn’t sure if it wasn’t because I had been quite honest about the fact that I don’t believe that people can be completely unbiased (even if that would be desired, obviously!).

I found the selection of the jurors quite random, I have to admit. I am not sure what I expected during the process, but I didn’t expect to be asked “do you think you’re unbiased? Ok then!”

Ok, this is obviously an exaggeration, but how can someone, within a couple of hours and with the help of some questions that will be answered very subjectively, make a decision if someone is fit to be a juror or not? I  mean, most individuals are simply not free from holding social and cognitive biases, although it’s believed that those biases are controlled when people work together as part of a group.

Since I was dismissed that day and had to leave the court room right away, I have no idea how many people of the original 18 were picked, how many people in the audience were interviewed and who eventually made it on the jury. I would have loved to know that.

I have thought a lot about the experience since then and about the jury system and the reasons why we don’t have it in Germany. There is a tremendous amount of bureaucracy and time involved to summon and select jurors before you even get to the actual trial. It seems like a hell of a lot of effort, since jurors are selected on a case-by-base basis and prosecutors and defense attorney decide if you’re a “fit”. I still don’t know how I feel about it.

Well, anyway, I am glad I didn’t get picked for the case, mostly because I just found out about the outcome of the trial a couple of weeks ago. The two defendants were convicted of murder and are expected to be sentenced to life without parole. They’re both just over 20 years old. Though I do feel that they need to be punished for killing another human being — obviously! — it always makes me sad when young people “throw away their lives” like that.

Here’s a quick summery of how trials work in Germany, in case you’re interested.