I am participating in the Scintilla Project, a fortnight of storytelling. There will be writing prompts every day for the next two weeks. You can follow along on Twitter @ScintillaHQ and by searching the #scintilla13 hashtag for other participants and their stories.

Prompt: Post a photo of yourself from before age 10. Write about what you remember of the day the photo was taken. It may not be a full story – it may just be flashes of event and emotion – but tap into the child you were as much as you can. 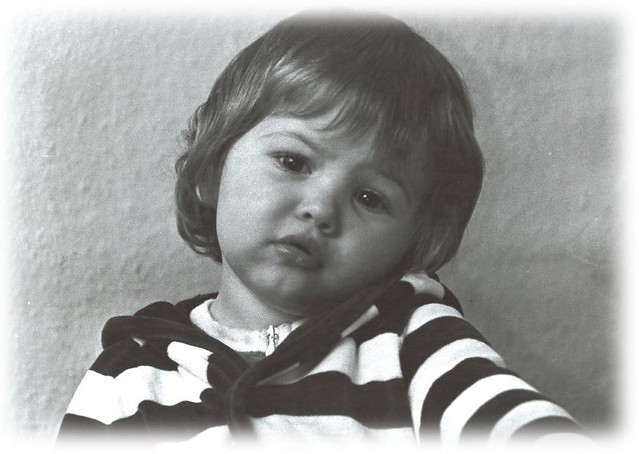 *Unfortunately, most pictures are back home at my parents’ house. I hardly have any pictures more recent than 2005 in my possession right now, so this one has to do.

While I don’t recall exactly what happened on the day this picture of me was taken, I know I was around 3 years old. I was a terribly shy and timid kid. Maybe you can see how uncomfortable I was in front of the camera. My expression basically screams “can you put away the camera, Dad?”.

This is one picture out of a series of black and white pictures that my Dad took of me and my sister. I am kind of bummed I don’t have one of them digitized that shows both of us. Those were beautiful, intimate moments between my sister and me that my Dad was able to capture.

Although he doesn’t do much in terms of photography anymore, besides documenting vacations and now (with the ease of a smartphone camera) the daily adventures of my niece and nephew, he used to be quite into photography when he was younger and I believe that’s where I got my passion for photography and the strong urge to collect memories by picture taking.

I know the pictures were taken in my parents’ first apartment (and my sister’s and my first home). Sometimes it’s really hard to pinpoint which early childhood memory is the earliest one you clearly recall, but I know that we moved from this place when my sister and I were three and, even though I don’t remember specifics about the apartment besides my parents’ hip 70’s brown corduroy couch, which I am actually sitting on in the picture, I visually remember the layout of the apartment.

There was a square hallway when you opened the front door. The living room was off to the left, the bedroom in the far left corner. To the right of the bedroom was the kitchen, the bathroom and then my sister’s and my room next to the front door. It was the room where we had two cribs next to each other (because my sister and I would communicate through the bars) and where my sister, at a very young age, pulled herself up and swung herself over into my bed, so we could be together. When my parents realized what she was doing, they took out some of the bars, so that she could just crawl over into my bed.

We lived on the third floor and from the kitchen window, we looked down on a single family house, which was owned by an old lady that so often stood at her kitchen window and looked up to us and waved. We called her “Winke-Oma” (waving grandma).

Our downstairs neighbors were a family with two small boys roughly our age, that we sometimes played with. To this day, I recognize those young men when I am back home in my hometown, even though they don’t seem to remember me or my sister. I guess I’ve always had a good memory for faces.

I also remember getting stung by a bumblebee in this apartment. I stepped on it in front of my parent’s bed and it stung me underneath my foot. It’s the only time I ever got stung, I believe.

These are more individual, random memories that I connect to this photo than a complete story, but it’s fun to go back and see which random bits of the past actually stuck with you all these years.