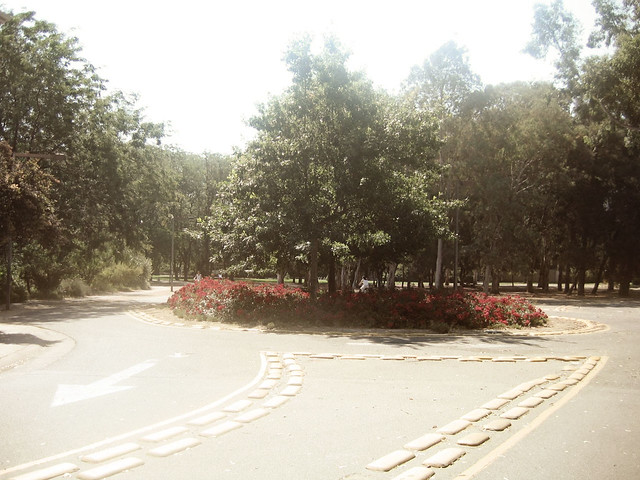 The other day, I wrote about how I came to California and fell in love. 10 years ago today, I met J.

I told you the whole story on how we met last year here, so I won’t repeat that, but what I didn’t share is where we met. We crossed paths for the first time right up there. Yes, right up there on the left side of this roundabout between his dorms, the main campus and the rec hall. I know, isn’t it kind of crazy to remember the EXACT spot that you saw each other for the very first time? Especially when the place is such a random place (not like a bar, or a class room, or the library).

J and I like to go back there. We have been back to this exact spot many, many times and it’s always a little magical – at least for me – to think that this is the place where we first met. It always makes me feel all giddy again.

So much has happened since that night. Back then, I didn’t have the slightest clue of how big of an impact this day would have on my life.

In all honesty, if you had asked me back then where I saw myself in 10 years, I would not have said “California”. I thought I was doing the exchange semester that I had promised myself for so long, I thought I had made a great friend in J and that I would move back to Germany to live my life there. Boy, was I wrong.

Here are 10 things that happened in the last ten years that (probably) wouldn’t have happened if I hadn’t met J.

★ Despite having studied English in College, I improved my – written and spoken – English tremendously. (True fact: you’ll never really learn a foreign language, until you live in a country where this language is spoken and until you completely immerse yourself in a foreign culture. And just FYI: after a while, you will also stop sweating profusely every time you have to make a phone call in said foreign language and the freak-outs will diminish greatly.)

★ We got married in VEGAS (and we also had a beautiful wedding in Germany later on!) and am now a permanent resident in this country. I – and a whole lot of other people – would have never expected that I would be permanently living in a foreign country at some point.

★ I learned how to navigate the US health care chaos. I mean, come on! Nobody can look me in the eye and with a straight face call this a system. Don’t even get me started. I was really worried about the health care situation in this country and let’s just say my concerns were valid in many ways.

★ I found myself a career at a very well-known and respected government agency, working with an awesome group of people. I would have never thought that I would work for them one day.

★ Directly related to that: I went to Hawaii for work. YES. I KNOW! Isn’t that awesome? Like I said, I have the best job in the world.

★ We moved at least 7 times (that about 5 times more than I moved in Germany in 25 years). We lived in Northern California and in Southern California – two completely different places; both having their own perks.

★ I spent time at the beach on Christmas Day a couple of times! The beach! Who does that? (Californians apparently.)

★I went to Disneyland! (Or is it Disneyworld? I can never remember which is which :) but I think Disneyland is right – the one in Los Angeles).

★ I learned to live with having a meager 11 paid holidays per year. You guys, this is very little – as in, absolutely not enough! Luckily, I have a very flexible boss who will let me work overtime and use that as extra vacation time. I tell you, I’d die otherwise. How am I supposed to go and see my family and go on vacation with my husband with two lousy weeks off?

Amazing to look back and think about what turn my life has taken… :)