Today I’ll be participating in “Take a Blogger to Work Day”, initiated by the lovely Gina at hiyaluv.com.
I have a degree in Geography, English and Physical Education and was heading for a career as a teacher, when my life’s path got diverted by an exchange semester and eventually a move from Germany to California.
Now I work as a geologist and data processing specialist for a big government agency. Below, I am going to share on of my more exiting work days.

… or at least, what I should be doing occasionally anyway. Most of the time, I am stuck in the office behind a computer just processing  data (which sounds more boring than it actually is, believe me!)

So, my boss took me on a field trip Monday and Tuesday. FINALLY. I had been hoping to go in the field – to feel like a REAL geologist, you know – for a while, but it hadn’t worked out so far. But I finally got to see a site, actually two sites, that I have been working on pretty much since the day I set foot in this office as an intern 4,5 years ago!
Does the name “Parkfield” ring a bell for anyone?

It’s a teeny-tiny community, with a population of mind-boggling 18 people, in the middle of nowhere in Central California, well-known in the seismic community for it is located in the Tremblor (Spanish for earthquake) Range between the San Joaquin Valley and the Central Coast. 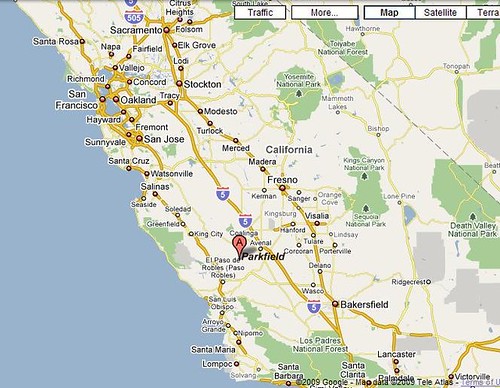 Parkfield lies along the San Andreas Fault, one of the most famous faults in the world. In case you didn’t know, and you probably don’t, I wrote my Master’s thesis about the San Andreas Fault, so I have personal interest in this study area.
The San Andreas Fault is a continental transform fault that runs a length of roughly 800 miles (1,300 km) through California. The fault’s motion is right-lateral strike-slip ( relative horizontal motion). It represents the tectonic boundary between the Pacific Plate (moving north) and the North American Plate (moving south). 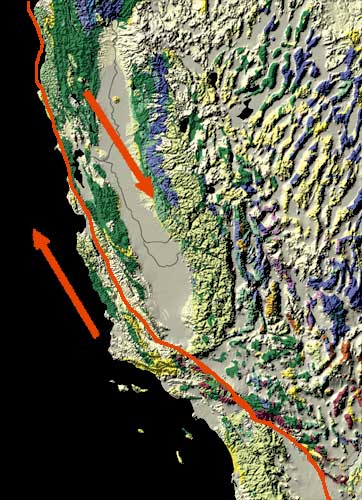 Parkfield lies at the southern end of the central segment of the San Andreas fault which is generally considered to exhibit ‘aseismic creep”, horizontal movement without causing notable earthquakes. Parkfield however has documented evidence since 1857 of moderate-size earthquake of about magnitude 6 on average of every 22 years.
The last, slightly overdue 6.0 earthquake (which should have taken place by 1993) took place in September 2004 and I have worked on two surveyed sites in Parkfield since that earthquake:

a) Carr Hill – it’s a depression representing the San Andreas Fault, which is instrumented with a cross array of cylindrical posts, a video camera (which, triggered by an earthquake, records real-time motion) and a creep meter (an instrument that monitors the slow surface displacement (aseismic creep) of an active geologic fault).
Unfortunately, this experimental array will be removed soon, since it was set up on privately owned land and sadly, the owner has withdrawn his permission to use his land any longer.
It’s really too bad because this was such an interesting study site. 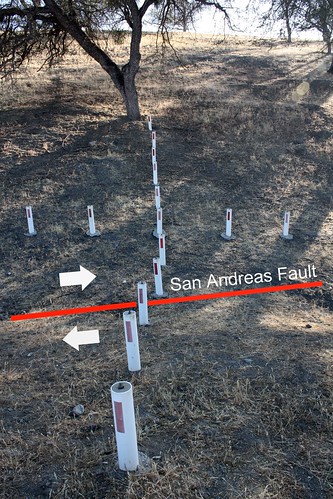 See how all the posts are in a straight line and then all of a sudden they start moving to the left (south)?
The San Andreas Fault is – of course – not a straight line like this, but in this area the movement narrows down to the line between the 3rd and 4th post.

b) Parkfield Bridge – a bridge across the San Andreas fault, which runs through a (often dry) creek bed, whose piers on either side have shifted over time. 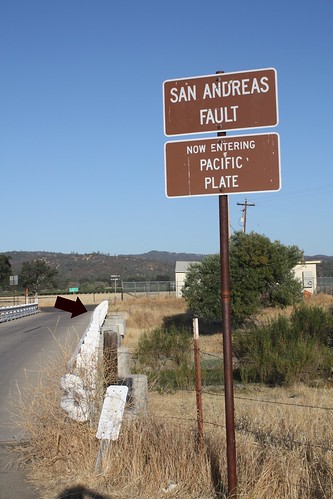 Over the last 5 years we’ve measured displacement (we’re talking decimeters) on both research sites that accounts for the aseismic creep that has occurred since the last earthquake in 2004. Eventually, the bridge will snap into two pieces, one side moving to the north and the other side moving to the south.
Can you wrap your heads around this? It’s sounds somehow unbelievable, but this is that would happen if the bridge wasn’t worked on constantly.

The two days in the field were both exciting and awesome and long and exhausting. It was hot and dusty, 95°F and even though I had enough to drink and we were sporting a fancy umbrella to shade our sensitive instrument (and ourselves ), I had a dizzy spell just 2 hours into our field work. Just lovely! It was kind of embarrassing and I  just hoped the earth would open and swallow me up at that point.
It didn’t last long though and I was OK for the rest of the field trip.

If you made it all the way down here, I applaud you. You haven’t fallen asleep yet.
But honestly, come on, you cannot tell me that this is not HOT STUFF and truly fascinating! I assure you, seeing science in the field just blows your mind!