I had the busiest weekend of my life.

Ok, maybe not of my life, but definitely of this year :)

I had something lined up EVERY single day. That is quite unusual.
On Friday, I went to the German butcher shop to pick up some fresh pork belly for the BBQ that was coming up on Sunday! I bought about three pounds altogether (who knows when it’ll be available again, right?!) and froze a third of it.
Then I asked my new “potential friend” if she wanted to grab an iced coffee with me. I parked in an one-hour-parking spot and walking into the coffee shop, we were joking that we might have to check on the car after an hour to make sure it wasn’t marked to avoid a ticket.

We sat outside in a little Biergarten-like setting, the sun was shining, people were hanging out playing Chess, birds were singing, I sipped my iced coffee, we talked… and talked, and talked some more, and then, when I checked my watch for the first time, it was 3,5 hours later *gasp* (imagine our shocked faces!)
Needless to mention, we had totally forgotten about the car and the one-hour parking.

The Parking God, however, seemed to be sympathetic to us that day, because I didn’t get a ticket (which I’d like to see as a good sign).

Friday night, we watched the finale of the “X-Files” series. I have to admit, I was feeling very sad that we’re completely done with it. I’ve come to look forward to our “X-fest” (as J liked to call it) nights. What now? What other series can you guys recommend (please don’t say any of the following, because J and I refuse to watch them “Lost”, “Grey’s Anatomy”, “Desperate Housewives”, “House”… can’t tell you exactly why.)

Saturday morning, I met with an old friend whatever-you-might-call-someone-that-you’ve-known-for-a-few-years-back-from-College-but-have-only-kept-up-with-irregularly-in-the-last-three-years for breakfast. A and I hadn’t seen each other in over two years and it was quite nice to catch up. We only live about 30 minutes from each other now and I have no idea why it’s taken us so long to finally get together again (well, in fact, I know why, but whatever).
We went to a second-hand bookstore after breakfast and then spent about two hours touring the “Crocker Art Museum“. I had always meant to go there, and hadn’t managed to go until last weekend. It was amazing.

I ran some errands in the afternoon and then J and I watched the “X-Files” movie (that came out last summer) in the evening. While I kinda liked seeing Mulder and Scully again, matured from when the finale was originally broad casted, J and I were both equally disappointed that the movie ZERO connection to the end of the series (despite one or two comments that were made that referred to events from the last couple of episodes). What was Chris Carter thinking?

On Sunday, we met up with two German-American couples for a BBQ. It was 105°F/40°C out here, mind you, but we went to the park anyways and found a nice place with a BBQ in the shade. We had marinated pork belly (yummy!), sausages, vegetable skewers, pasta salad, Mexican salad, bread and tzatziki. 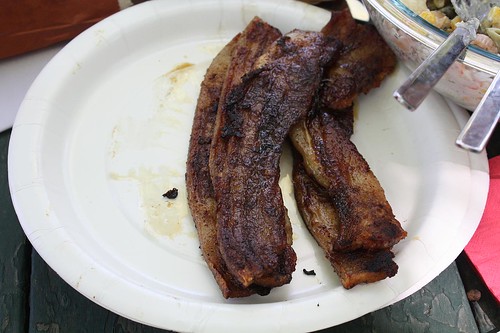 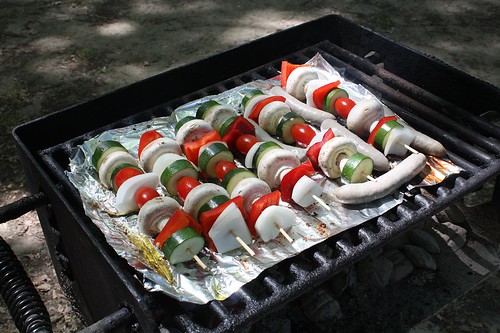 We all got along really well and hung out for several hours!

I think I had a little bit of a “heat stroke” when we wrapped up and went home around 6 p.m..
I had a headache and collapsed on the couch for a nap, but who cares, we had the best time in a long time! :)