Perfect situation to sentimentalize: imagine a concert hall with thousands of screaming girls/women, the light goes off, and somewhere in the dense fog you can see a hydraulic stage lifting five, barely noticable figures, onto the main stage.
The noise is deafening by now. Finally, the fog lifts, the music gets louder and there they are, long-awaited and eagerly anticipated: NKOTB.

17 years, 5 months and 1 day after my first concert at the Sportsarena in Cologne in Germany, they’re reunited and rocking again! :)
Those first few minutes were totally overwhelming and I literally had tears in my eyes. For a second, I really felt like I was 15 again… only, wait a minute. The boys are men now and looked – surprisingly – even better than back in the days. I would call that “positive aging”!

If my Dad knew that I went to a NKOTB concert again (oh wait, he knows. I told him on the phone)…. he wouldn’t believe it. When in 1991, shortly after the first concert, I bought tickets for a second concert 6 months later, he seriously enunciated that I couldn’t seriously believe that I would still be a “fan” in 6 months.
Well, I have news for you, Dad: I STILL am a fan. 17 years later. Call me loyal (or just simply crazy :)).
Truth is, it was one of the best nights ever!

I just wish I hadn’t forgotten had daredÂ to bring my camera (since it said on the tickets “absolutely no recording/picture taking”), but of course EVERYBODY brought their cameras (I am such a chicken). At least I did take some pictures with my not-so-shabby-cell phone camera :)
Anways, to make a long story short: they played for 2,5 hours, performed an amazing mix of new songs and old NKOTB songs, new choreographies and old NKOTB choreographies that every true blockhead clearly recognized (!) and were simply in such a great mood that it was contagious!
Even J absolutely loved the show.

In the middle of the evening, everything and everybody calmed down for a bit when they showed a slideshow in memory of people that meant so much to the individual members of the group throughout their careers. Especially the photo of Danny and his mom completely moved me. Dan’s mom died in 1999 of breast cancer and once I got so lucky to meet her in Boston in 1993. She was such a lovely person. Dan and his Mom were really close and he set up a website for her (rememberbetty.org) to raise money for breast cancer research. I thought that was so touching!

I really, really didn’t want to go home after the show. I wanted that nostalgic feeling to last forever!
If they’re still going to perform anywhere near you, GO! Get tickets and have a fantastic night. It’s worth it. 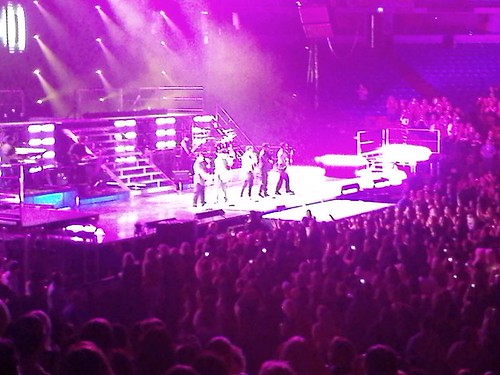