Lake Tahoe is pretty in the winter, surrounded by all the high altitude, snow-covered mountains. Especially when there are no clouds. 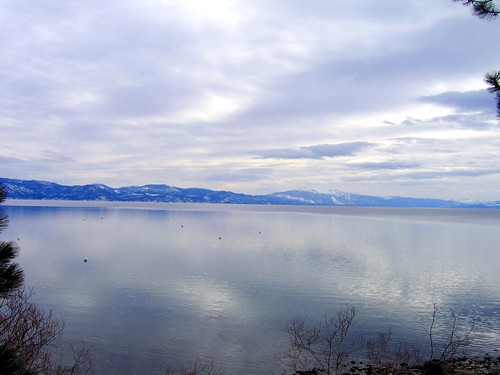 I didn’t expect to see Lake Tahoe anytime soon, although I had contemplated, and was about to talk to J about, a possible trip up to the snow sometime before spring comes around. I crave some “snow time” in the winter.

Lake Tahoe is only about 2 hours away. That’s nothing compared to the distances I was willing to drive in Europe to get to some snowy mountains.

Yesterday I got my chance. When I came into the office in the morning, my boss asked “Would you be willing to drive up to Tahoe and pick up our instrument at the field office?” And then the question: “Have you driven in the snow before [not that there was any snow on the roads, but there was potential snow fall in the afternoon]?”
Excuse me? Just because Californians – no offense – freak out and lose all their driving skills, if water in any shape or consistency falls down from the sky, doesn’t mean that I, who grew up with “real” winters in Germany, can’t drive a car when there’s some snow on the ground.
I was a little perplexed by the question. Also, usually my other co-worker gets to do those kind of tasks. But as it turned out, he was caught up in some other project for the whole day and we really needed the instrument by today.
I got the keys to one of the governmnt vehicles [= SUV :)] and off I went.

It was a great drive. Nice scenic route through the Sierra. I wish I could have stayed at the Lake a little longer, or, even better, could have brought my snowboard for a little ride :) Oh but wait, that’s still in Germany. Next thing on the list to bring back here. Renting gear sucks.

It was a good day. I only got a few hours of work done at the office, but hey, I certainly did like getting paid for goingÃ‚ on a drive to the snow :)