I have to say that I am a big advocate of everybody having a birthday-cake [or -muffins] on their birthdays. Preferrably homemade.
When I see the cakes that you can buy at the supermarkets here, all colorful, supersweet and disgusting, I really want to throw up. I once bought one of those “cake mixes” where you just have to add water *ieeek* or milk… but the outcome tasted terrible. It’s really not worth it to buy a cake mix, if you can buy and mix the single baking ingredients in the same amount of time. And the actual cake tastes so, so much better if you make it from scratch.

I also put some candles on the muffins and got J a card, a gift certificate for Amazon and tickets to the Causeway Classic which we will be going to on November, 3rd.

We’ve been a couple of times before and it’s always a fun game and a “heated” atmoshpere. I really don’t know who I am going to cheer for this year, J [and I somewhat] being UC Davis alumni and I being a Sac State Employee now.

I only worked a half day today, so I could spend some time with J. Since we took Kari to the airport in the afternoon [because she’s visting a friend over the weekend], we had the rest of the day -and therefore the rest of the weekend- to ourselves.

We went out to dinner last night at Thai Basil. We had passed the restaurant a couple of times while taking a walk and J had expressed interest in going there sometime, so he picked this place for his birthday dinner :) We both love Thai food!

We had crispy fried spring rolls as an appetizer 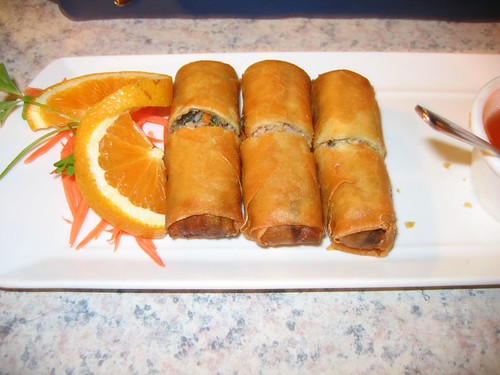 and then Pad Thai with Shrimp and Spicy Red Curry. 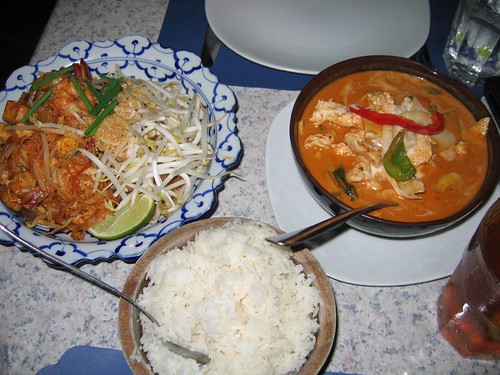 The place definitely deserved to be voted Sacramento’s Best Thai. It was delicious!

We finished up the night with some spooky X-files episodes. Yes, folks, we’re still working on watching all seasons. We’re half way into season three now and I hate to admit it, but I’ve really gotten into it ;)

It was a quiet and uneventful birthday and I wish I could have thrown a party for J [but you guys are just too far away for that , darn it] but I think he still had a good time “just” with me *g*

P.S. Of course, it was also Susi‘s birthday yesterday – J and she are birthday twins ;) – and I wanted to say: I wish you all the best again, sweetie. Did you get my card/gift??