Hi guys, sorry for updating you so lateÃ¢â‚¬Â¦ time is just flying right now and I am trying to enjoy it as much as I can :)

We spent the weekend at home and watched a whole lot of movies and several episodes of X-files. Jon has declared watching all episodes of season I his goal by the time I leave [there are about another 18 episodes left], so we really have to keep watching.

Aaron and Maria came over for a while on Sunday and we went to Ã¢â‚¬Å“PaneraÃ¢â‚¬Â for lunch. They have awesome sandwiches, but I still love their french baguette just with butter the best ;) Sandwiches are Ã¢â‚¬Å“too complicatedÃ¢â‚¬Â for me with all their different ingredients – I like it plain best *lol* In the evening, we watched some Basketball and then played Ã¢â‚¬Å“GrassÃ¢â‚¬Å“, a fun card game.

Monday afternoon, I went to the Outlets with Maria :) You just gotta love the Outlets *lol* we mainly went, because Maria needed to buy some things, but I ended up buying some shirts for Jon and a shirt and earrings for me. Ã¢â‚¬Å“ClaireÃ¢â‚¬â„¢sÃ¢â‚¬Â had this great sale on earrings – even clips! I was amazed by the variety – so I bought four pairs! Now I see no point in getting my ears pierced anymore at all ;)

Yesterday, Jon and I spent a day in the Bay Area. We left in the morning and drove to San Francisco :) When we left Sacramento, it was sunny outside, but on our way it got pretty foggy and I was afraid that the weather in San Francisco would -as always- be kind ofÃ‚Â  dull, but we were lucky! When we reached Golden Gate Park, the sun was out. We decided to check out the Ã¢â‚¬Å“Conservatory of FlowersÃ¢â‚¬Â which was a good choice as it was highly interesting and they had an orchid exhibition that was truly amazing. Orchids are so pretty!

After that we walked around some more and then decided to drive to the ocean. So we drove through the whole Golden Gate Park and then hit the shore. Many people were out and it was really nice, but windy. We continued our trip by driving northwards towards the Golden Gate Bridge and got a wonderful view of it. We stopped several times along the way to enjoy the view.

All that walking and sight-seeing made us hungry, so we drove back to Rockridge/Oakland. JonÃ¢â‚¬â„¢s Mom had lived in Oakland for about two years and there were quite a few places that we were familiar with and that we wanted to see again, including a book shop where I had gotten good deals on calendars after New YearÃ¢â‚¬â„¢s in the recent years. So we went there and bought a new calendar for our apartment :)
Then we had dinner at Ã¢â‚¬Å“FilippoÃ¢â‚¬â„¢sÃ¢â‚¬Â, an Italian restaurant [run by Hispanics *lol*]Ã¢â‚¬Â¦ in any case, the food was amazing! We started off with an appetizer platter [bruschetta, tomatoes, mozarella and asparagus] and then had some pasta. Very yummy!
At last, we drove up into the Oakland Hills and enjoyed the evening view over the Bay :) It was a fun day [and I am kind of sad that I probably wonÃ¢â‚¬â„¢t go to SF again any time soon :( ] 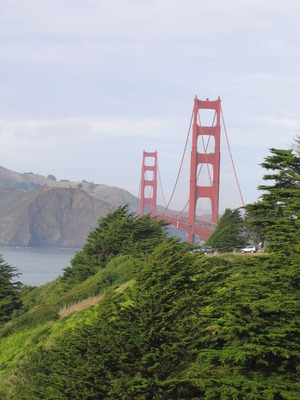 Today we got up early, did the laundry, I talked to my sister on the phone and at 1:30 p.m. I left for Davis, because I was meeting with Elcin – the turkish girl that I had met at my friend SheilaÃ¢â‚¬â„¢s desert party :) Remember? We met at Ã¢â‚¬Å“ChocolatÃ¢â‚¬Â, a really nice little cafÃƒÂ© in Davis which sells delicious cakes and chocolate treasures.
It was really great to see Elcin again. I had kind of fallen in love with her at first sight, because sheÃ¢â‚¬â„¢s this cute short girl with a neverending smile on her face :) SheÃ¢â‚¬â„¢s a PhD student at UC Davis and sheÃ¢â‚¬â„¢s getting her PhD in Athmosperhic Sciences [ another scientist! :)]
We had a wonderful time chatting and catching up on the last few months. I just wish we could have spent more time togetherÃ¢â‚¬Â¦ I just got to know her last summer, so time for us was really short. I hope I can see again next week before I leave.

Later I drove to the Outlets in Vacaville to get a belated Christmas present for JonÃ¢â‚¬â„¢s parents and then I was looking around some more (I just love wondering through all the storesÃ¢â‚¬Â¦ and I was good and didnÃ¢â‚¬â„¢t buy anything more ;)).
Tomorrow itÃ¢â‚¬â„¢s off to Ventura for the weekend. I am looking forward to spend some more time with JonÃ¢â‚¬â„¢s parents, since we only saw them briefly on New YearÃ¢â‚¬â„¢s.

Have a good weekend everyone!