Saturday, December 31st, the last day of 2005 and I was getting married :) Let me tell you, this day was the most surreal day everÃ¢â‚¬Â¦ but we had a blast.

Friday night, DhevanÃ¢â‚¬â„¢s Dad Raja had his brother and family visiting. They all stayed over at their house and the next morning we had a very typical Indian breakfast. Samosa (deep fried vegetable pastry) and Dosa (something like tortillas) with Coconut Chutney (like a Coconut-mint dip). It tasted really good (although I donÃ¢â‚¬â„¢t think I am going to change my breakfast habits to Indian food ;)).

Then Jon and I took showers and got ready to go to Las Vegas. Dhevan was going to come with us as our witness. We left around 2:45 p.m. and it took us about an hour to get to the courthouse. It was raining and very windy in Las Vegas! First Jon and I had to go the Marriage License Bureau and apply for a marriage license. There were quite a few guys standing outside of the courthouse to advertise for different wedding chapels. It was overwhelming. Inside the courthouse we had to get in line, because there were quite a few couples who signed up for the marriage license. I didnÃ¢â‚¬â„¢t expect so many people to be there (already I had read that New YearÃ¢â‚¬â„¢s Eve is a popular day to get married in Vegas). Fortunately we didnÃ¢â‚¬â„¢t have to wait for too long and after 15 minutes, we had our marriage license. We decided to take one of the guys in front of the courthouse up on his wedding offer and a limousine took us to one of (the many) wedding chapels. On the ride, The Doors were playing on the radioÃ¢â‚¬Â¦ what a funny coincidence!

Inside the wedding chapel it was really busy. I thought for a slight moment that it hadnÃ¢â‚¬â„¢t been a good idea to chose one of the chapels, but that we should have done the civil ceremony at the courthouse, but then I was convinced fairly quickly that I wouldnÃ¢â‚¬â„¢t forget that day again :)
There were five different Ã¢â‚¬Å“chapel roomsÃ¢â‚¬Â to choose from and while we were looking at all of them, an Elvis imitator was singing in one of the chapels. It was so cheesy *LOL*
We decided to go with a a very simple ceremony package (they had different packages to chose from including the one with having Elvis play at your ceremony ;)) and picked a white room with lots of red and white flowers.
While we were waiting, a minister casually introduced himself and said that he would do the ceremony while bustling to the next wedding.
So we waited in the room and then he finally came in, closed the sliding door behind him, started some music and within 5 minutes we had said our vows and were married :) It was over in a blink of an eyeÃ¢â‚¬Â¦ and it felt really surrealÃ¢â‚¬Â¦ but I must say that saying the vows while looking into each others eyes was definitely very emotional. 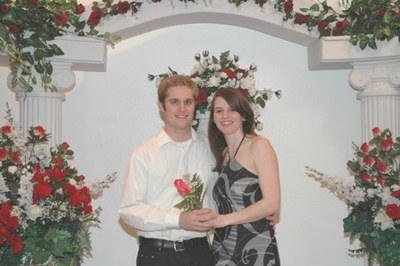 A photographer came in to take some photos and while we were waiting for the photo-CD, someone took care of the paper work for us. I was a little bit surprised that we didnÃ¢â‚¬â„¢t have to sign anything during the ceremony (that is what I know about civil ceremonies in Germany) and Dhevan, as our witness, also didnÃ¢â‚¬â„¢t have to sign anything.

After we received our marriage cerftificate, the limousine took us back to the courthouse where Dhevan left us to go back to Pahrump and we took the car to go to the Venetian, where we had reserved a table at ZeffirinoÃ¢â‚¬â„¢s Ristorante for dinner.
The restaurant was amazing. We got a table on the Ã¢â‚¬ÂpatioÃ¢â‚¬Â (which of course was still inside the Venetian, but if you have ever been in there, the whole ceiling is created so that it feels like youÃ¢â‚¬â„¢re outdoors) and it was totally romantic. We had a four course New YearÃ¢â‚¬â„¢s dinner and the food was absolutely fabulous. I had sea bream carpaccio, followed by a salad, N.Y. steak and chocolate cream desert. So yummy :)

After dinner, we walked around inside the Venetian a little more and then decided to drive back to Pahrump. We had reserved a hotel room for that night and we wanted to spend the time by ourselves and celebrate into the new year as newlyweds :)
We watched the amazing Las Vegas fire works on TV and then enjoyed our hotel room and the Jacuzzi.

The next morning, I took another nice bubble bath in the Jacuzzi and then we got ready. We stopped by at DhevanÃ¢â‚¬â„¢s place again to thank his family for their hospitality and then were on our way to Ventura. It took us about 6,5 hours, since there was a lot of traffic and it had started to rain shortly after we crossed the Nevada-California state border. As you might have heard on the news, California is being hit very badly by heavy rains. There is a lot of flooding going on and landslides and debris flows are very likely in certain areas. Fortunately, we made it safely to Ventura.
JonÃ¢â‚¬â„¢s parents were so happy to see us. His Mom hugged me welcomed me to the family :) she is totally excited about the wedding and canÃ¢â‚¬â„¢t wait for the ceremony in Germany.
We had a great pasta dinner and then a belated Christmas with exchanging gifts. JonÃ¢â‚¬â„¢s Mom got me a really cute cardigan with a zipper, a necklace with matching earrings and a book [The Sixties chronicles].

Monday morning, Jon and I decided to drive back to Sacramento. In spite of the bad weather, the drive went pretty smoothly. Once we were over the Grapevine, it stopped raining and we actually saw a really beautiful rainbow :) 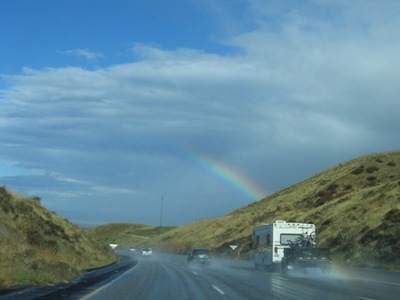 I did some shopping when we got home and then we got cozy on the couch and watched Ã¢â‚¬Å“TroyÃ¢â‚¬Â which was a great movie, but it pretty much solidified my conviction that I donÃ¢â‚¬â„¢t need Brad Pitt in my movie-world ;) [oh yeah, I hear you all scream with outrage already LOL].

Yesterday was pretty relaxedÃ¢â‚¬Â¦ we hung around the house and in the afternoon I went for a big shopping trip since our fridge was virtually empty. It was fun to do my shopping routine again :) Aaron and Maria came over for dinner, they had cooked a stir fry with rice and I had made a salad and then we watched NBA Basketball. The Kings lost againÃ¢â‚¬Â¦ they are not really doing well this season. If you ask me, this is all due to the huge change of players, but it was fun watching anyway.