Oh boy, I’ve had quite some crushes lately :) I really had a really marvelous weekend!Friday evening we made Turkey Burgers for dinner with yummy potatoes and salad. Then I hung out with Maria, while Aaron and Jon were playing music. We watched two episodes of “Summerland” (have I mentioned that I just love (!) that I can record TV with my notebook??? ;)) and then talked for a little bit.

Saturday was awesome! Jon and I left for San Francisco around 5:30 p.m. and we made it to the venue in under 2 hours.We parked the car [right down the street] and then walked over to Slim’s. It was shortly before 7:30 p.m. and there was quite a line in front of the club already, but the doors didn’t open before 8:00 p.m. and the concert wasn’t going to start before 9, so we decided to walk around and grab a bite to eat.
We walked further down and then peaked around the corner to see if there were any restaurants. There was a Café around the corner, so we walked over to look at the menu. They only had burgers and sandwiches and we decided to walk back to another Café that was right across the street from the club.
Well, just when we turned around, a car had parked at the curb and some guys got out… LIFEHOUSE! I couldn’t believe my eyes! I gave Jon a push into his side and said: There he is! :) He first didn’t realize that it was the band, but I was so excited.
Jason looked at us when we walked by and of course I chickened out and didn’t say anything to him… god, what was I supposed to say anyways?
“Hi Jason, nice to meet you… we are looking forward to seeing your show” :)
I wish I would have said something or asked for a photo… but then again, right in that moment it felt wrong. You know what I mean?
But I felt quite privileged, as all the people were standing in front of the club waiting to get in, while Lifehouse was just around the corner ;)
BTW, later during the concert Jason mentioned that they had dinner at this burger place around the corner… *aaarrgh* why didn’t Jon and I eat there??? Oh well, that’s life!

We entered the club at around 8:45 p.m. and were standing at the bar for a while. The supporting band Rocco deLuca was kind of lame. I didn’t like them much… but I took the opportunity to see how well I could take pictures from this spot. It was quite a bit away from the stage and I realized that the flash would only lighten up the space in front of me and I couldn’t see much of the stage, let alone the people on it.

I told Jon that we had to move, so when there was the break between the supporting band and Lifehouse and everybody was moving, we pushed our way through closer to the stage. The venue was pretty small and there was a lot of room [I mean the people didn’t squeeze together much], so it wasn’t a problem to get a spot in the approximately 8th row.
We had been standing there for quite a while, when a woman started to talk to us from behind… we first didn’t know she was talking to us. Then we noticed that she was asking how we got into that spot… [ahm, we pushed our way through the crowd?!], because “this poor girl was standing there for 1.5 hours and she said we weren’t in front of her before”.
Well, that’s how concerts work, lady! Since there was only General admission and no reserved seating, you stand where you want to stand.
I asked myself how SHE got into that spot next to her daughter (I suppose), because she wasn’t there before, so she must have pushed her way through as well! ;)
There was still a lot of space around us, so I suggested that she moved two feet to the right or to the left to have a better view [I mean, that’s what you do at concerts… there was a tall guy right in front of me as well, so I tried to move around a little to look around him]. The “Mom” was kind of pissed and said that it’s all about what is fair, but if we felt good about ourselves it would be fine (trying to make us feel bad)
What’s fair??? Hello? I mean, first of all, we have all paid $20 for the tickets and there are people with a much worse view than her daughter… and then it is totally normal for people to move around during a concert.
It was pretty obvious that she had never been to a concert before!
First I had felt kind of bad, but then I thought “what the hell? I paid money, too, to see the band” and a) the girl could have said something herself [believe me, she was old enough – at least 16!] and b) if her Mom had asked politely if we could move a little, so she could see better, we would happily have tried to make room for her, but just the way she talked to us was plain rude!

So we stayed where we were and then the concert started. OMG… it was amazing! 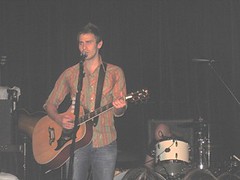 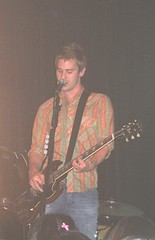 What a hunk! I think the photos turned out pretty well, given the fact that the lighting wasn’t really great… unfortunately I couldn’t use all the zoom on my camera (the digital zoom only seems to work during daylight), but I am still happy about the photos I took. I also recorded some short movies, but unfortunately the sound is a little cracking. Still a nice memory! :)
They played for about 1.5 hours and songs from all their three albums… it was so awesome! I am so happy I got to go!!!!

After the show we took a quick drive to the beach (just for fun!) and there were some bonfires going on… pretty cool :)
Then we drove back to Sacramento and went to bed around 3:30 a.m.

Sunday was pretty much a lazy day. I went shopping first and then spent the afternoon with Maria writing letters. For dinner we had Chickenbreast with Ricotta filling *yummy* so good!