+ I had planned to write a Labor Day Weekend recap, but honestly, there wasn’t much to recap (because we didn’t do anything exciting, besides enjoying a very laid-back weekend), so the few little highlights I will mention here.

+ It was super-smoky/hazy in Sacramento last weekend, mostly due to the wildfires around the state, and on top of that we were still in the middle of a heat wave. Except for running the usual errands on Saturday and my long run Sunday morning, I tried to stay indoors and stay cool.

+ I did stop by the Fleet Feet Labor Day Sale on Saturday though hoping for a steal on some new marked down running shoes, but no such luck. I stocked up on some Nuun and Honeystinger Waffles instead and got some 50% arm warmers for the fall (whenever fall decides to show up around here).

+ On Sunday, I found a baby squirrel on my long run. I didn’t want to put a picture here (the newborns look pretty fragile), but if you want to know what they look like… don’t you agree that they almost look like little puppies? Its eyes were closed and it didn’t have much fur to speak of yet, it could have only been a few days old, but it was breathing and trying to move around. No Mama-Squirrel was nearby. I knew that I couldn’t just leave it there to die (I think I have watched one too many episodes of Bandit Patrol), but I also didn’t have anything with me to pick it up and I was pretty much halfway out from my run, so I decided to finish my run and then come back with the car and a cardboard box to rescue the baby squirrel. I knew I was taking a  chance of it dying in the meantime, but what could I have done? Sadly, when I returned about 35 minutes later, it had indeed died and I am so heartbroken. I wish there was something I could have done, but I don’t think it would have made it either way.

When I told my Mom, she laughed and reminded me that as a kid, I had always picked up animals and birds in the woods behind our neighborhood and took them to our vet next door. No surprise that I wanted to become a vet for a long time. Have you ever rescued a wild animal? Did it survive?

+ I haven’t been very creative lately, but in the wake of Hurricane Harvey, I designed some #texasstrong cards for my Etsy shop. My friend Dina, the other half of our shop, lives in Houston and while she was lucky that she didn’t have to evacuate, my heart breaks for her city. All proceeds will go towards Texas flood relief efforts. 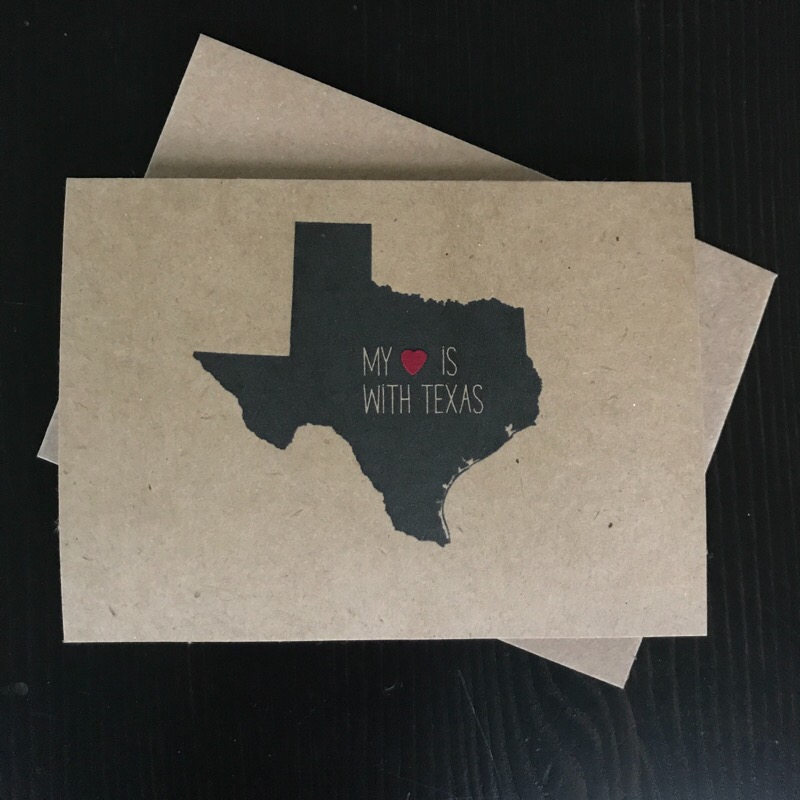 + I had a pretty rough night on Monday. Do you ever lie awake and think about all the things happening in the world? The what-ifs in your life? I think about events that (apparently) I still haven’t completely let go off. I think about things that I wish were different. Man, I hate when I do that. I mean, why? It made me feel awful and I tossed and turned the rest of the night. Let’s just say that the next morning I didn’t feel exactly rested and I had an early morning workout on my schedule. At least, running my heart out made me feel normal again.

I am linking up with Amanda from Running with Spoons for Thinking out Loud again.