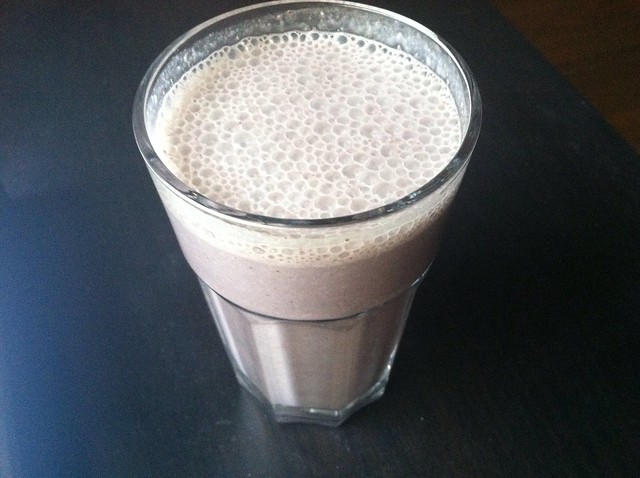 I honestly never thought I’d say this, but here it is: I dig green smoothies.
The thought of having a thick milkshake-like-but-not-quite-milkshake-like tasting liquid in the morning substituting as ‘breakfast’ simply seemed absurd to me.

I, the müsli-eating, cheese and liverwurst-loving, bread-devouring breakfast-enthusiast, really had a hard time with the idea of only having a ‘drink’ instead.

I know. I know! I take it all back! I am not afraid to admit that I was wrong. So wrong!

Since the sugar detox, I’ve basically had a smoothie at least every other day. First I did it because it was ‘suggested’ through the class and hey, who am I to dismiss good, well-intended suggestions? You can’t learn anything new if you don’t try. Well, I tried and I am really starting to like green smoothies in the morning. It’s fast and easy and I am having my breakfast on the lightrail (another healthy habit I am trying to get back into) on my way to work. It really works out all around!

I’ve been using Nicole‘s ultimate green smoothie formula. It’s printed out, laminated and pinned to my kitchen wall, so I always have it handy when I need it even though my current favorite I can already make without glancing at the list! I have been playing around with different ingredients (many more combinations to try though!) and this here my current favorite:

I added a half banana the other day, but I decided to not do this again. Bananas are smell and taste suckers, you guys! All I could taste was banana (and I am not really that big of a fan of bananas!). Maybe I’ll try it in combination with some other ingredients again in the future, but with this one, I want to taste the strawberries!

So, here is where you come in now (fellow detoxers or not): are you into smoothies? What ingredients do you like? What combination is your current favorite? I’d love to exchange different recipes with you guys so I can find smoothies that have been pre-approved, so to speak.

PS. I am not commenting on the smug faces and inappropriate yummy noises that Nicole mentioned in her blog post. You see for yourself.

PPS. I still like a solid-food based breakfast on the weekends though. Don’t take that away from me!