Most people probably don’t think it’s very desirable to share a birthday with someone in the family (as it might seem that you’d only get ‘half’ the attention).

Usually I have entertained you with a birthday post in the last couple of years, sharing pictures of the home-made cupcakes (that I baked for myself) and my “birthday table” with all the cards and presents I received from my family and friends.

This year, my birthday – almost three weeks ago – came and went without being mentioned on this blog. This year, I was too busy finally celebrating my birthday with my sister again. To be able to hug my sister on our special day was definitely the best birthday present ever! 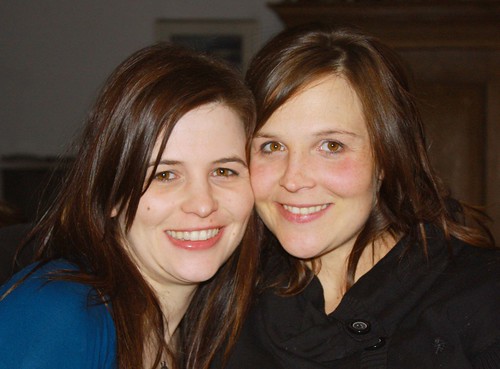 You know what they say, twins share a special bond. I don’t know if you believe in that or not, but I definitely do. Even though we are “only” fraternal twins and don’t share an identical genetic code, I am definitely convinced that we  do share a unique connection nonetheless.

My sister and I have been close for as long as I can remember (and from what I hear from my parents waaaay before then). I believe that the bond that my sister and I have has been forged by sharing  so many experiences together at the same point of our emotional and physical development.

I mean, think about it, our relationship started in our mother’s womb. We’ve therefore known each other as long as humanly possible. I think that is a fascinating thought. Even though we, of course, didn’t consciously know that the other one was there, it was something that we probably always subconsciously relied on.

After we were born we naturally – and from a practical point of view – did everything together; from eating and sleeping to bathing and playing. Although obviously our parents had no other choice in order to save time (and their sanity), it’s not hard to understand that constantly being around each other formed a strong bond.

I think one thing that favorably distinguishes fraternal twins from identical twins is the fact that fraternal twins benefit from their close relationship and upbringing, but still have the advantage of being born with individual personalities and appearances.
My parents definitely did something right by not dressing us alike after a certain age
(I guess, when we were babies it didn’t really matter that much and hey, dressing twins the same way is so cute, is it not?) and letting us develop our own personalities. Even though we went through all stages of life together, our parents treated us more like normal siblings than one entity.

I’ve heard many, many times that twins (or multiples) are put in separate classes in school to provide them with an opportunity to develop their own identities. While I can see how in some cases that might be a good idea, I am really glad my parents decided against it and let us be in the same class.

I did a little research about the bond of twins and found a ton of information and read somewhere (on Talk About Twins by Christina Tinglof) that another reason why twins may develop such a strong bond is that they can become each other’s transitional objects—you know, that teddy bear or security blanket that helps to ease the pain when Mommy’s not around.

This is so true for us. And even if I feel it has been so much more true for me (because I relied heavily on my sister when we were little), I know it was also true for my sister. We both always had the comfort of knowing that the other one was going to be there right alongside with you.

But isn’t that a bad thing, you might ask. Something that holds you back, because you’re not pushed to overcome a challenge on your own? Don’t you miss out on opportunities that help you grow?

Believe me when I say that you’ll get plenty of opportunities to grow when you get older and naturally go your separate ways a bit. Something that I wouldn’t want to miss though is this early connection between my sister and I that has  translated into an incredibly strong adult bond.

We haven’t always been “best friends” (in the common sense of the word), although I consider her my best friend now. We had our own circle of friends as teenagers and we also had different interests and hobbies.  But nobody will ever know me as good – and  for as long – as my twin, which basically gives our union an advantage over any relationship that we have formed later in life. I know that I can call her any time of the day (and vice versa) and I can literally share everything with her.
As much as I treasure my friendships, and I am blessed with a couple of awesome strong and loyal friendships, my sister is – and will always be – the first person that I turn to.

Do you have a person like that in your life?