Well, finally. Finally, I can bare the Christmas music that has been playing at every store… oh, only since the day after Halloween!… and I can finally start thinking about Christmas. Is it just me, or does it feel like the Christmas season is starting earlier every year? At least, here in the US, you would think that the start of the season is pretty clearly defined by the day after Thanksgiving.

Anyway,  today is the first day of Advent, you know, the fourth Sunday before Christmas, and this is usually the day that the pre-Christmas season starts for me. I didn’t have the time and leisure to put together my own advent wreath this year, but I got out some of our Christmas decoration and I am using this Christmas pyramid for the advent season. 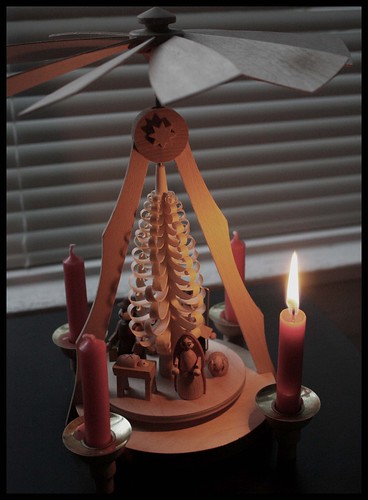 J’s  Mom gave this pyramid to us a while back. It has a nativity scene and four candles around, which I will lit, one by one, over the course of the next four weeks.
If you haven’t seen those pyramids before, it’s a German thing (they have their roots in the Erzgebirge (Ore Mountains), a mountain range in the Eastern part of Germany which forms a natural border between Saxony and the Czech Republic.) Even though they are a little bit kitschy, they definitely have their place during the Christmas time.