So this is it. Day 30 of NaBloPoMo and I made it, although this month has been so busy for me and full of life changing events.
I’ve been here in Southern Cali with my hubby for exactly 8 days now and surely but slowly the apartment is transforming from a ‘bachelor’s den’ into a cozy place. I like it. I feel I belong here. As soon as I win the lottery, which I have to start playing for this to happen!, I want to buy new furniture, new sheets, new curtains, new accessories, but for now, I think I am going to be ok with what we have, and for which I am very grateful :)

I brought a few things from home, which make the place feel a lot more “homey” to me. The new sheets that I bought at Ikea [in Germany] fit our bed really well and I can’t wait until all the rest of my stuff has been unpacked and stowed away. You still have to wait a little longer for some pictures, but I am getting there!
J also had gotten this really cute desk for me at Pier 1 Imports [when he was still working there last summer] and he had been luring me with it all summer, as if this had any influence on my return to the US whatsoever ;) I really love! it though. It’s beautiful and it’s just the right size for my notebook and me!

Here’s to all the great people who persevered and stuck to blogging every single day for the month of November. It has truly been a blast and I had some much fun using the NaBloPoMo randomizer and checking out your blogs.

I can’t wait for next year’s challenge! 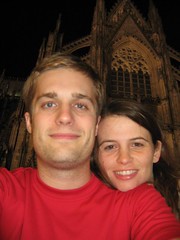 So it’s back to LDR again.
The last week with J was awesome. It’s amazing how much more important every minute of the day seems to be if you know that you only get to spend a couple of days together with your honey.

J arrived on Thursday, September 1st. I picked him up at the airport and surprised my Mom and Dad. They both thought I was visiting one of my friends when I showed up with him at home. Surprise = successful :)
In the evening we showed up at my sister’s place. She was totally flabbergasted to see J as well. I guess it really is baffling somehow if someone, who you expect to be 6000 miles away on a different continent, shows up out of the blue.
We also surprised my great-aunt and granddad on Friday afternoon, but we gave them a fair warning, because I was afraid that they would get a heart-attack if J just turns up on their doorpstep.

Friday night, Nina, J and I drove to MÃƒÂ¼nster. Dirk plays soccer for PreuÃƒÅ¸en MÃƒÂ¼nster in the Regionalliga Nord and we got VIP passes. It was awesome. I have never been to any of Dirk’s soccer matches before [yeah, yeah, please don’t ask me why], but it was fun! Having a VIP pass, we were allowed to park in a special parking lot behind the stadium, we had access to the VIP area [where you get free drinks and food] and roofed grandstand seats :)
J was all excited. He totally enjoyed being there and seeing Dirk play. I usually don’t like soccer matches that much, because some of the fans really go overboard during the matches. So did the fans of Armenia Bielefeld, who were yelling some really unpleasant things and also threw firecrackers into the adverse fanblock.
In the end, MÃƒÂ¼nster won and Dirk came up to the fence and shook our hands. Yeah, there might have been some jealous fans standing behind us… I must admit it was kind of cool to call one of the players my brother-in-law :)