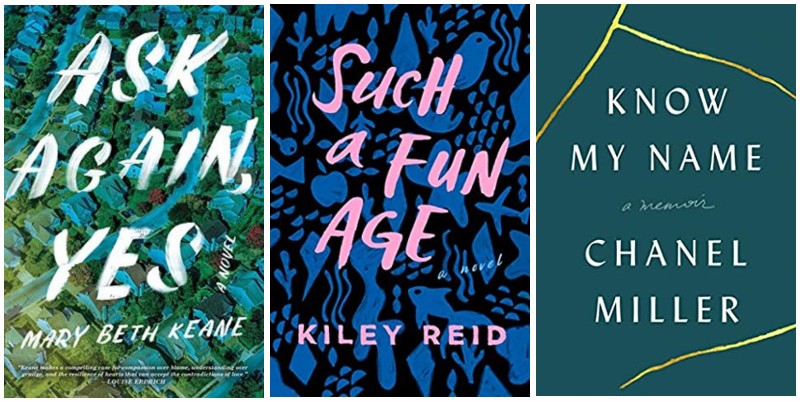 I finished three – very different  – books in June. All of them worth your time, if you’re looking for some new reading inspiration.

This is the story of two neighboring families, the Stanhopes and the Gleesons, the friendship between their children, and a tragedy that reverberates over four decades. The book explores mental health issues, alcoholism, immigration, abandonment, marriage, toxic parent/child relationships, and violence, but also love, dedication, perseverance, and hope.

I am always a  little bit extra critical when a book involves mental illness. It’s often used as a tool to create drama, not so much for advocacy or ending stigma. While I feel mental illness has been exploited a bit for the sake of the narrative of this book, I also found there to be a lot of understanding, healing, forgiveness, and grace throughout the story. Definitely, a family drama that will stay with you and give you lots to think about.

I wasn’t quite swept off my feet by this book like other people who have read it (according to Goodreads reviews), but overall it was a good, thought-provoking read. My main issue was that the characters felt dimensionless, either oversimplified (Emira) or overexaggerated (Alix) and I didn’t feel like the plot was well-thought-out.  It did however blatantly display how difficult it is to write about racial issues in nuance, especially when bouncing back and forth between two first-person narratives.

I read in one of the other reviews that it seemed like there was not a single “normal” character in the book and that a normal cross-racial relationship apparently cannot exist without ulterior motives or underlying bias. I found myself agreeing with that observation and found this in itself to be a rather biased assumption. The highlight of this book for me was the sweet and genuine relationship between Emira and Briar, the little girl she babysits.

This is the memoir of the young woman, initially known as Emily Doe, who was sexually assaulted behind a dumpster on Stanford Campus while unconscious by Brock Turner, who in the news was called a nice boy and aspiring Olympic athlete. As if his accomplishments could take away from the horrible thing he did.

Chanel takes us on her journey through the emotional turmoil of being assaulted, the court system, the horror and humiliation of reliving her trauma again and again, and the constant victim-blaming. Let me say this; NOTHING that someone did excuses being sexually assaulted. Chanel is a brilliant writer with a powerful voice and you need to read this book.

What did you read in June? Anything you’d like to recommend? Leave a comment, and then add me on Goodreads to keep in touch.