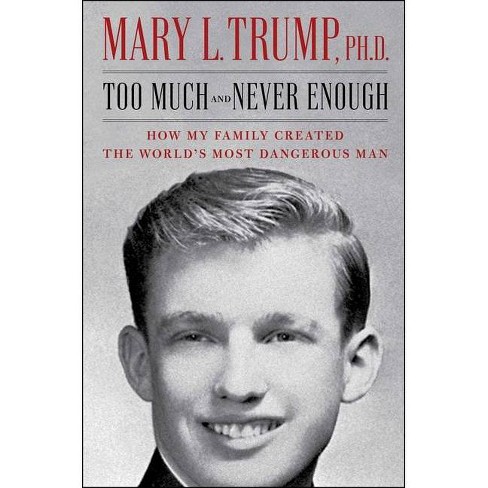 My reading was all over the place in September. I actually picked up a total of 4 books, but only finished one, so the review for the others has to wait.

Too Much and Never Enough: How My Family Created the World’s Most Dangerous Man by Mary Trump (★★★★☆)

I must admit, when I heard about the book, I was instantly intrigued. Not because I wanted to read one more word about Donald Trump than absolutely necessary, as I am honestly more than fed up with this man, but because I knew that Mary Trumps perspectives would come with her professional qualifications as a clinical psychologist and through a (maybe somewhat) biased lens of her personal experiences. That was to be expected.

I felt, for one reason or another, that learning and understanding more about  their family background would somehow make me feel better. (Spoiler alert: It kinda did and it didn’t.)

There are many things she didn’t, and couldn’t, cover that would have been interesting to know, but my guess is that she tried to stick to areas that she could verify and areas that she had the most personal knowledge about. Speculating is what we have all done enough as we’ve become professional arm-chair psychologists over the last few years.

I can’t say that anything in her book really surprised me, as the behaviors that she describes are what we see from Donald Trump on television every single day, but her disclosures about her family life really put a lot of things into context.

Mary doesn’t excuse her uncle, but she explains him.

So much of Donald’s erratic and immature public actions make even more sense in the context of his upbringing and dysfunctional family dynamics. He has been the victim of an overpowering, sociopathic father and mostly absent mother.

When Mary’s father, first-born Fred Jr. couldn’t live up to his father’s expectations, Donald was chosen and groomed to be the successor in the family business. His father enabled him to be antisocial, unaccountable, and superficial by not punishing him for misbehavior and essentially providing him with a bottomless well of cash flow and bailout money.
Eager to please, Donald did everything his father wanted, often by trampling on his own siblings. He’s never heard a “no” in his life. Not from his family, not from his father’s business partners, banks, or the media. It’s kind of mind-boggling that nobody has ever stood up to this – deep down inside – insecure and needy man.

You might think that learning all of this might make you feel empathetic to Donald Trump, but I have a hard time feeling empathy towards someone, who’s so blatantly opportunistic, claims to know everything, can’t care one bit about other people on a fundamental level, and who continues to treat others with so little respect.

I know we all are tired of hearing about and from Trump on the daily, but I still thought this book was worth my time. I feel like I got some answers, albeit unsatisfying ones, to the question how on earth a person can turn out the way he has.

What did you read in September? Anything you’d like to recommend? Leave a comment, and then add me on Goodreads to keep in touch.