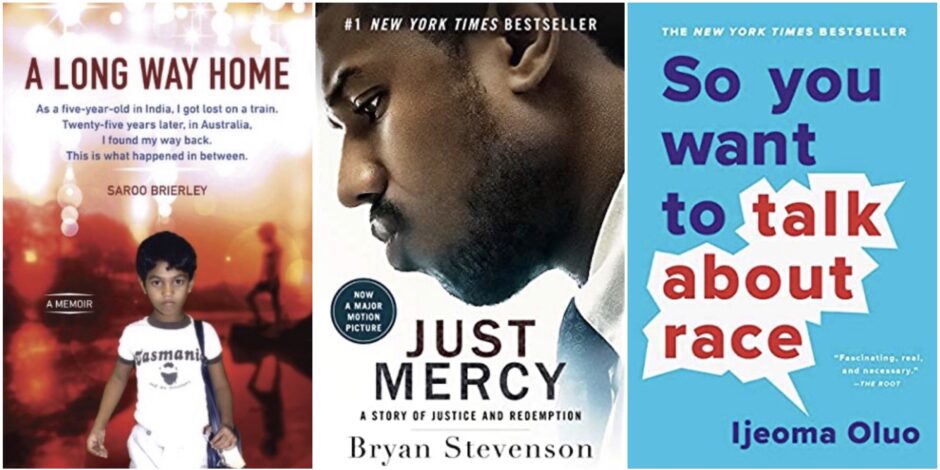 Better known as a backstory for the movie, Lion, in this autobiography, Brierley tells his life story, describing his ordeals and adventures as a lost five-year-old in rural India, his adoption by an Australian family, and his search for his Indian native family as an adult.

It reads like fiction and it’s hard to comprehend what Brierley has been through. Just imagine getting lost when you were five and not being able to find your way back to your family. It sounds unimaginable and almost too good to be true that he was able to track down his roots years later.

Read his story, I promise it won’t disappoint!

Strangely, this book made me think of all the kids that came here as refugees and were separated from their parents by ICE, and some of whom will probably never be reunited. What an unthinkable tragedy!

Just Mercy: A story of justice and redemption by Bryan Stevenson (★★★★★)

This book had been on my to-read list for a while and it finally became available. A lot in this book sounded familiar, and I remembered that I had read ‘The sun does shine” by Anthony Ray Hinton who was also freed by Bryan Stevenson, but this book talks about Bryan Stevenson’s own story of becoming a civil right’s attorney in Alabama and founding the Equal Justice Initiative, a nonprofit law office, dedicated to defending the poor, the incarcerated, and the wrongly condemned.

This books tells the story of EJI’s first client, Walter McMillian, who was put on death row for a murder he didn’t commit and eventually freed by Stevenson and his team.

This book was really good. I’ve read a few anti-racists books recently, but this one was by far the easiest to digest. I mean, not “easy” in the way that it’s an “fun” book, racism is a heavy topic, but I felt that Ijeoma made this topic really accessible. There was a lot I just “nodded” along because on a theoretical level, I “knew all this” already, but there were also some things I really hadn’t considered (because, well, the situation hadn’t presented itself to me and this is not an excuse, but having been raised in Europe, I think my upbringing and socialization was a little different from being brought up in the United States. There definitely is racism in Europe, and everywhere else  in the world, I’d argue, but I think it’s different from the structural raciscm in the United States that originated from chattel slavery.) Oluo did give some good examples on how to change behaviors, because I will admit that I often agree with a lot of what is said about structural racism, but feel helpless in how I personally can make a difference.

We have to get comfortable with the word “racist” (as someone who not necessarily feels, but shows – maybe unknowingly or even unintentionally – discrimination or prejudice against POCs) and just challenge our learned behaviors and thinking patterns.

What did you read in August? Anything you’d like to recommend? Leave a comment, and then add me on Goodreads to keep in touch.