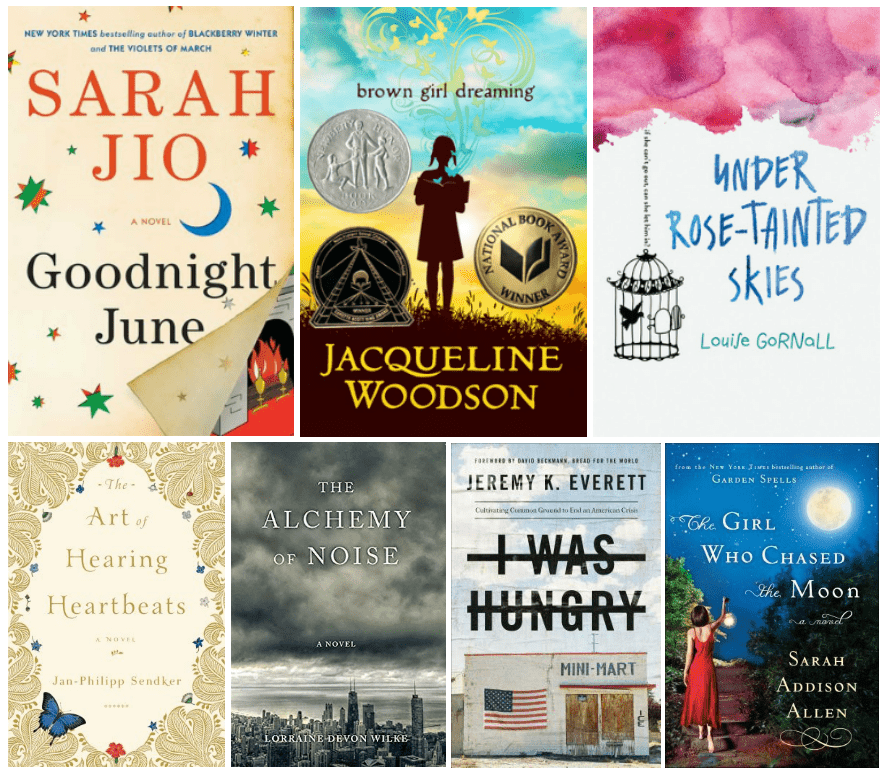 Phew. Seven books in September. I am liking it and wouldn’t mind for this to continue. I enjoyed all these books, don’t let some of the lower ratings fool you too much. I can be critical sometimes when plots are not coherent or resolve too conveniently, but all of these books were definitely worth my time (and maybe yours!)

Jio explains in the preface what inspired her to write the story and she builds it around the Margaret Wise Brown’s famous children’s book “Goodnight Moon” and how it may have come about.

Successful NYC banker June Andersson inherits her beloved aunt Ruby’s bookstore, Bluebird Books, in Seattle and must return to her hometown to sort out her affairs. In the process, she learns that her aunt shared a deep friendship with Margaret Wise Brown, through a string of letters between the two women.

While the story has its flaws, it was heart-warming and beautiful. I always cringe a little bit when the plot seems almost too convenient and things fall into place just a tad too easily, but Jio’s writing and the way she wove together two separate stories into a book of friendship, sisterhood, and family mystery, with a side of romance was just the kind of book I was hoping to read after some heavier topics in my recently picked books.

Under rose-tainted skies by Louise Gornell (★★★☆☆)

This YA book reminded me a lot of “Everything, Everything” by Nicole Yoon. Teenage Norah who lives with terrible anxiety and OCD is trapped in her own home, can’t even go to school anymore and has been in therapy for years, but then she falls in love with Luke, the boy who moves in next door. You can pretty much see where this is going. While I appreciated some deeper insights on what it can feel like to live with mental illness (apparently, the author also suffers from anxiety and OCD), I was also really frustrated with this book. First of all, the plot moves really slowly (so slowly that I had to keep myself motivated to keep reading) and really not much happens. And then I have a real problem with the notion that “love can cure mental illness”. It can’t and it won’t. This book did a better job advocating for people who live with mental illness, but knowing people who live with these challenges, I also thought Norah’s level of anxiety/OCD/agoraphobia was taken to the extreme.

Julia’s father disappears the day after she graduates from college and leaves her family in turmoil. A few years later, her mother gives her a love letter her father had once written to someone named Mi Mi and Julia decides to follow the address all the way to her father’s hometown in Burma (now Myanmar) to solve the mystery of his disappearance.

I can’t say that I didn’t enjoy the fairytale-style writing, descriptive and evocative language, and the love story behind it all, but as so often, I can get pretty critical with the details of a story, and there were definitely a few things that bothered me about the book. The story was mostly told by U Ba, who Julia meets in a coffeeshop upon her arrival in Burma and who claims that he’d long been waiting for her visit. Through most of the book, we don’t know how U Ba is related to the story and it’s odd that he’s able to tell her the story of her father in an almost omniscient voice. There is also a huge ‘beating the odds’ thing going on in this story, which is almost a little much, and a whole lot of unanswered questions in the end.

My rating hovers between 3 and 4 stars for me, but I gave it 4 stars because of the beautiful writing (Note: I read this book in German, I can’t speak much to the flow of the English translation and – if you follow me on Instagram – you know that I had some issues with it, because I noticed when I did a random page-to-page comparison, that some passages had been dropped in the English translation.)

The Alchemy of Noise: A Novel by Lorraine Devon Wilke (★★★★☆)

This beautifully written novel starts out as a regular love story about two people who happen to cross paths and fall head-over-heels for each other. But this is not a regular love story because Sidonie, the manager of a popular events bar in Chicago, is white and Chris, who she hires as the sound manager, is black. The book explores the hope of “love conquers all” and the reality that two different worlds still exist for white and black people in America. Sidonie and Chris experience this first hand and straddling the two worlds will be a challenge for them that could ultimately break them.

Wilke does a great job developing not just the two main characters of this book, but also the characters of their families and friends. You feel like you’re really getting to know them, almost feel like this story is real, because we all know people like Sidonie and Chris. To perfectly strike that balance of well-developed side characters without taking away from the main characters is the true art of writing.  At first, you might be taken aback by the fact that this book about racial tensions, was written by a white woman. However, Wilke’s note at the end of the book explains why she feels qualified to tell this particular story, and she does so with a lot of bravery and humanity. Definitely recommend!

I Was Hungry: Cultivating Common Ground to End an American Crisis by Jeremy K Everett (★★★☆☆)

I give this book 3.5 stars (as I struggled with the “Christian” approach and the organization of the chapters), even though I wanted to give it 5 for such an important topic: hunger and poverty in America. One in eight Americans struggles with hunger, and more than thirteen million children live in food insecure homes. I think Everett is doing incredibly important work and he calls upon people to  find common ground to work together, not compete against each other in the fight against hunger. He emphasizes the importance of a coordinated response to the crisis. When every organization is focused on doing ‘their own thing’, it results in duplicated efforts and at the same time creates gaps of services, while resources go underutilized.

The girl who chased the moon by Sarah Addison Allen (★★★☆☆)

This was a fun read, and don’t let the 3 stars fool you into believing that I didn’t enjoy this book, there were just a few things that ‘bothered’ me. First of all, this felt like a YA novel, even though it’s not labeled as one. When her mom passes away, 17-year old Emily has to move in with her grandfather that she has never met to a town where people apparently have bad memories about her mom. It sets Emily on a mission to find out what happened in her mom’s past.

Allen actually pursues two storylines in this book, Emily’s and Julia’s. Julia is an old classmate of Emily’s mother and has returned to the town temporarily to take care of some family business, when hers and Emily’s paths cross. Each character has a lot of baggage and I feel like Allen could have developed each one into their own story, but neither story was developed enough to stand on its own and the characters remained emotionally flat in many ways.

I enjoyed some of the magical elements in this story (Emily’s grandfather being a ‘real life giant’, changing wallpaper, the Mullaby lights, etc.), but also grew kind of critical about the predictability of the plot line.

What did you read in September? Anything you’d like to recommend? Leave a comment, and then add me on Goodreads to keep in touch.