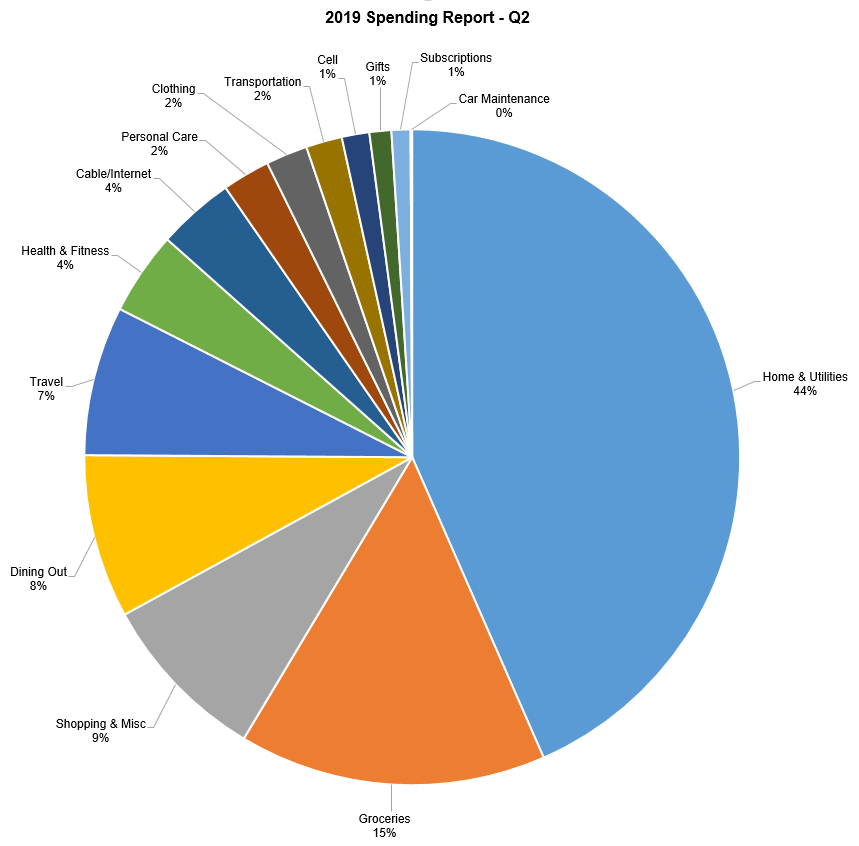 I can’t believe we’re well into the third quarter of this year, so who is ready to look back at our Q2 spending?

Our overall spending was actually down over the last three months compared to Q1 of this year, but that’s why the pie-pieces have shape-shifted a bit when it comes to percentages of spending. These quarterly updates show easily how spending varies throughout the year and why it’s so important to budget for your true expenses (e.g. save ahead for less frequent, but regular payments like insurance premiums that are due bi-annually or annually and also build up funds for unexpected expenses).

I think I mentioned in my last post that we’ve decided to open a FSA (Flexible Spending Account) this year to try and take advantage of some tax savings.  I am curious to see how that works out at the end of the year. You kind of have to know or anticipate what your expenses for the year are going to be and it’s an extra hit to my take-home paycheck. Unlike others – with a FedsFSA, you don’t get an FSA spending card, but have to pay upfront and then get reimbursed for medical expenses, so it’s a little bit of a trickier situation on the budget side. I do hope it’ll have been worth it when I assess at the end of the year.

So, let’s look at our spending. I pulled this handy pie-chart out of YNAB* (well, actually the pie-chart was done in Excel, but the report came out of YNAB.)

I have more subcategories that I track separately in my budgeting software, but I consolidated them a bit for the purpose of easier visualization. As a reminder: these are percentages based on money spent, not based on my (take-home) income.

Home (44% was 35% in Q1) – The spending for our (rental) home now includes rent, utilities, household items, and rental insurance. We actually spent a little less in actual dollars on this category over the last few months, but I guess based on other spending the percentage went up and made it a larger chunk of our overall budget.

Groceries (15% was 14% in Q1) and Dining Out (8% was 10% in Q1) – We also spent less on groceries and eating out in Q2 of this year, although the percentages have not changed much and I still think we could do better. When’s Aldi coming to NorCal? Sigh.

Shopping and Miscellaneous (9% was 3% in Q1) – Oops, we almost doubled our discretionary spending in Q2 but in included a concert, race entries, an outing at the County Fair and a couple of Amazon purchases.

Travel (8% was 6% in Q1) – That’s bascially the money I spent on my trip to Germany and what J spent back home (we called that his “staycation”).

Health & Fitness (4% was 6% in Q1) – This category includes my gym membership, and our medical and dental co-payments. I predicted that this was going to go down as I was expecting a refund for a dental cleaning that came through. Always check your billing statements, guys!

Cable/Internet (4% was 3% in Q1) – Slightly higher percentage this time, but same numbers bascially.

Transportation (2% was 1% in Q1) – Gas and parking fees. Even though I’ve been using the bus and bike more to get to work, our spending on gas hasn’t changed much (which could be due to fluctuating gas prices, and gas here is expensive in general, or that we used the car for a couple of day trips).

Cellphone (1% was 2% in Q1) – Expenses were the same, percentage went slightly down because of other expense patterns.

How did you spend your money in Q2 of this year? Do you have a FSA?

* This is not a sponsored post. I have not been compensated by YNAB for mentioning their product. I just share it for transparency’s sake. However, the post does contain an affiliate link. If you feel like you need a budget software in your life, download the fully functioning trial version and give it a shot! If you like it, you can use this link to activate the software and we’ll both get a month free!