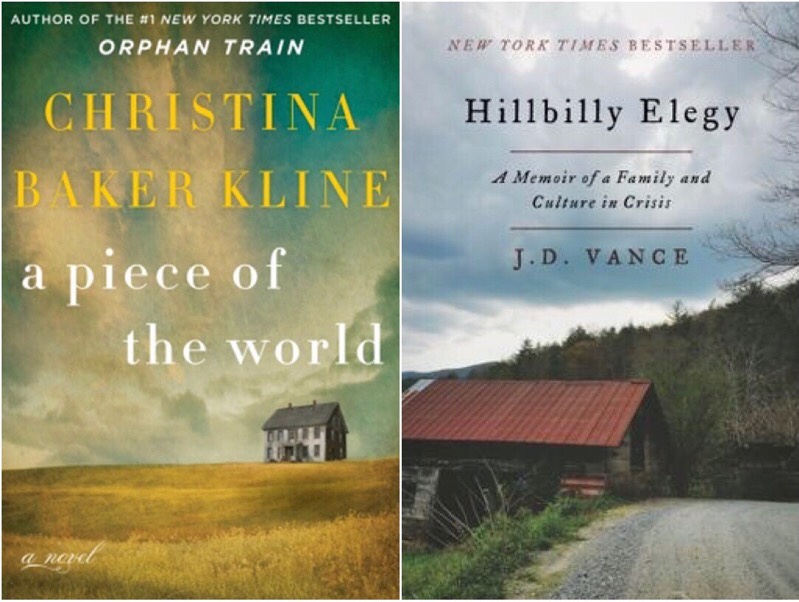 My reading list reflects my October. I was busy, and not with reading. I only finished two books, which puts some pressure on November and December to reach my annual goal.

This book was totally up my alley! The story, which is fictional, was inspired by Andrew Wyeth’s mysterious and iconic painting Christina’s World and is based on a true story.

Andrew Wyeth spent his summers painting in Cushing, Maine and he was especially drawn to the Olson House, where he met Christina Olson, who became a friend and muse. The story, however, is told from Christina’s point of view and alternates between her childhood memories, the onset of her debilitating illness (thought to be Charcot–Marie–Tooth disease) that left her with deteriorating use of her limbs, and her adult life and the friendship with Wyeth. Christina’s world was small to begin with, growing up poor on the family farm without modern day conveniences. It continues to shrink with the onset of her disease, when her parents pull her out of school to work on the farm when she is 12, and no prospect to leave when she realizes that no man will marry a cripple. Christina becomes stubborn and bitter (and who can blame her?), but she also shows incredible resilience and love for the place that imprisoned her her whole life.

The author did an amazing job of blending fact and fiction into a book that I simply could not put down. I also read one of Kline’s other books (Orphan Train) last year and also gave it 5 stars, because I really love how she combines history and fiction into compelling and well-written stories. I definitely have to check out her other books.

This was an interesting read and I enjoyed and appreciated J.D. Vance’s perspective on what it’s like to grow up poor. It’s nothing short of miracle, or so he says, that he was able to go to college and graduate from Yale law school, considering his upbringing.

Others have emphasized the need to approach this book as a memoir, not a social or political commentary or researched-based approach that explains what’s wrong with modern day America. I would have liked if he had examined broader structural and systemic problems in the working class, but I realize that even though he grew up there, he isn’t the expert on societal studies of his people. He can only share what he experienced and saw, and analyze it from the point of view of someone who was able to escape and take an outsider’s perspective. A few times he tried to explain certain behaviors (e.g. he didn’t understand that friends would jeopardize or quit decent paying jobs), then turned around and excused their behavior on the grounds of their upbringing.

The real take away from this book for me was how crucial a stable environment is for the developing brain of children. Vance talks about ACE’s, Adverse Childhood Experiences, which are traumatic events that have far-reaching consequences into adulthood. Incidentally, children with multiple ACEs are more often found among the working class and these “[children] are more likely to struggle with anxiety and depression, to suffer from heart disease and obesity, and to contract certain types of cancers. They’re also more likely to underperform in school and suffer from relationship instability as adults.” The answer, even though I can’t speak to specifics, would be to solve the root of these problems rather than just throw resources at the symptoms (although I recognize that this is much “easier” to do). This book is definitely worth your time, if only to gain a different perspective.

What did you read in October? Anything you’d like to recommend? Leave a comment, and then add me on Goodreads to keep in touch.