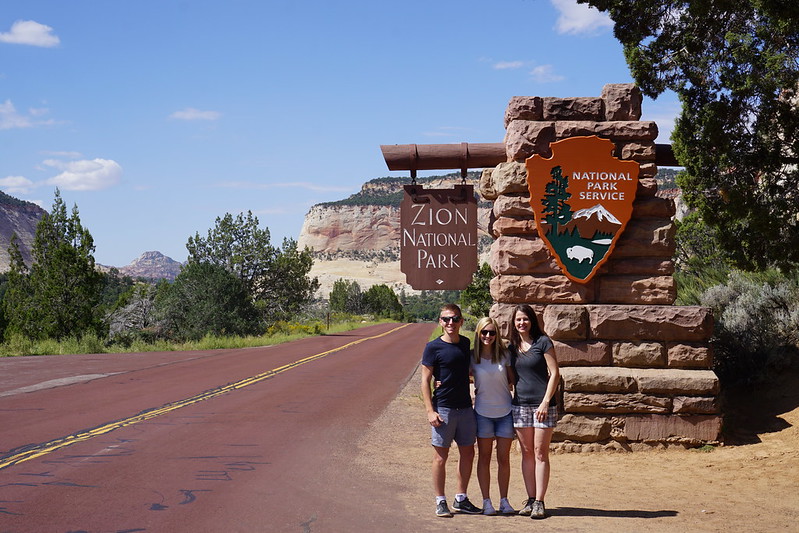 We spent one more full day in Zion in September and we headed back into the park in the morning to hike Angel’s Landing. I have to admit that I didn’t read up about the hike beforehand and didn’t quite know what awaited me except for the fact that it was going to be a “strenuous hike”. Okay, that could mean anything.

We parked our car at the visitor’s center again and took the shuttle bus to the “The Grotto” where we entered the trailhead.

First, you cross the Virgin River and walk along the river channel for a while. Then the hike climbs vigorously to reach the elevated mouth of Refrigerator Canyon. 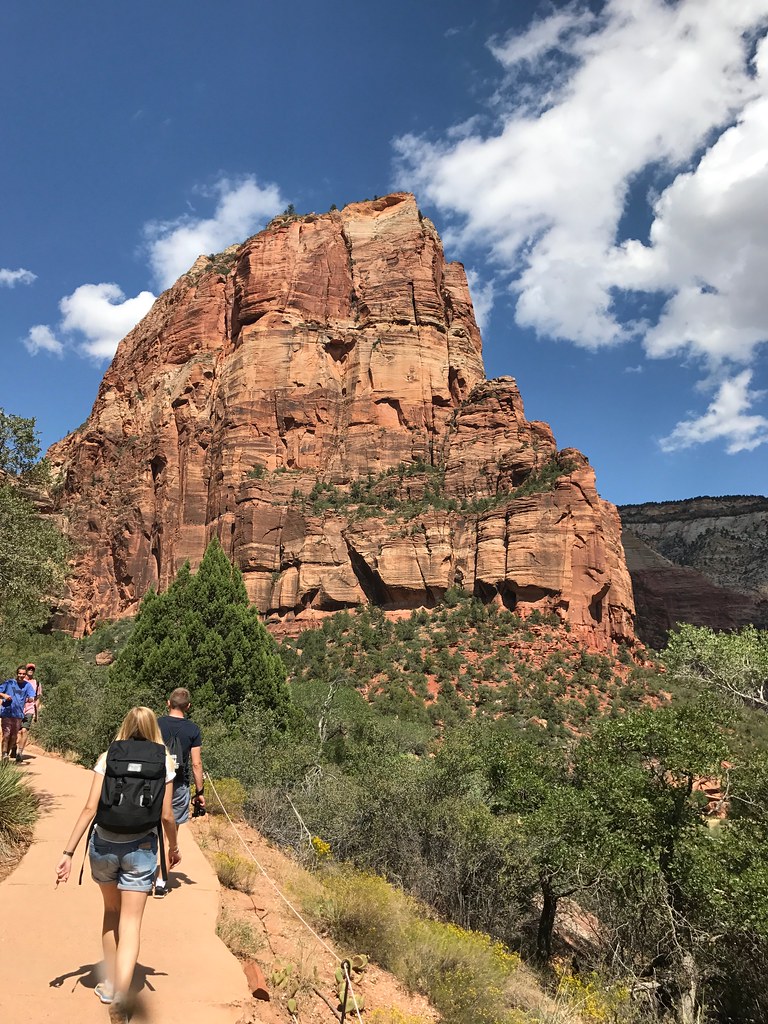 If you take a look at the photo, you can see people climb  the switchback trail up this canyon wall. 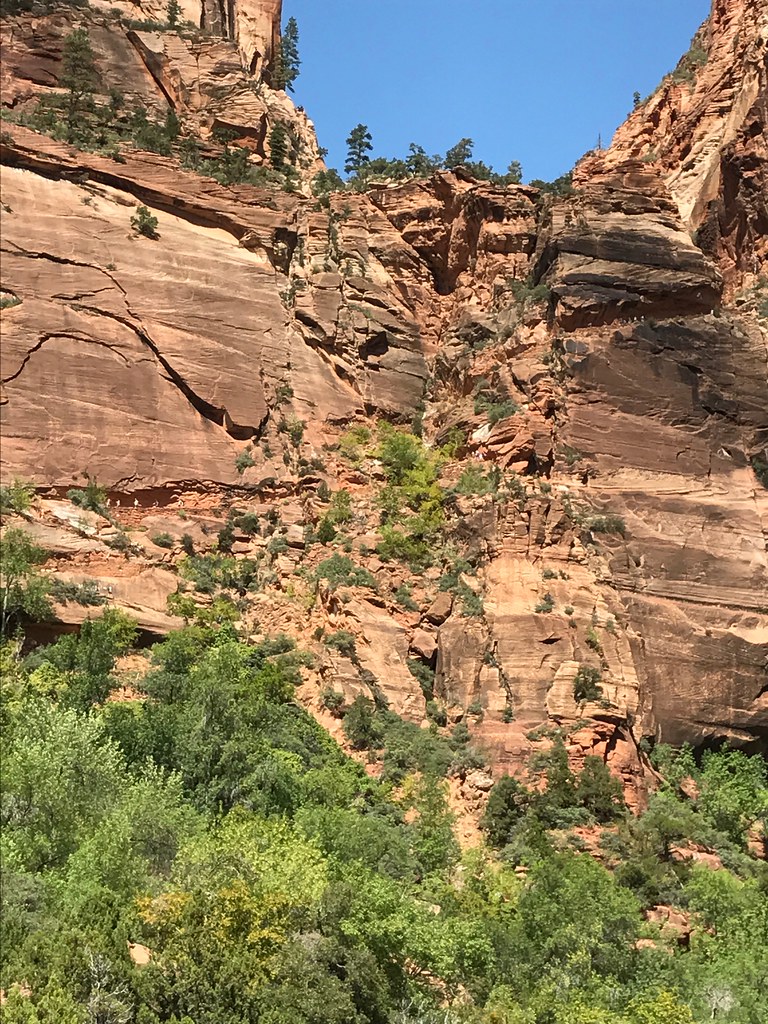 Most of that part of the hike was well built-out and paved, so it was a relatively easy climb (despite the altitude gain). Well, and the views were amazing. 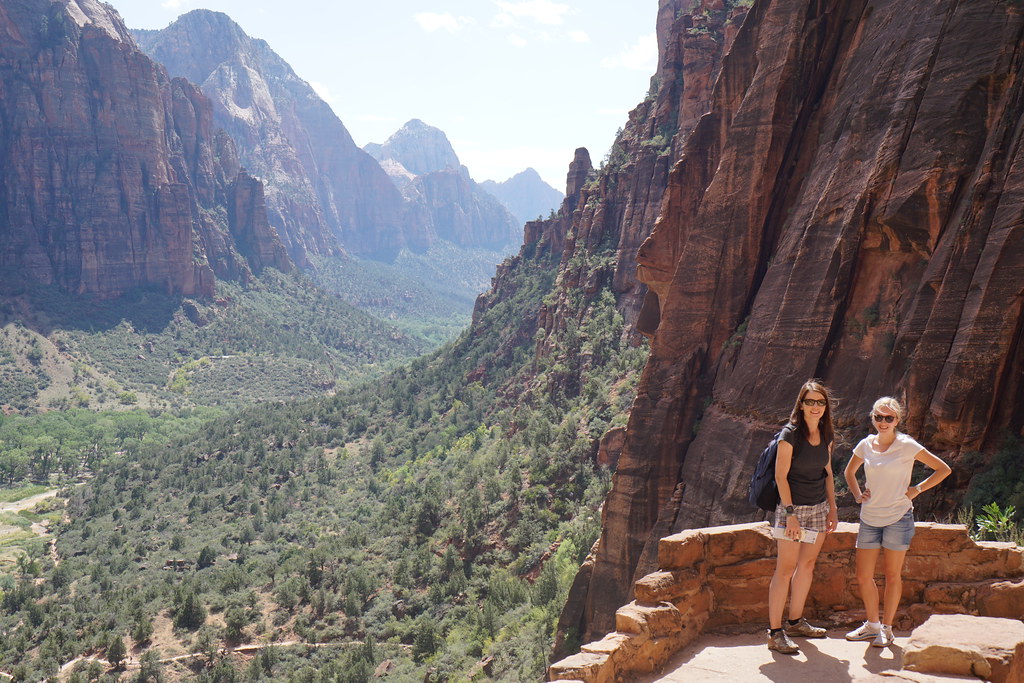 The trail levels off when you enter  ‘Refrigerator Canyon”, a cleft that is significantly cooler than the first part of the trail and offers some cooling relief from the sun. 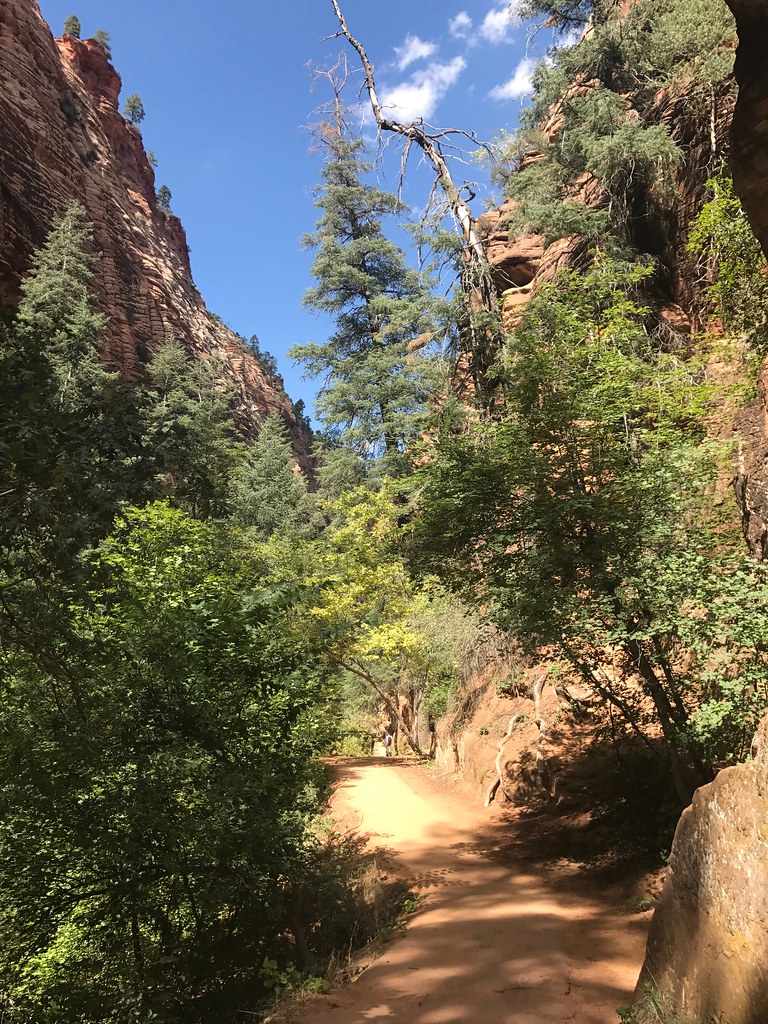 This was only a small breather though before you enter a strenuous ascent of 21 steep switchbacks called “Walter’s Wiggles” that were built into the stone wall.  I mean, I expected something like this, we had to gain some altitude after all. 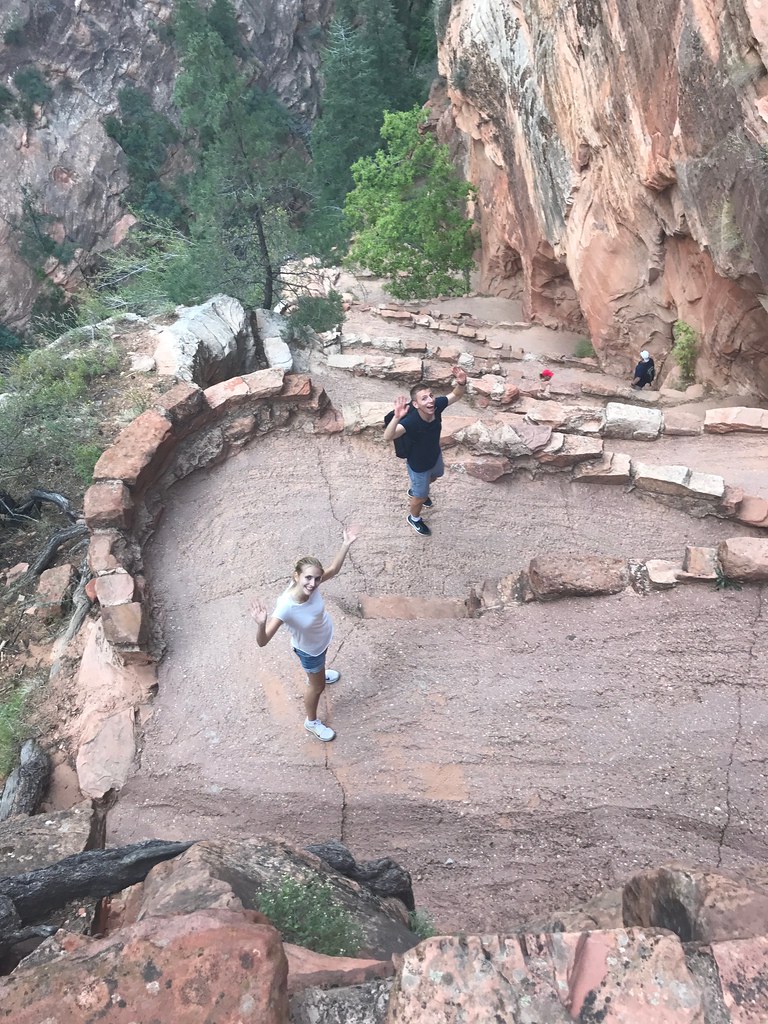 Shortly after conquering the switchbacks, we mad it to the halfway point, Scout Lookout. First I thought that this was it, the top of the hike, but far from it. While the lookout offers some beautiful aerial views of Zion Canyon, this is not the top. Many people stop here instead of going all the way and I was soon to find out why. 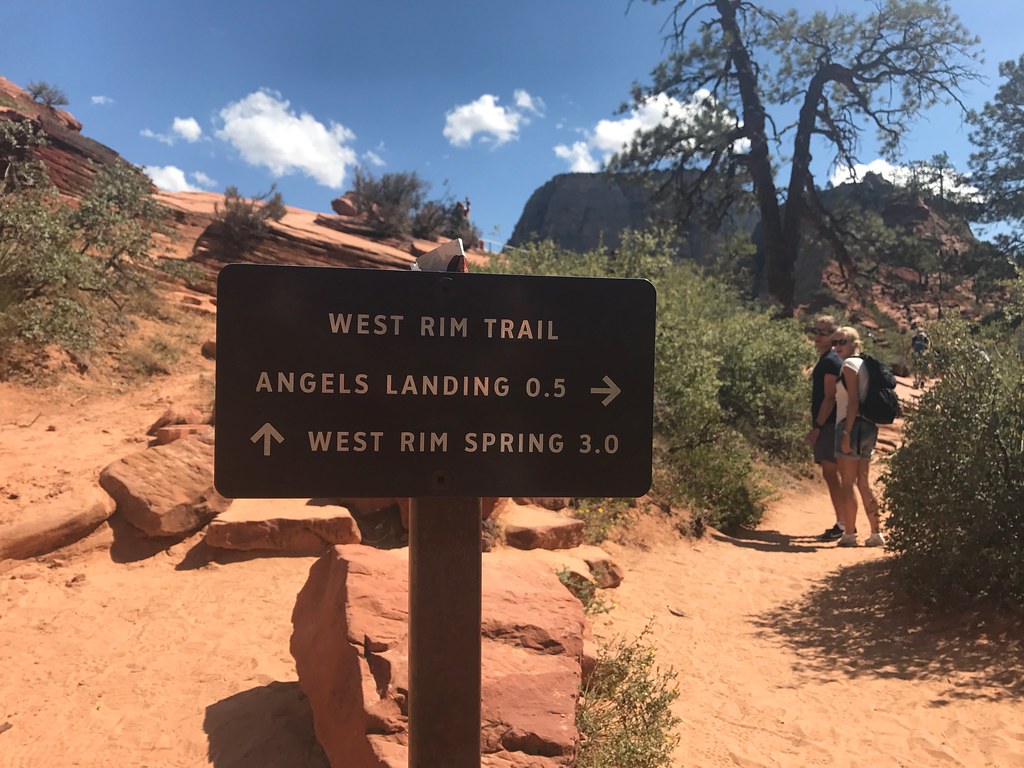 The top of Angel’s Landing was only another 0.5 mile ahead, but here begins the really strenuous part of the hike. This is not for people who have fear of heights.  We took a quick break, had some water and a snack and I contemplated for a minute if I was going to do the last part, but of course, I hadn’t come all the way to chicken out now. This part of the hike is definitely adults only. Although I’d like to add that just making it to Scout Lookout is worth it in itself (even if you decide that the last part is not for you or if you want to bring your kids). 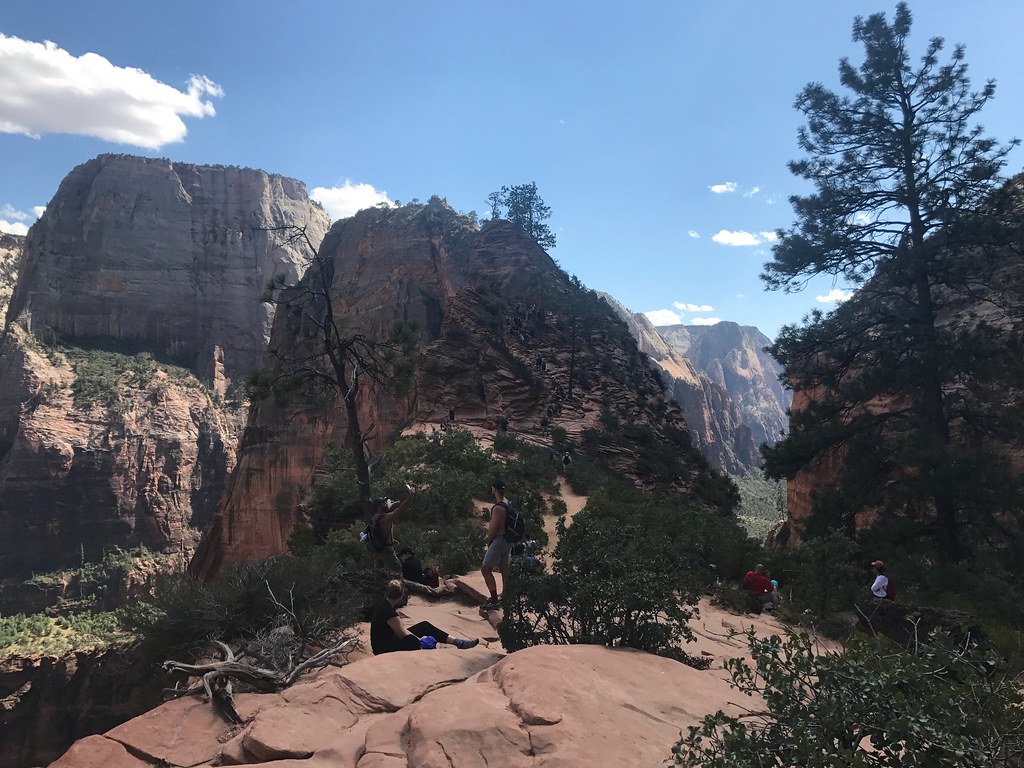 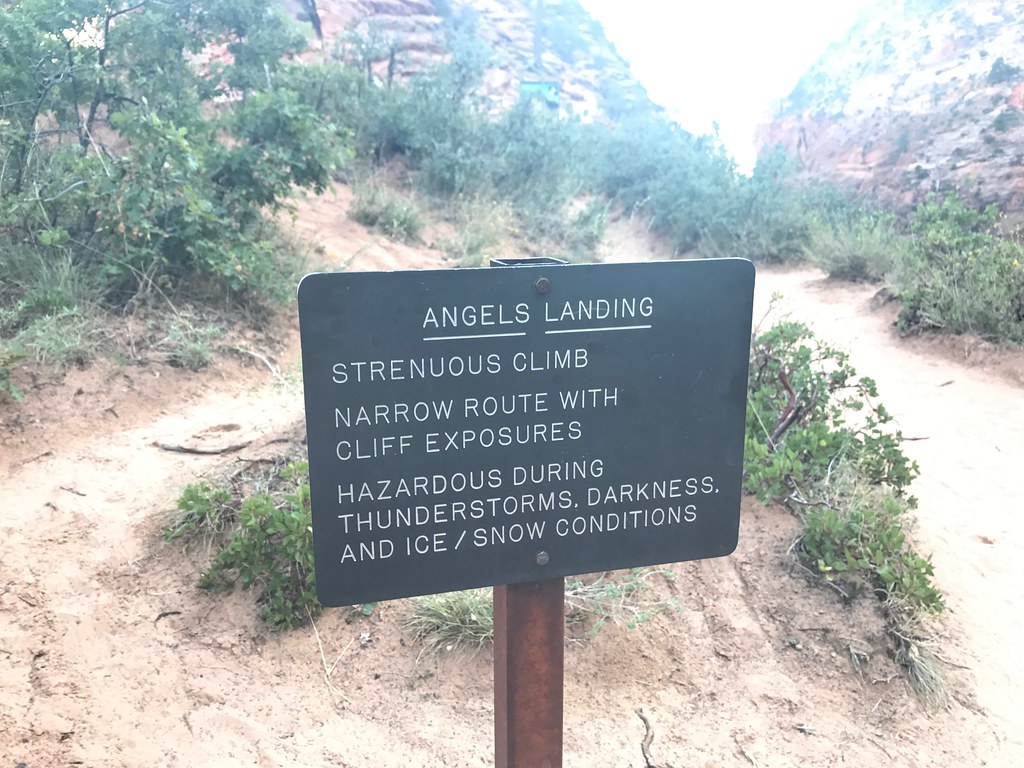 One deep breath and we were off on the actual climbing part of the hike.

As we continued going upward, the trail follows the spine of a  ridge, with heavy chains attached to the rock to serve as handrails along most (but not all) of the drop-offs. In some spots, you’re literally standing on a ledge with sheer drop-offs on both sides and more than once I questioned what I was doing here. It was crazy. But also beautiful and exhilarating.

While most of the hike looked much worse from the distance than when you were actually on the trail, there were definitely some spots where you just had to take a deep breath, keep your eyes on the trail and say “I am doing it” to move forward. We definitely wondered a few times how this hike is even permitted for the general public. (I doubt a hike like that would be approved in Germany.) But the rush of adrenaline was amazing. Definitely one of those ‘life-changing’ moments where you surprise yourself and think “I really did it!”. 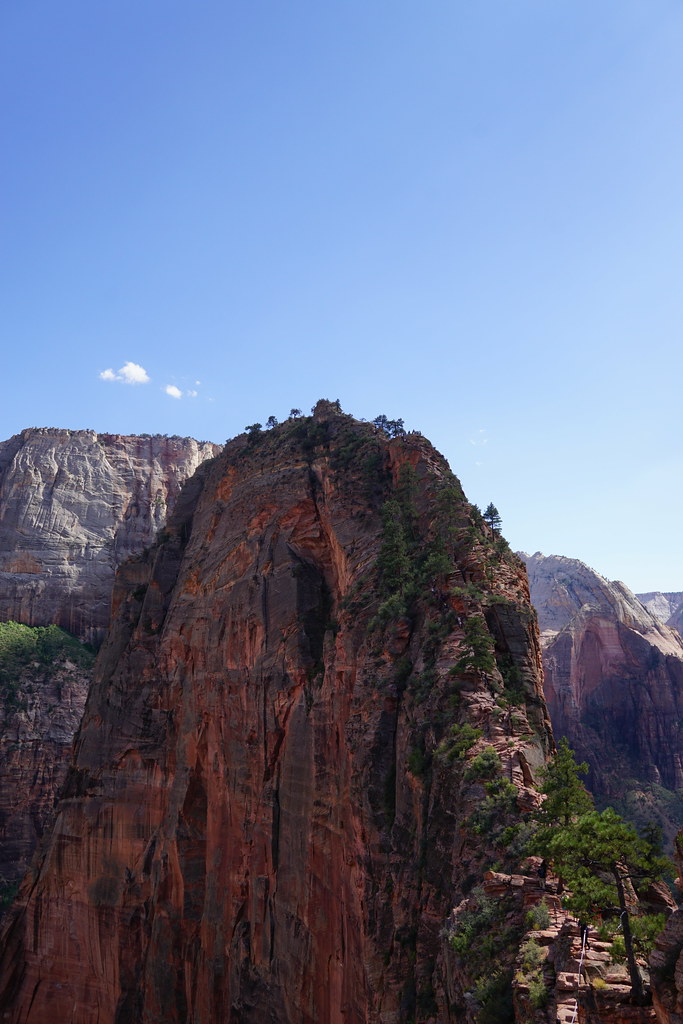 What can I say though, the feeling when we reached the top was overwhelming. I had to sit and process for a minute what we just had accomplished. 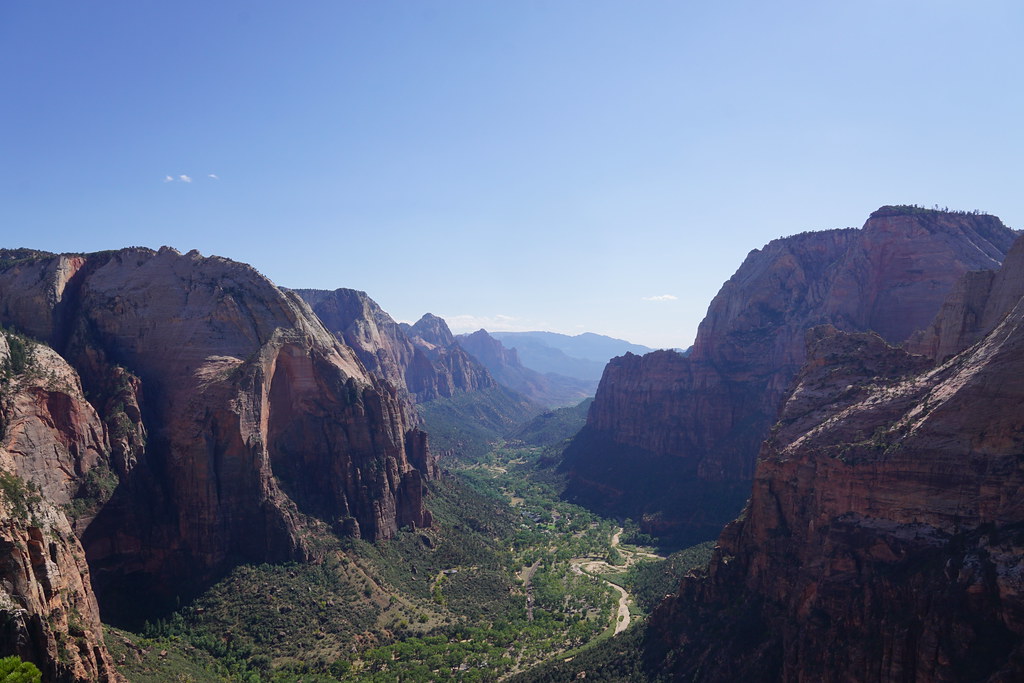 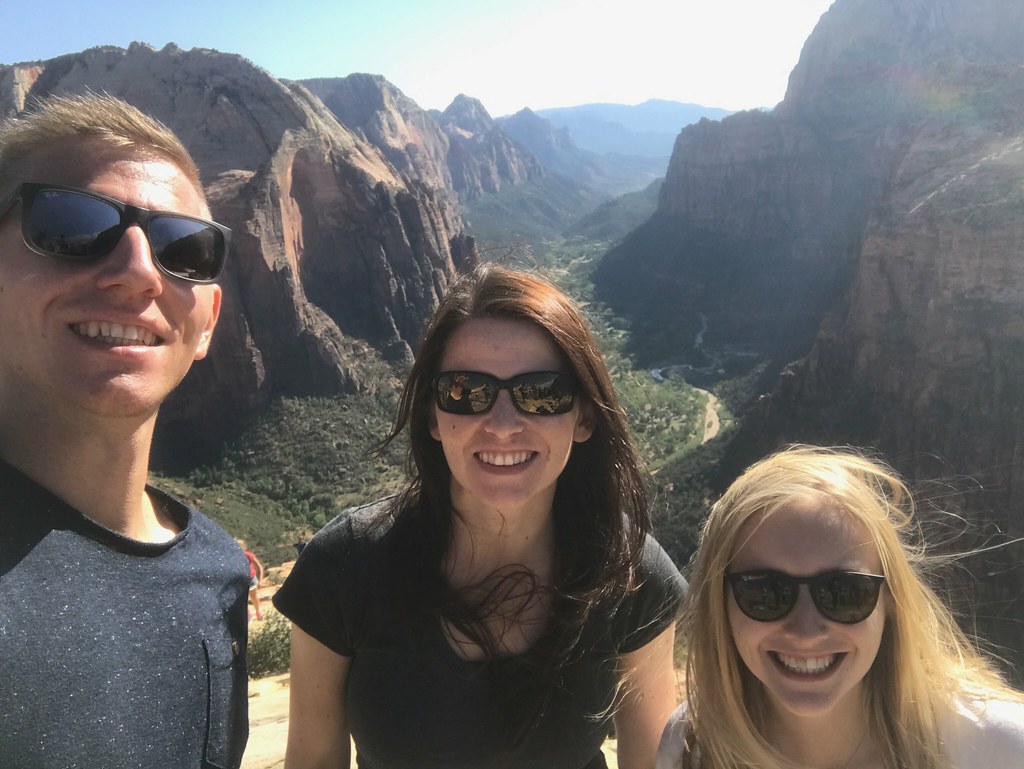 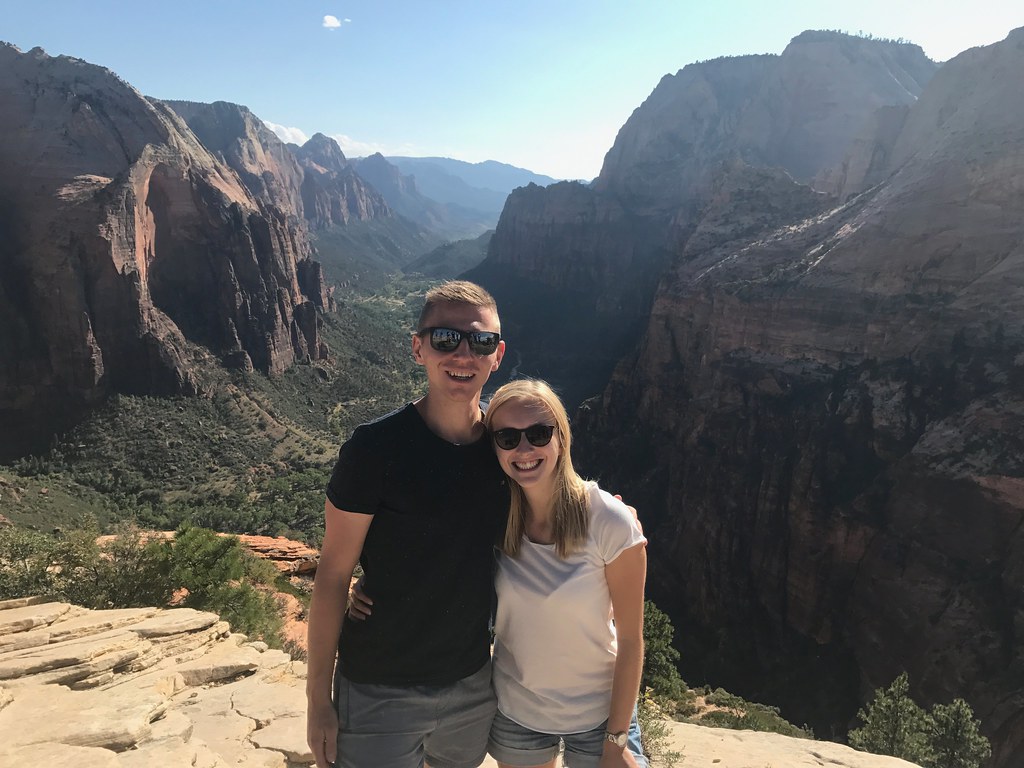 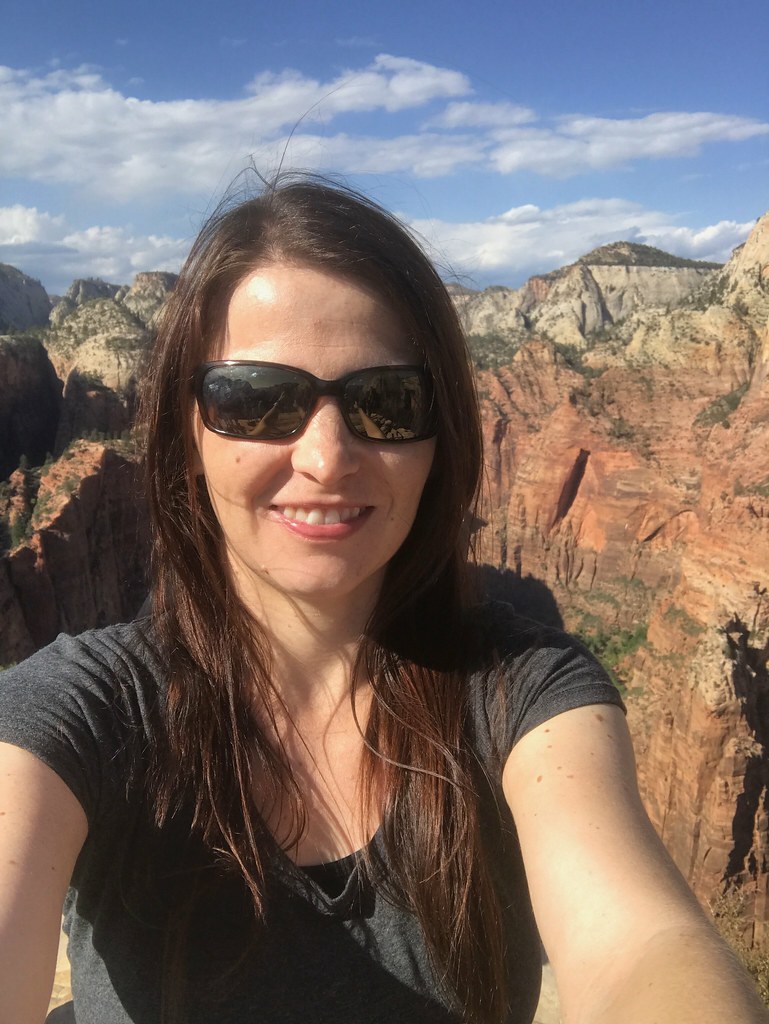 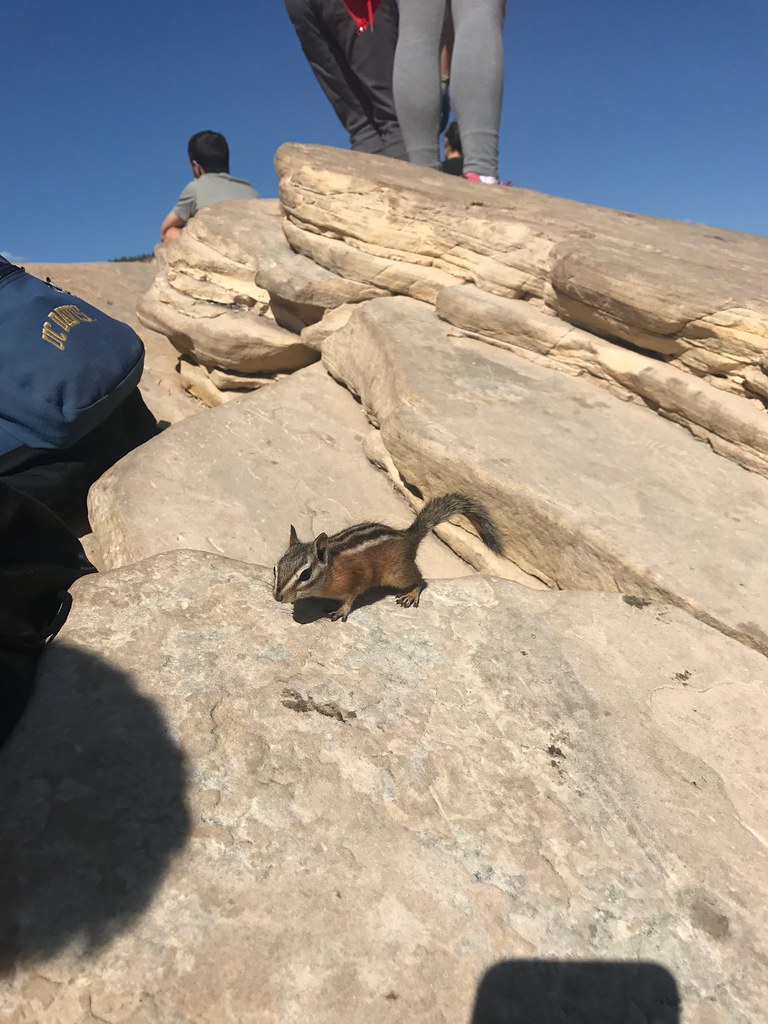 We spent maybe an hour at the top enjoying the views and taking it all in. 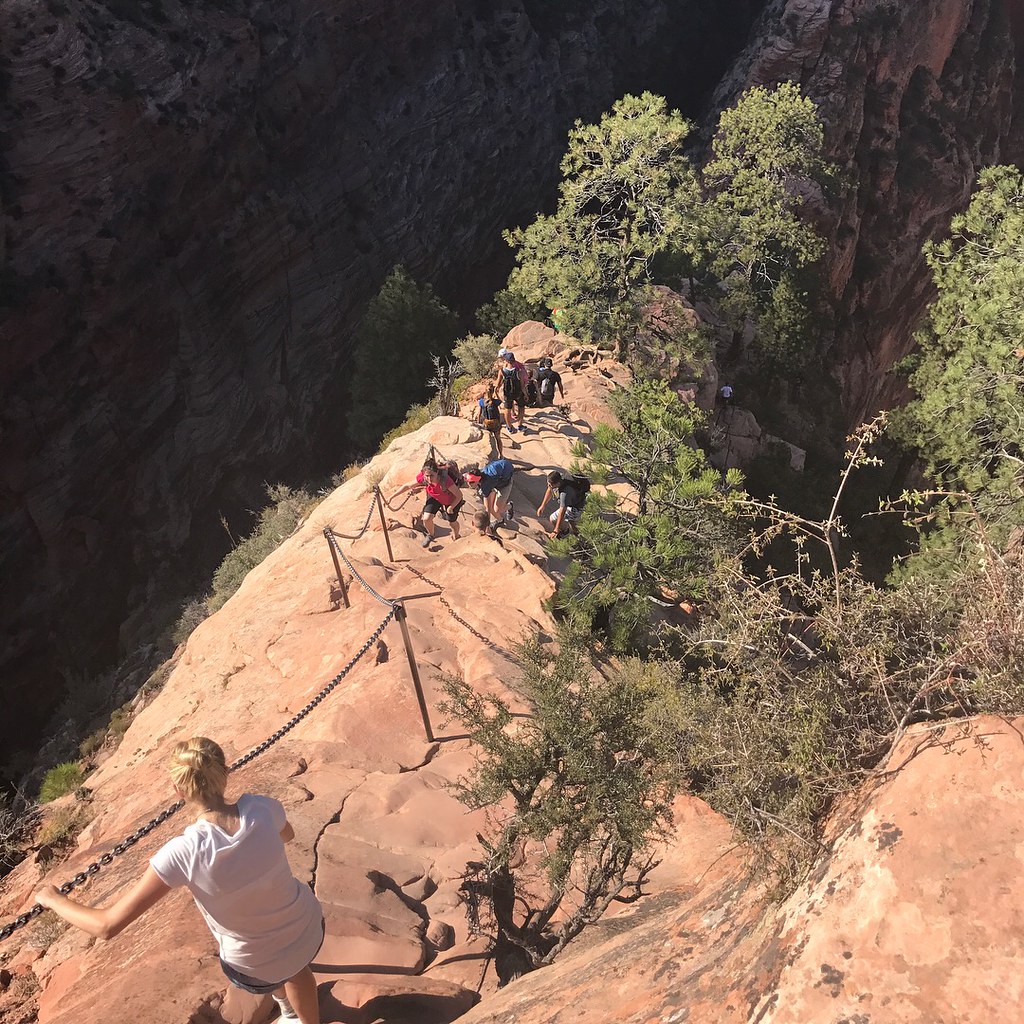 When we headed down, I snapped one more picture of the steep climb. Crazy that they let people scramble around on these rocks, right? 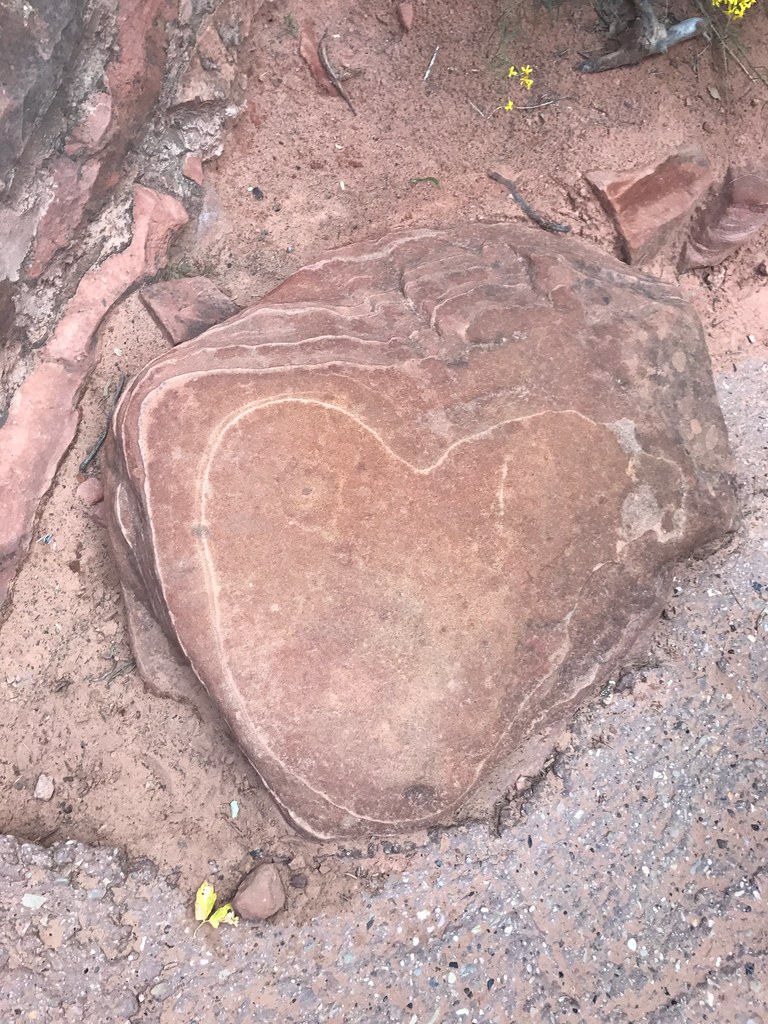 The descent was pleasant and we got ‘lucky’ and saw another tarantula when we passed through Refrigerator Canyon. This time, we were much more relaxed about the encounter. 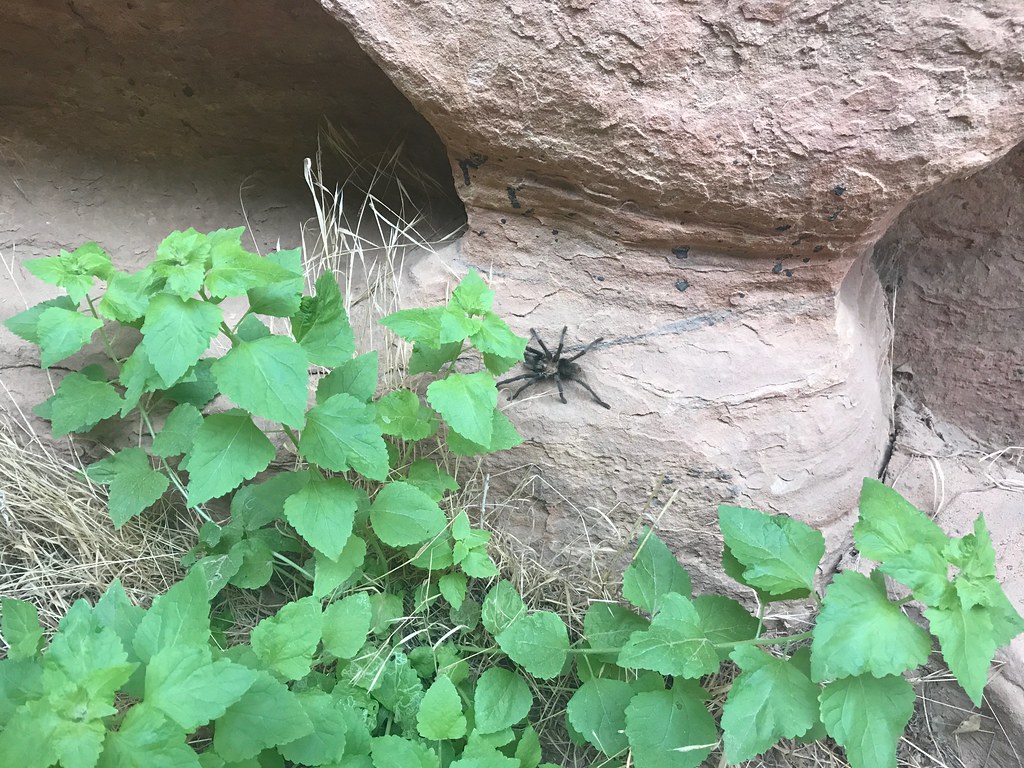 This is a view down on the trail along the rock face that I pointed out earlier in this post when we hiked up. Different perspective, eh? 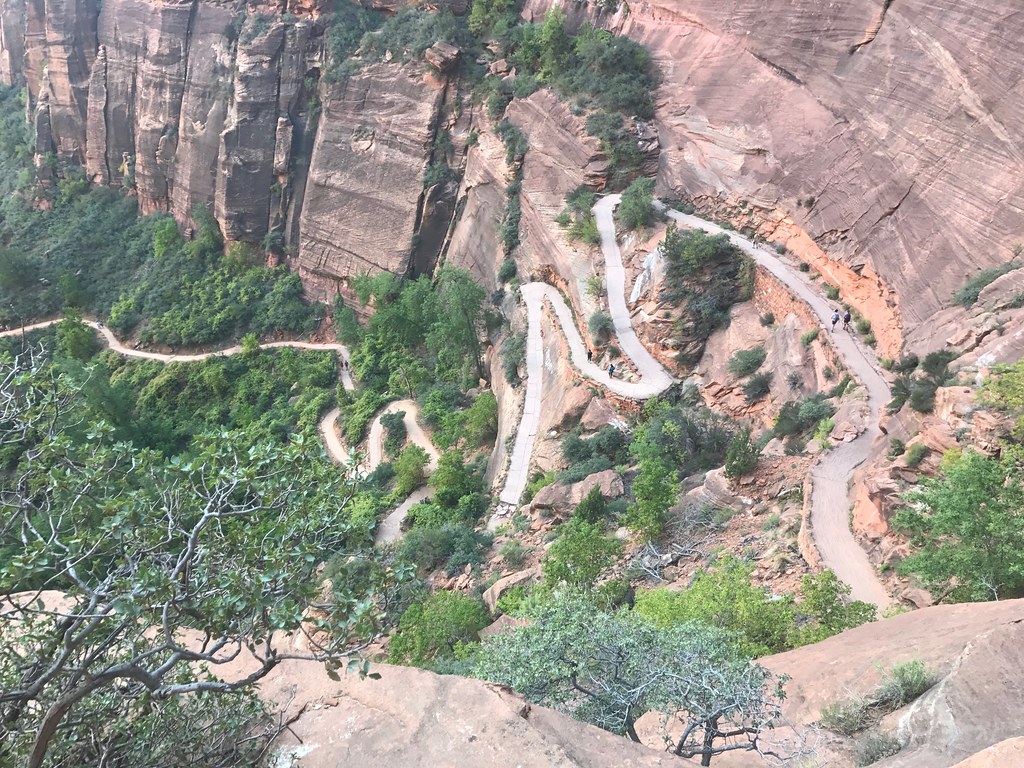 This was definitely a once-in-a-lifetime experience (although I do hope that I might get another chance to hike this beautiful trail again!). If you ever think about visiting Zion, I would highly recommend you do this hike (if you’re not afraid of heights!). You won’t regret it.