I started this series “Things you wouldn’t know” a while back, because as an expat, living in a different country away from home, you encounter a whole lot of things that are just different from what you’re used to. Some things are significant, others barely noticeable. After 10+ years, I am pretty much used to most things in the US and I hardly ever bring up when something is different from back home. Every once in a while though, you strike up a conversation and while you’re talking about something, you realize that your counterpart is giving you this strange look of non-comprehension. Let me tell you about one of my recent experiences.

When I was in highschool and college, I had a bunch of odd jobs. I babysat, I worked for the veterinarian next door (great, but often sad job!), I waited at an ice-cream place (that’s the closest I ever came to waiting tables), ​I was a receptionist and during semester breaks, I worked as a mail carrier.

It was one of the coolest and worst jobs I ever had.

You know how there are certain things that you’re just taking for granted because this is what you grew up with and you don’t even consider that there is another way of doing things? I mentioned in one of my last posts that I had a lovely chat with the lady at the post office the other day. I was buying a bunch of international stamps and she asked if I was mailing something for a special occasion. I said no, I just liked to write and send letters. She smiled. We started talking and I mentioned that I worked as a mail carrier in Germany when I was in college and that, as an avid letter writer, the best part of my day was delivering personal, handwritten letters and packages to people. This was the coolest thing about my job.

I must have mentioned that I delivered the mail by bike, which made her stop dead in her tracks, because she was in obvious disbelief. YOU DELIVERED MAIL BY BIKE?
She couldn’t fathom how that was even possible. I tried to explain that we had special bikes, heavy bikes with build-in front and back storage space for boxes/mail bags to transport the mail. I told her about the kick stand that would hold the bike upright when parked – even with 60 pounds of mail loaded on the bike. I also told her that, since you couldn’t put all the mail of your district on the bike at once, there were locked boxes along your route where you could “re-load” your bike. She was baffled. I quickly googled an image of a German postal bike to show her what I was talking about and her jaw literally dropped to the floor. 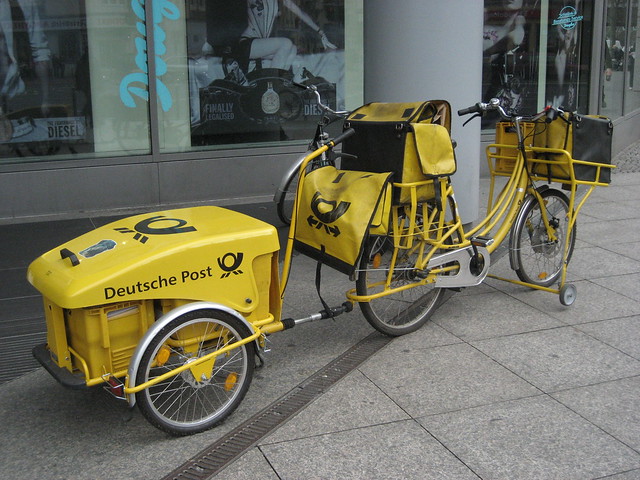 This is what a German postal bike looks like (well, I personally never head one of those trailers — they might be new or just available in some cities). And yes, we also delivered mail in the snow during the winter months. It’s been a few years since I did this job, so I am sure they’ve come up with a lot of new ways to improve the bikes and ways to get around (I read somewhere that some of the bikes have little motors now that can be turned on when necessary).

I know that in bigger cities, mail carriers also use these push carts to deliver mail. They’re more convenient than bikes when you’re literally just walk from door to door. 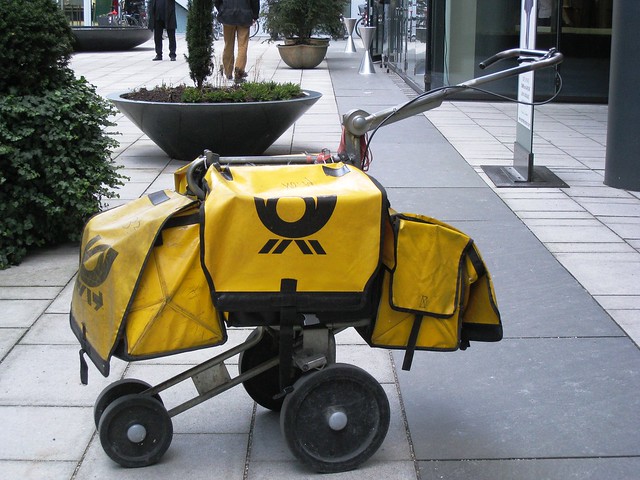 I guess, if this is something that you didn’t know about Germany (or other countries), it might be quite shocking. Haha. Who wants to pedal around 60 lbs of mail, you might ask. Well, it’s quite the workout, that’s for sure! And you don’t need to think that they make it “easy” for the carriers by putting the mailboxes conveniently on the street. You literally have to go up to every front door (well, besides apartment buildings which have all mailboxes located  at the main door or in the entrance hall way).

I loved the job, especially during the summer months. You were outside all day, you were able to work at your own pace and get a sun tan and workout in at the same time. I mean, that’s a double win in my book. Getting up early though was hard. I usually started work around 5:30 a.m. and while I love to start my day early (I start work at 7 a.m. right now), that was a little bit too early even for my taste.

Also: in the winter? The job sucked! Being on the bike – snow, rain or shine – was tough. Sometimes when I was handing over mail that had gotten a little wet from the rain and people complained about their mail being wet, I wanted to scream at them: can you take a look at me, please? I am completely soaked myself! But that would have been rude. It might not seem this way, but delivering mail is a physically hard, demanding job. Never forget that.

I really appreciated people who offered me a hot cup of coffee/tea in the winter to warm up or some ice-cold water in the summer as a refreshment. Those acts of kindness went a long way (and it subsequently made me treat the mail carrier that delivers at my house with much more appreciation and kindness in return).

Unless you’re German, did you know that mail was delivered (mostly) by bike over there? Did this piece of information take you by surprise?