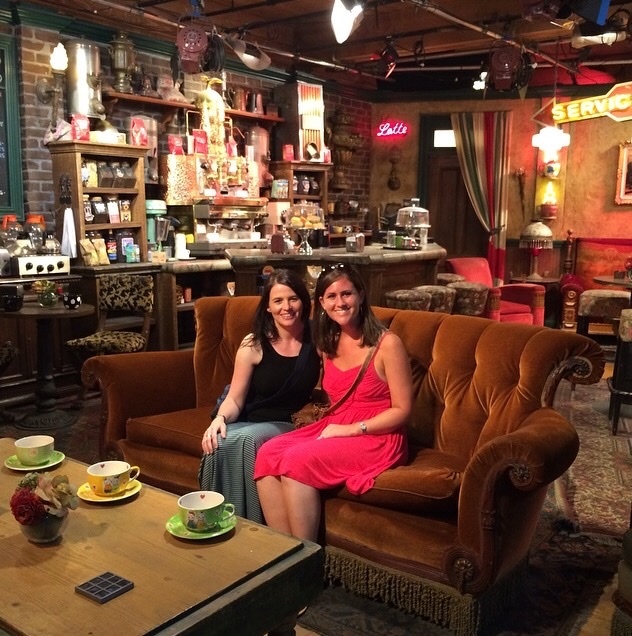 It’s been 25 years (WHAT?) since the first episode of F·R·I·E·N·D·S premiered on television.

I have to admit, I never watched the show when it first aired. Which is probably a good thing, as it would have been a horribly dubbed German version of it and it would have been awful. I’d say, I was almost a decade late to F·R·I·E·N·D·S and started watching it when the show had officially ended, but since I am a self-proclaimed 90’s girl, I could still relate to the show so much.

I know many people argue that the series hasn’t aged well and I would agree to some extent, but I am also not a fan of picking everything apart that was done 25 years ago. I still find the show laugh-out-loud hilarious (ask J, shaking his head, when he finds me giggling on the couch) and it lifts me up like no other show.

I even got to sit on the famous Central Perk couch at the Warner Brothers Tour a few years ago. (Hi Caryn!).

In honor of 25 years of F·R·I·E·N·D·S, I thought I’d share ten of my favorite quotes from the series.

But they don’t know that we know they know we know! – Phoebe (when the secret about Chandler’s and Monica’s relationship gets out, Season 5)

“You’re over me? When were you… under me?” – Ross (when he finds out that Rachel has feelings for him, Season 2)

“Isn’t that just kick-you-in-the-crotch, spit-on-your-neck fantastic?” – Rachel (when she finds out that Ross returned from China with a new girlfriend, Season 2)

“I am not great at the advice. Can I interest you in a sarcastic comment?” – Chandler (when Rachel asks him for friendship advice regarding Joey, Season 8)

“Oh I am sorry, did my back hurt your knife?” – Rachel (when she feels betrayed by Monica, who went shopping with Ross’ new girlfriend, Season 2)

“Over the line? You’re so far past the line that you can’t even see the line! The line is a dot to you!” – Joey (when Chandler kisses Joey’s colleague, who he has a crush on, Season 4)

“I think the most romantic song is the one that Elton John wrote for that guy from ‘Who’s the Boss?’… You know, ‘Hold me closer, Tony Danza.’ ” – Phoebe ( when she talks with Rachel about the most romantic love song,  Season 3)

“If you’re afraid to be in a real relationship, don’t be in one.” – Monica (teaching Chandler a lesson about commitment and relationships, Season 5)

Do you love Friends as much as I do? Wanna share some of your favorites?