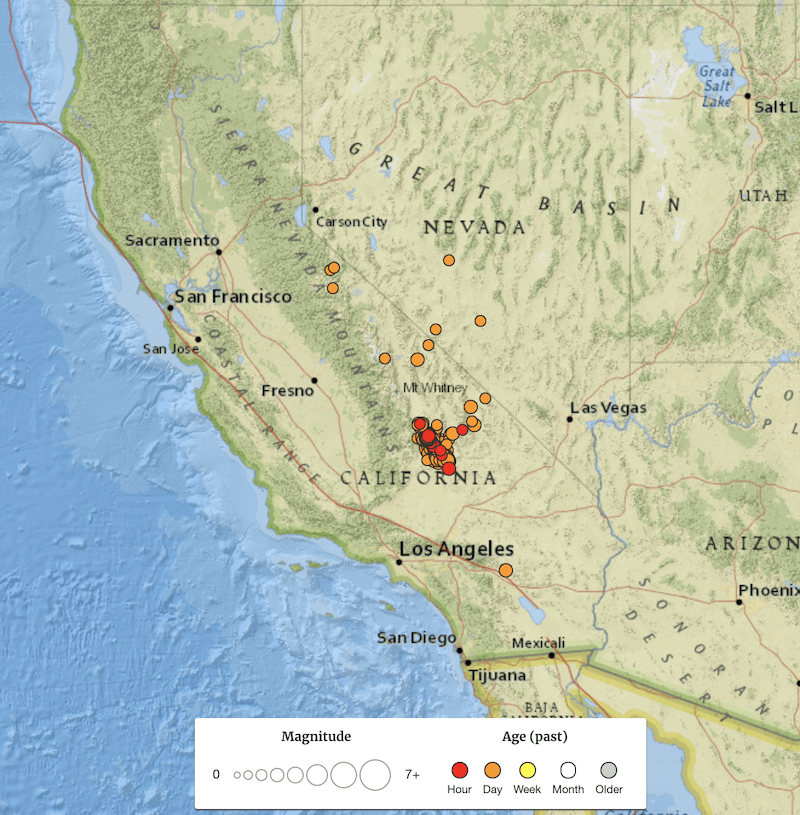 On Friday night, at 8:26 pm local time, California experienced its biggest earthquake in 20 years. M7.1 on the Richter Scale. The epicenter was in Ridgecrest in the Mojave Desert.

I was sitting on my couch on Friday night watching TV when I heard some creaking noises. Sometimes, the wood of our door makes noises when the AC is on and, as I imagine, the cold air inside and the hot air outside cause the wood to expand. Usually it’s just like one or two creaking noises.

However, the creaking went on for a few seconds and while I took notice, I didn’t think much of it.

Not until, my MIL and my friend Tanja almost simultaneously text messaged me about a big earthquake down in SoCal and until I checked the Internet to confirm that other people here in Sacramento had “felt” or “heard” something around the time the quake happened (like swaying lamps or sloshing of their pool water). It’s kind of bizarre to think that we can feel anything 300 miles north of the epicenter, but seismic waves travel. Sometimes, far.

Did you know that you can report if you felt an earthquake?

The USGS puts out an interesting map about the far-reaching effects of every single earthquake. Of course, I encouraged everyone to fill out the form! I did, too, although I only had little to report. 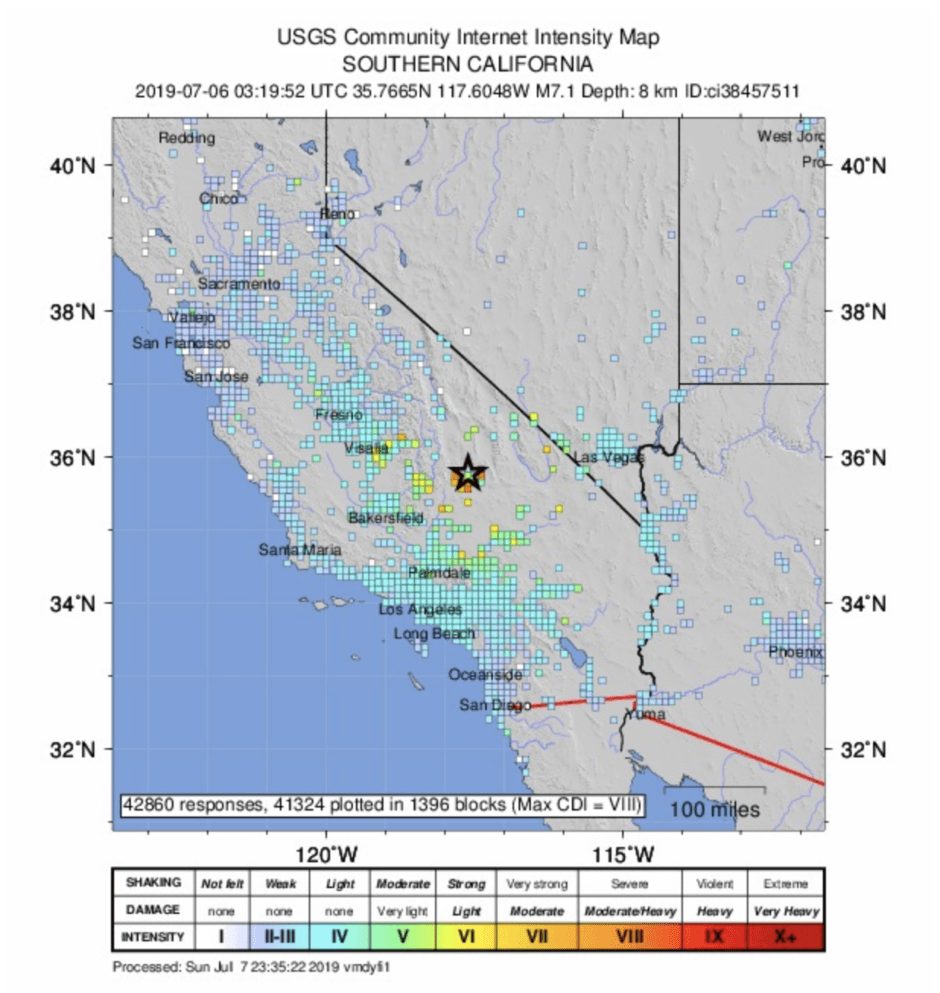 Tanja’s response was that I am the only person she knows that gets excited about earthquakes (and I guess, it’s true).

Earthquakes have strangely fascinated me since my first geography class in 5th grade and I went on to study geography in college. By a streak of luck, and I say that with a lingering pang of regret that I didn’t get to go to New England for my exchange semester, I landed right in the heart of “earthquake country” California.

Not surprisingly, I ended up writing my Master thesis about the San Andreas Fault System. While I didn’t end up working in seismology, I am still super-interested in the field and have had opportunities to work on earthquake-related projects.

People always ask me what it’s like to live with the fear of an earthquake happening where I live. First I would like to say that earthquakes don’t happen that often. Oh wait, let me rephrase that. They do happen on a daily basis, and on average there are more than 10 earthquakes every day, but they usually are too small for people to even feel them and are only detected by seismographs. I have only experienced a handful of earthquakes in my life, two of which – and you will find that funny – happened in Germany, and they were not particularly scary. The short rattling of some furniture, nothing more.

Sacramento is not necessarily a hotspot for earthquake activity, but we have had – and felt the effects of – earthquakes as close as the M6.0 Napa, CA (2014) and M5.7 Hawthorne, NV (2016) earthquakes. So, even though earthquakes can be felt where I live, the big fault systems of California are further away toward the coast and I am in the lucky position of being a “close observer”, but at the same time taking comfort in the safety of my geographical distance to more likely epicenters.

Do people think about the fact that an earthquake could happen? I don’t. Definitely not on a daily basis. I am aware of the possibility, but my first gnawing thought in the morning is not if it could happen today [it’s more like wondering when I get my first cup of coffee].

Here’s a handy 7 step-list on how to  prepare, survive, and recover:

I highly encourage you, even if you don’t live in earthquake country, to read through this list and create a preparedness plan. Not all of it will apply if you don’t experience an earthquake, but many of these suggestions are good advice for any sort of emergency situation you might find yourself  in.

Have you experienced an earthquake? Do you have an emergency kit at home?