I always thought I had a pretty ordinary name. It’s not that I dislike it per se, but “Sandra” was a very common first name in the seventies and with a somewhat “ordinary”, typical GermanÂ last name, I wasn’t particularly happy with it.

There was another girl with theÂ same name at my highschool [how many people actually KNOW a person with the same name? Besides my Dad and my Granddad, who have the exact same name, too] and I found it annoying to be confused with her.

I used to be an active member of the student body pretty much all throughout middle school and highschool, but when there were announcements at the bulletin board, I repreatedly found my name with the wrong grade association – so it always looked like that other person with myÂ name was doing all the work, when, in fact, I did! That kind of pissed me off!

When I came to the US, I was somewhat relieved when I realized that “Sandra” is a lot less common of a name here and people are actually sometimes pleasantly surprised to hear it, because it’s kind of rare. The only few times I encountered another “Sandra” wereÂ either Mexican girls or older women. It seems like this name was more popular over here in the generation of my parents.

With the rarity of my name here came also a high level of inventiveness and speculationÂ on what my actual name is. Numerous people to whom I introduced myself as “Sandra” kept calling me “Sandy” [which I am not a great fan of]. Other people would just simply assume that my name is “Sondra” or “Zandra”.

The most interesting name variation though did I hear todayÂ when I went out to lunch with my co-workers. Someone actually put down my name as “Sandera”.

I mean, seriously, how hard can it be? 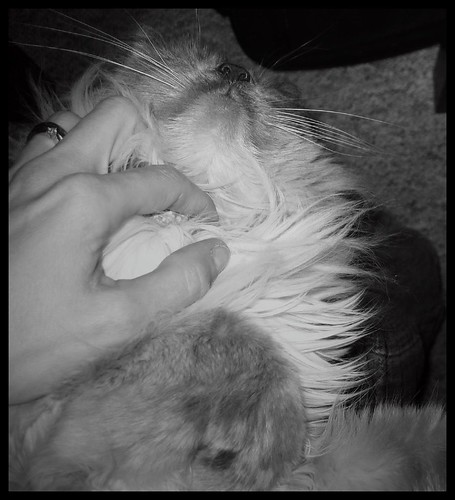 A big plus when moving in with my fabulous roomate was the fact that she had cats :)
I love cats. My sister and I were never allowed to have pets when were little. Except for two budgies that one of our great-aunts gave us for our 6th birthday, no pet has ever lived in our house. And the budgies didn’t last long either. One of them -mine! – died a mysterious death and the other one had magically disappeared when we returned home from one of our skiing vacations. Although the birds hadn’t been petable pets, my sister and I were devastated.

We found out years later that my Mom had secretly gotten rid off the second bird after the first one had died, because frankly, she couldn’t stand pets in our house. Considering that BOTH my parents had more than one pet when they grew up, I always found it cruel that we were deprived of that joy in our otherwise spotless and really happy childhood.

Even though I always wanted a pet, I probably didn’t want it bad enough, because I am pretty sure I could have otherwise convinced someone [most likely my Dad :)] to get at least a guinea pig or something.

Guess what the first thing was that my sister did once she had settled into a home with her at-that-time-fiancÃ©? They got a cat – Emma :) She’s adorable and, by the way, probably the most spoiled cat you can find.

I still haven’t had a home that hasn’t felt temporary yet, therefore I didn’t get to do the same thing… but moving in with someone who HAS cats was definitely the closest I could get to having a pet.

For the next two weeks, my roommate will be on vacation and I’ll be cat-sitting, so I’ll get to see what it’s like to actually be responsible for them. Let’s find out if I would make a good “momma”. ;)

I was asked by one of my fairly new readers, how I started blogging and I think it’s a great way to introduce myself to other new readers that might happen to come across my blog through NaBloPoMo.

I am aware that people start blogging for the most random reasons. I also know that some people find it strange to write so openly about one’s personal life on the Internet. For me, it all started when I began my internship with the U.S. Geological Survey in CA in January of 2004. I had been reading other people’s blogs on the Internet for quite a few months at that point and enjoyed the opportunity to share their daily lives. It was then that I decided that it would be a wonderful way to start my own blog in order to stay in touch with family and friends while I was away from home.

Naturally this first blog was in German. I enjoyed the fact that I could share my experiences abroad with my family and friends without repeating myself over and over again in personal emails. Those were reserved for -as the name suggests – more personal stuff.

It didn’t take long until I started a second blog – this one here – in English. I felt that I was excluding my international friends from sharing my life with me by exclusively writing in German. I also felt that moving on to a broader audience would be fun! I might not be the best of writers – especially because it’s not my native language – but I enjoy writing and getting feedback.
Now that I think about it, I find that blogging was bound to happen with me. I’ve been writing letters with people since 3rd grade and communicating in writing was -and still is- my preferred and the most personal form of communication that I can think of. A blog can’t replace real letters, but it’s a way to reach out to people.

Yeah, I think that’s it.