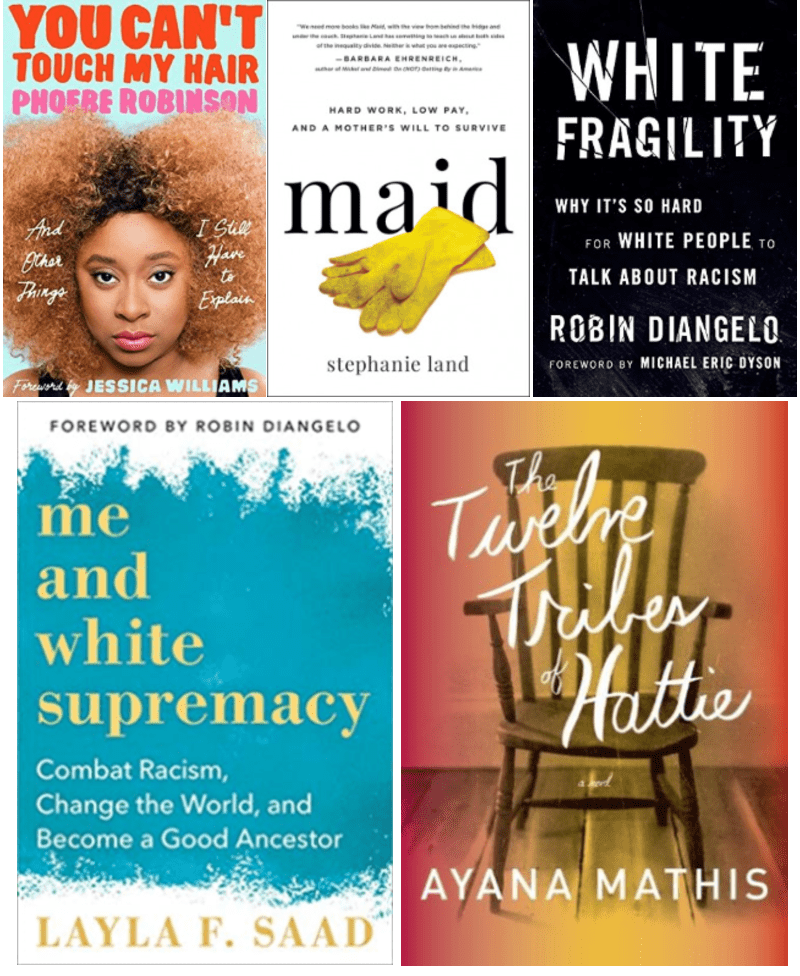 I finished 5 books in June (what?!). I think with everything that was going on, I felt like reading was the best course of “action” (as you can tell from some of the titles). So yeah, June was a good reading month. It probably helped that I was fired up and ready to learn some stuff.

You can’t touch my hair: and other things I still have to explain by Phoebe Robinson (★★★☆☆)

Let’s just say, ​I wouldn’t discourage you from reading the book, because Phoebe Robinson covers a wide range of relevant topics and I wouldn’t want you to miss out on her personal voice. However, the overuse of forced jokes, #hashtags and slang like “LOL.com, LOL.net, LOL.edu” or “nope.tumblr.com” in every other sentence (okay, she’s a comedian, but come on!), pop-culture references, and the need to rank the members of U2 in the order of whom she’d like to sleep with, seriously made my eyes roll back into my head at times. It started out as kinda funny but got „annoying AF“ (as she would say) real fast.

This could have been an interesting and informative book of its times, as she hit a lot of relevant matters about the black (and female) experience, but the writing style and some really superfluous stuff  (IMHO) mixed in, took away from it. For me, it’s not a good sign that at the end of the book, I can’t remember the important parts, because I was so annoyed with the writing style. Sometimes, less is more. I also couldn’t really figure out what the takeaway was supposed to be. Was it a plug for herself as a comedian, or a true testament to the black experience?

I think I’d like to check out an audio version of this book (I imagine it to be much better, as IMHO the gazillion jokes didn’t really translate to paper very well). 3.5 stars.

This book had some really mixed reviews, but it had been on my to-read list for a while and I must say that I thought it was a powerful book about the struggles of being poor in America. Land’s story illuminates the struggles of poverty, the frustrations of being a single mother with no safety net, and no one to turn to, and the indignity of government programs that are meant to support, but aim to micromanage and humiliate people that are in need of assistance. Getting ahead in this situation is nearly impossible.

There are a few “missing pieces” that would have helped to understand her situation a little better. What did she do between high school and getting pregnant at 28 (when she planned to go to college, but couldn’t because she had an unplanned pregnancy)? Why where family and friends mostly absent (or not willing or able to help)? All in all, though, I thought her story was compelling and well-written. I was rooting for her and Mia. Yes, she made some bad – and, from the perspective of an outsider, irrational – decisions, but it makes her story all the more human IMHO.

Me and White Supremacy: Combat Racism, Change the World, and Become a Good Ancestor by Layla F. Saad (★★★★☆)

This book originated from a daily Instagram challenge and is therefore structured as a 28-day program with journaling prompts at the end of each chapter. It’s meant to be an exercise in self-reflection and I definitely thought a lot about the questions that were posed at the end of each chapter (although I must add that sometimes I didn’t really know how to “answer” them, as I didn’t grow up in the US and cultural tensions in Germany exist but are somewhat different from the focus of this book.) I also instantly felt the urge to talk about the prompts with someone. I guess this is where the conversations with family members and friends come in that we’re supposed to have. I definitely will admit that a lot of our biases are subconscious and requires awareness and active reflection to become aware of and change them.

White Fragility: Why It’s So Hard for White People to Talk About Racism by Robin DiAngelo (★★★★☆)

At first, I was a little hesitant to read a book written by a white person that is meant to help white people acknowledge their fragility and biases regarding racist beliefs,  but I think there was a lot of good information here and I guess that sometimes it’s “easier” to hear it from a fellow white person? I don’t know. It seems counterintuitive, but maybe seeing someone actively “do the work” makes it seem possible for the rest of us. I appreciated some of the examples she gave and her admission of “being a work in progress” and how she handled situations where she messed up and apologized.

Is this the only book one should read about racism? Hell no, but it’s a good starting point.

The Twelve Tribes of Hattie by Ayana Mathis (★★★★☆)

This is the heartbreaking story of Hattie, who at 15 left the South during the Great Migration, to settle with her husband in Philadelphia. We get to know Hattie through the eyes of her many children, each introduced in a separate chapter, and the story spans many decades. I absolutely loved Mathis’s powerful writing style and definitely was engaged in this family’s story, which was so powerful and moving, but also sometimes unsatisfying, offering little resolution to any of the individual stories it told. If anything, I would have liked for the book to be longer and the chapters to be more interconnected. Still, I’d definitely recommend you read it.

What did you read in June? Anything you’d like to recommend? Leave a comment, and then add me on Goodreads to keep in touch.