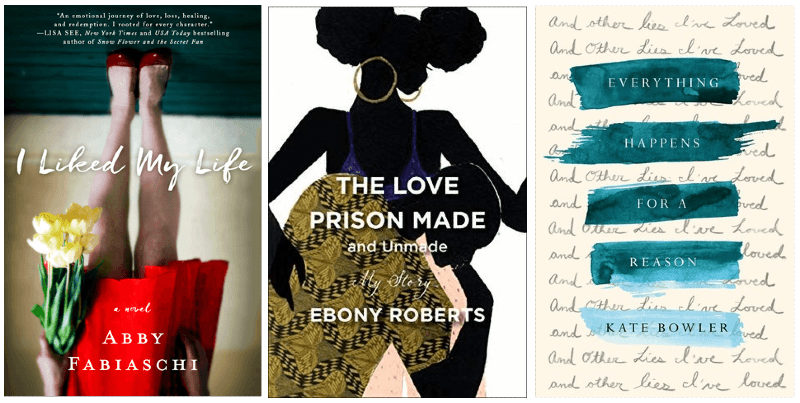 I read three books in January, which is a good start into 2020.

This book had a lot of 4 and 5 star reviews and I’ll admit that it had some good moments and a few bits of real wisdom scattered along the way, but overall I wasn’t a big fan. First clue: the book didn’t engage me, I had to keep pushing to pick it up. For me, that’s not a good sign.
The plot was intriguing enough: Maddy has apparently killed herself and is now looking on from the afterlife and is trying to meddle with her husband’s and daughter’s coming to terms with her death and moving forward without her.
The book is written from different perspectives with alternating chapters narrated by Maddy, Brady (her husband), and Eve (her daughter). While this setup works sometimes, I generally don’t love this writing style much. There were also a couple too many side plots going on that didn’t really contribute to the main story, IMHO.

Oh yeah, and I didn’t care for the ending. It felt a bit too forced to me, but I leave this for you to decide.

The love prison made and unmade: my story by Ebony Roberts (★★★★★)

This book was heart-breaking, but ultimately very realistic. Well, it’s a memoir, so realistic or not, it’s someone’s real story. This is so much more than just a love story between two people, but a critical look at the justice system and its effects on prisoners and their loved ones. Growing up with an abusive father, Roberts vows to not make the same mistakes that her parents made. As a strong-willed and educated woman, she works to improve prison conditions and then falls in love with an incarcerated man, despite her better judgment. Her story shows that intellect doesn’t always win over the heart and that love and hope can make you throw all caution out the window.

While the title gives away how her story ends, it was a special treat to follow Roberts’ journey. I have felt a lot of sympathy for her situation and the hope and steadfast belief that she felt throughout the telling of her story.

Everything happens for a reason: and other lies I loved by Kate Bowler (★★★☆☆)

This book was intriguing because the title really spoke to me. People throw around that “everything happens for a reason” so often and nonchalantly in a failed attempt to offer comfort, but I am a pretty strong proponent that actually ‘nothing’ in life really happens for any reason.
The book was religion/faith-heavy, as Bowler, a history professor at Duke Divinity school, grapples with a devastating health diagnosis. She’s the author of a book about the history of the ‘prosperity gospel’,  the controversial religious belief among some Protestant Christians that financial and personal blessings are always the will of God, and she discusses her diagnosis against the backdrop of these religious beliefs.

I guess I was hoping for a little more of a concise message; her writing meanders a bit, but  I liked that she used some dark humor and funny anecdotes to lighten the mood and she shared good tips on how to support someone with terminal illness.

What did you read in January? Anything you’d like to recommend? Leave a comment, and then add me on Goodreads to keep in touch.