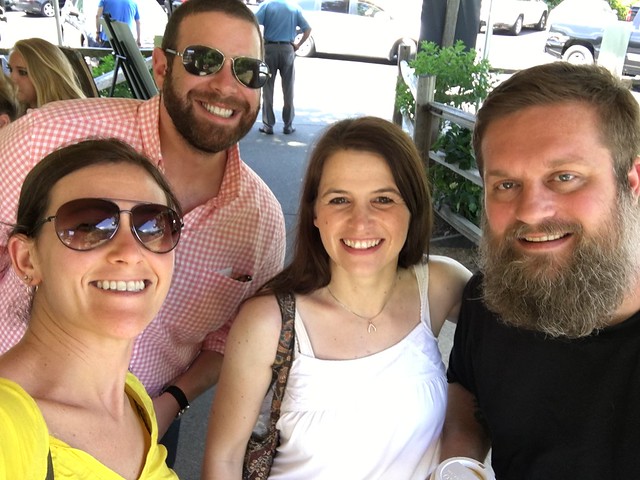 One thing I love about my job is that I am allowed to work a flex schedule  (four 10-hour days and three-day weekends, booyah!) and that this also affords me the option to shift my day off around with my supervisor’s permission.

So, a couple of weeks ago, I shifted my day-off to Wednesday (and worked Friday instead) to be able to take advantage and see some dear East Coast friends that were traveling in California for the week.

They were staying in the Sonoma/Napa Valley area on Tuesday and Wednesday and since this about an hour’s drive from here, we decided to meet up with them for the day.

Caryn and I have known each other since the old blogging days and met in person for the first time when we both attended BiSC in Vegas in 2013.

We saw each other a few times after that, once when she came to California to meet up with me in Los Angeles for the weekend, one more time when she came with her then-boyfriend Joe to hang out for a few days in SoCal while they were traveling, and a third time when I flew to D.C. last year to attend their wedding.

J hadn’t met either of them yet, but I knew that he would instantly connect with both of them. They’re just awesome, easy-going and funny people.

So we headed out to Napa instead of work on a Wednesday morning to meet them at one of the gazillion wineries. They had arrived via Uber from their hotel, so we were able to pick them up and conveniently spend the day driving around with just one car.

We headed to Dean and DeLuca in St. Helena to get some sandwiches first. Unfortunately, I was quite disappointed when we got to the store, because the previously vibrant, packed retail space appeared downsized and empty. (I googled it later and it seems like the company is struggling and downsizing. I had no idea. It would be a shame if they closed this store, too.) 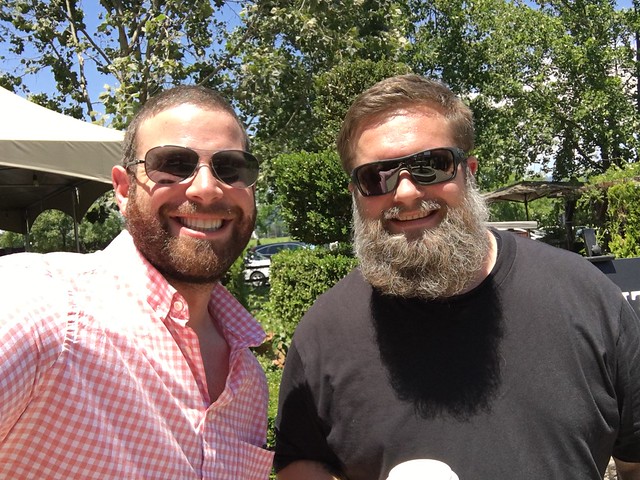 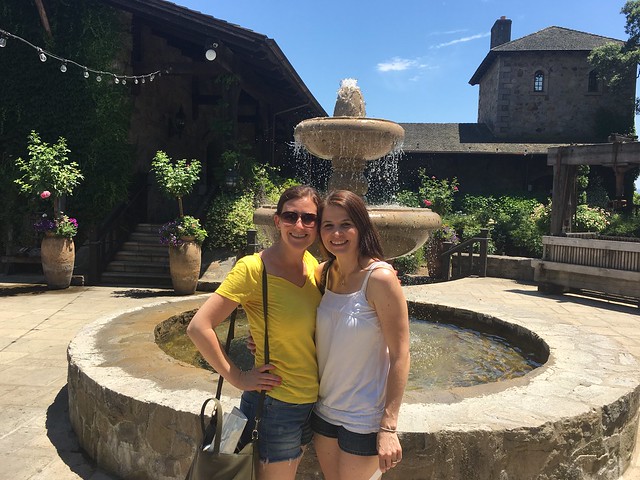 After acquiring lunch, we headed over to V. Sattui Winery for our first wine tasting. 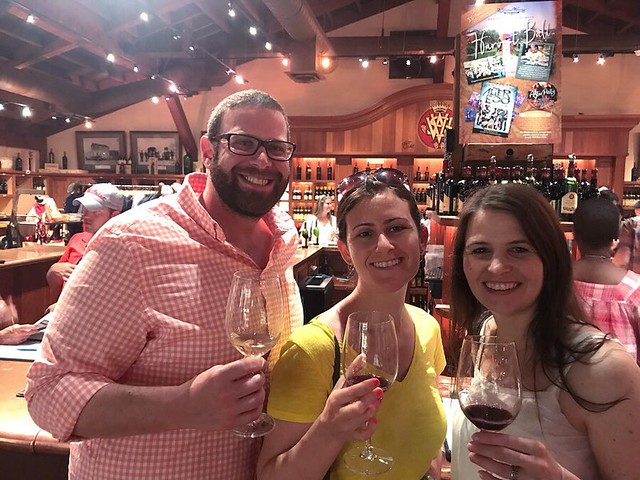 Afterwards, we visited the Castello di Amorosa Winery further north. I had never been there and I am glad we got to see it. This medieval inspired Tuscan castle is beautiful.

I was a little peeved when we found out that they charged $30 admission fee for J, who wasn’t drinking, but then claimed that they had to charge the admission because ‘the wine was FREE’. Yeah, right. Not a good business strategy in my book to charge someone 30 bucks to watch other people drink, but hey, I guess they don’t care about people who drive themselves to wine tasting. (Where are the big bus touring groups?) 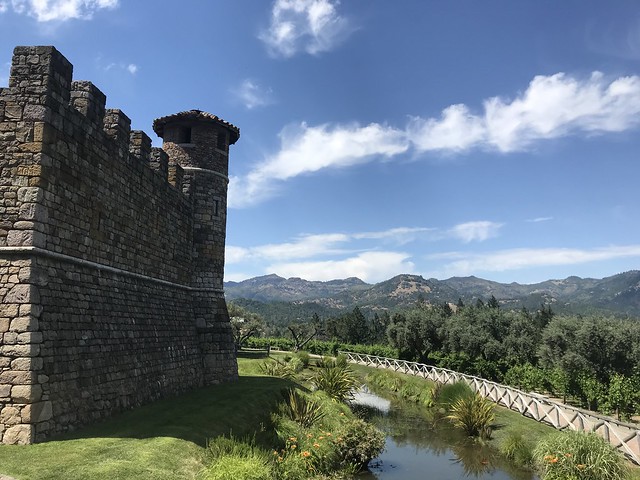 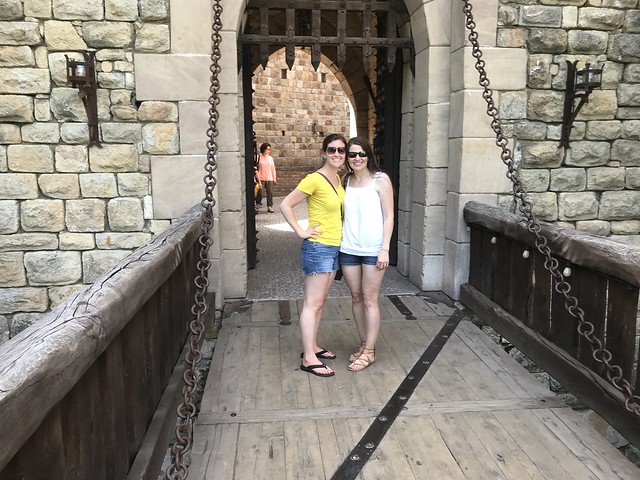 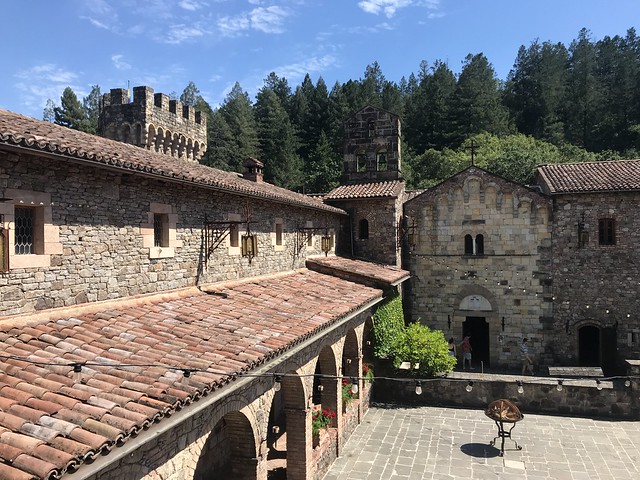 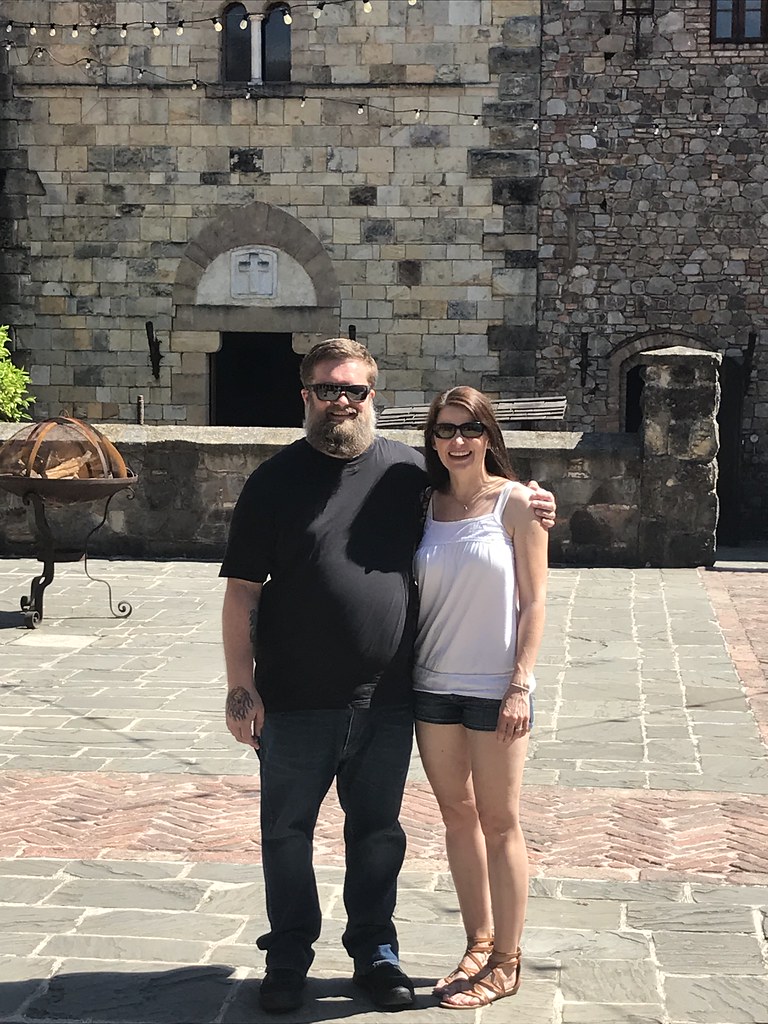 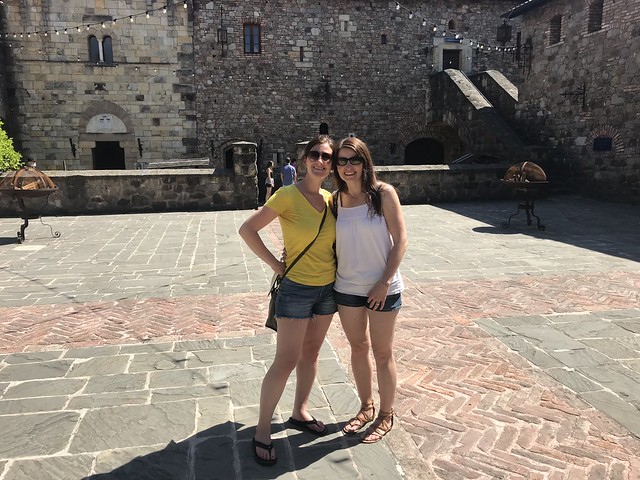 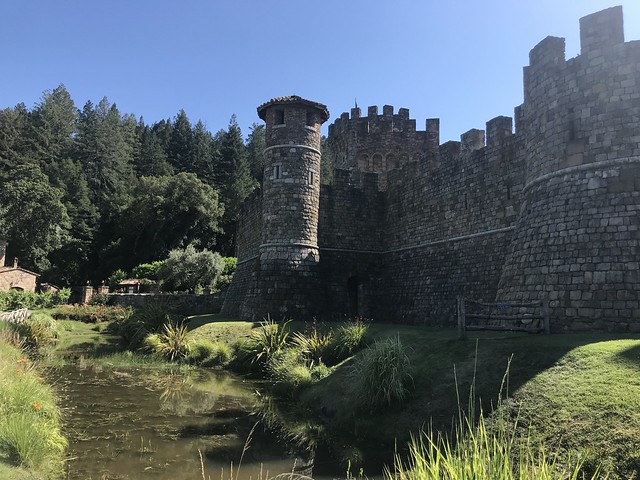 We did pay it and we did have a nice experience overall. The castle is amazing and the wine tasting (including chocolate) was amazing, but the admission charge left a bit of a bad taste in my mouth.

We made it to one more winery, Napa Cellars, after that to take advantage of their complimentary cheese board. Joe and Caryn came well prepared and had an app that told them which wineries had 2 for 1 wine tasting deals and/or other special perks.  We hung out there for a while, played some cornhole and then eventually left for (the city of) Napa. 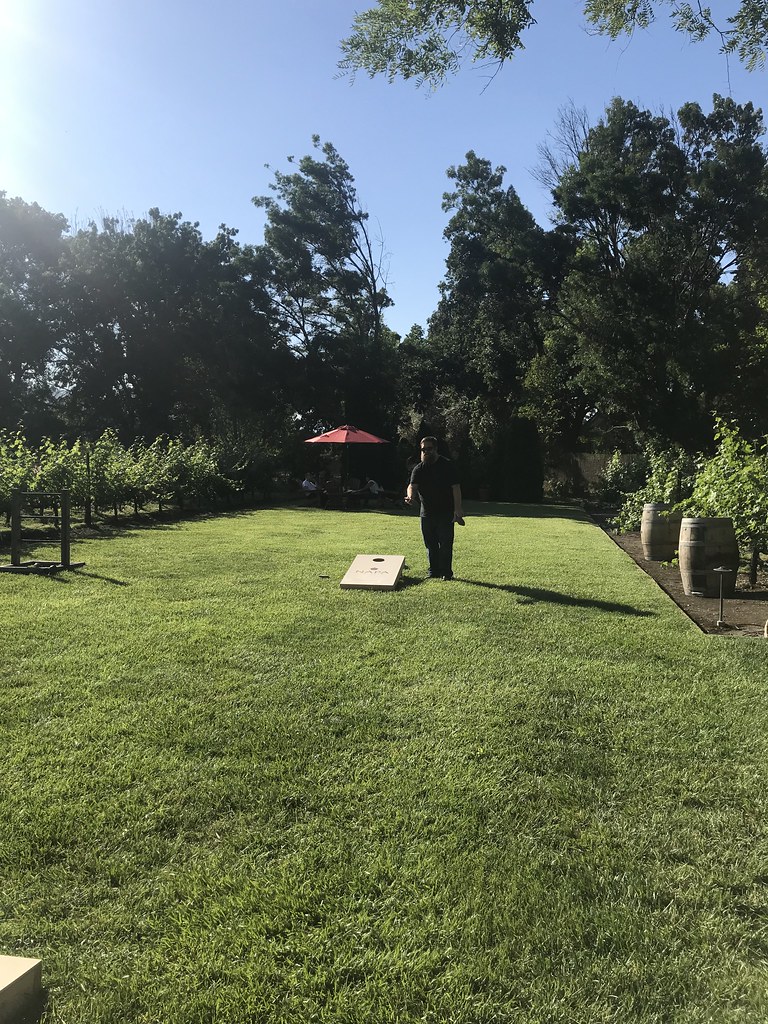 We took a nice walk along the newly updated Riverfront and then grabbed some dinner at “Stone Brewing Napa”. 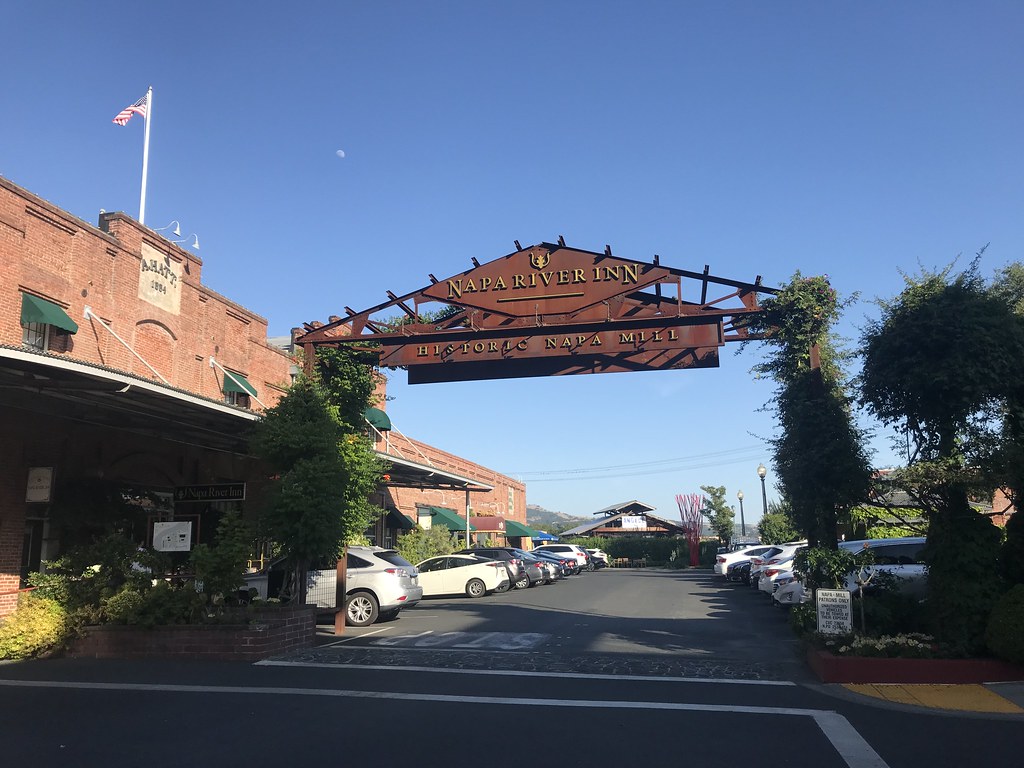 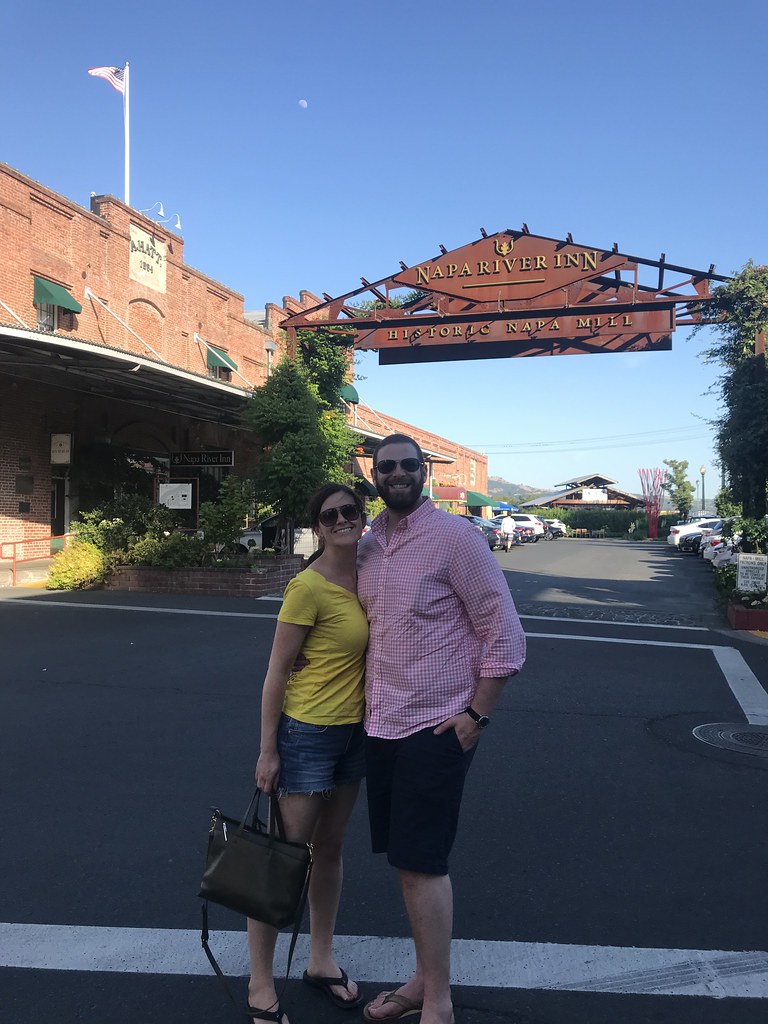 I tried to order a ‘Radler’ (beer with Sprite – very common in Germany, basically the same as a shandy) but they denied me. They said that they couldn’t ruin the experience of the beer by mixing it with a soda. So,  I ordered a beer and soda separately and told him I would “ruin my experience myself then”.

We had a delicious dinner and then took Caryn and Joe back to their hotel in Sonoma before heading back home.

I am so, so glad we made this day happen. #winebeatsworking

It was really great to see our friends again (and for J to finally meet them both!) and I hope we can get together somewhere, sometime soon again.