This week, I am linking up with Erika, Patty and Marcia  for Tuesdays on the Run again. The topic for the day is “racing mistakes” and I thought this was kind of fitting, because I was going to recap my last race for you, even though my “race mistake” (a botched training cycle) turned out not to be a mistake at all.

So, half marathon #3 is in the books and with that I completed (one of) my goals for this year.

The Urban Cow Half Marathon is a local race that I wanted to run for the last two years, but I hadn’t worked out in the past. In 2016, my parents were here for a visit and we were traveling over race weekend, so I couldn’t run it then. Last year, my cousin and his girlfriend were here and again, I was traveling with them over race weekend. This year, I made the pledge to not let anything get in the way… and then I almost was away on travel again over race weekend. But only ALMOST.

As you might recall,  I had back to back field trips the last few weeks and so running a half marathon right smack in the middle of it all wasn’t ideal (to say the least), but I wasn’t going to let my registration go to waste because of it either because a) I was signed up already and b) this was probably my only (if not easiest) opportunity to reach my goal to complete three half marathons this year.

My training had been thrown off quite a bit due to my travel and my last long run (11 miles a week beforehand) had felt sluggish and hard. So, I went into the race with zero expectations. I told myself to just treat it as a nice, easy Sunday run and see how I feel. If I go slow, I go slow. If I have to walk, I walk. I’d make it to the finish line eventually.

Well, there is something to be said about setting no expectations. I now call my derailed training cycle the “successful long taper”.

After I picked up my race bib, t-shirt and a commemorative glass (because I was one of the first 5000 registrants!) and a light warm up, I made it to the start line around 7:30 a.m. and looked for the 2:10 pacer. I figured that I could just hang with the pacer to keep a comfortable pace and not even pay attention to my watch. So far, so good.

I ran the first mile or so with the pacer but quickly realized that other people had the same idea and that she had gathered quite a group of runners around herself and I knew: I would not do well running among a tightly packed group of people.

Do you also get irritated by other runner’s heavy breathing and stomping? Maybe it’s just me, but it already bothered me and I knew that I would be much better off if I could find my comfortable pace a little bit away from other people, so I decided to speed up (temporarily) to find a less crowded spot among the runners.

And then I just ran by effort. I really just wanted to finish this race (and have fun doing it). 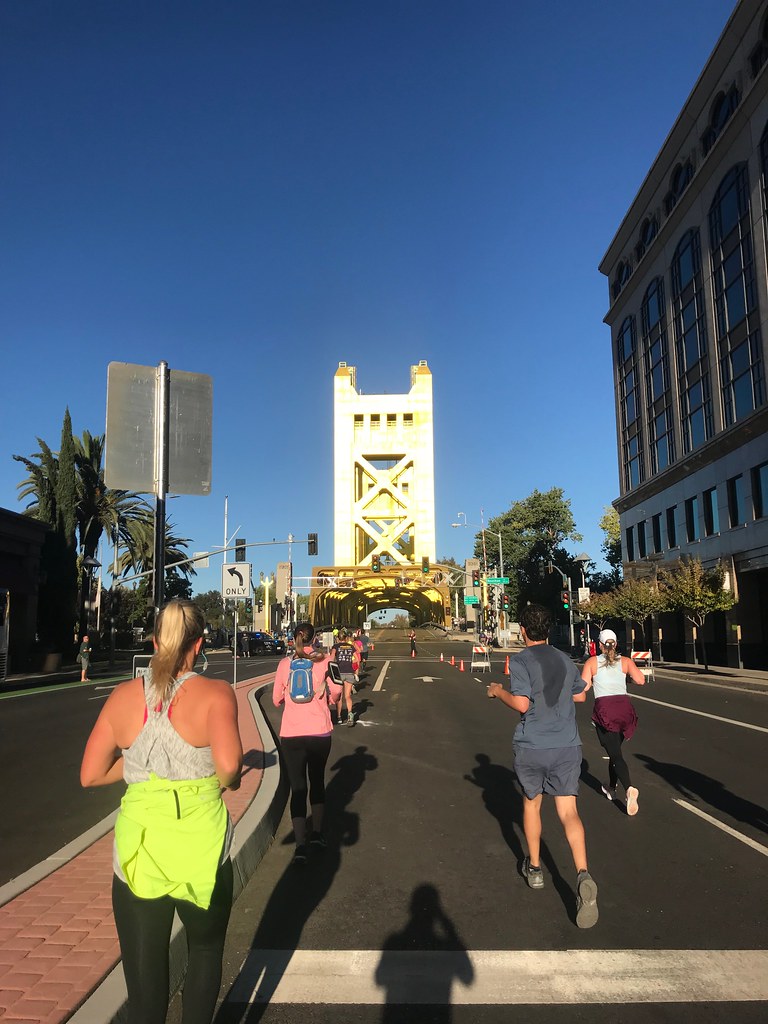 The course was very familiar; it went through the Land Park neighborhood, then we headed towards Downtown. We ran through a small part of Old Town. Then we caught a nice glimpse of the famous Tower Bridge, before turning left onto the Sacramento River Bike trail.

Here’s a race photo near the halfway mark of the race on the Sacramento River Bike Trail, which was also the relay exchange station for those doing the relay. 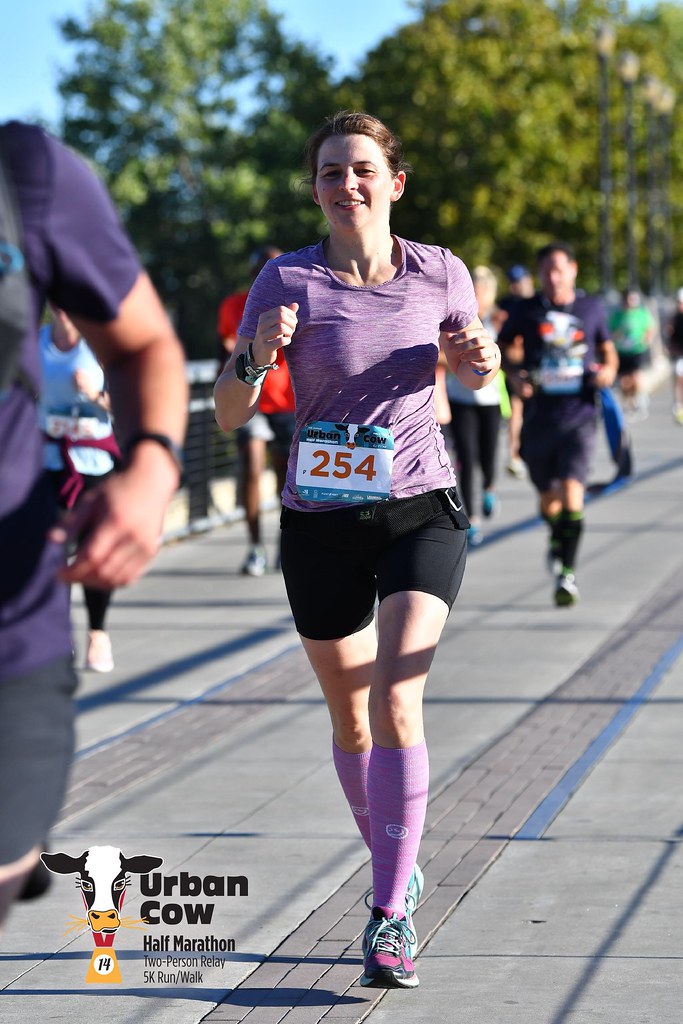 It was fun running on the trail with the railroad tracks on our left and the Sacramento River to our right. We ran a loop through Miller Park and then continued on the Sacramento Bike trail before heading back to William Land Park and to the finish line.

Astonishingly enough, I felt really good throughout the race and while I tried not to look at my Garmin at all (ha, I wish!), I was positively surprised to see that I was keeping a fairly fast pace (for my standards). I was even more surprised when I realized that I would be able to squeeze across the finish line with a new personal record. I could hardly believe it because as mentioned above, I had honestly not set any expectations  for this race. I just wanted to have fun and finish.

I guess sometimes it pays off to set yourself mentally free and just let your legs do their thing. 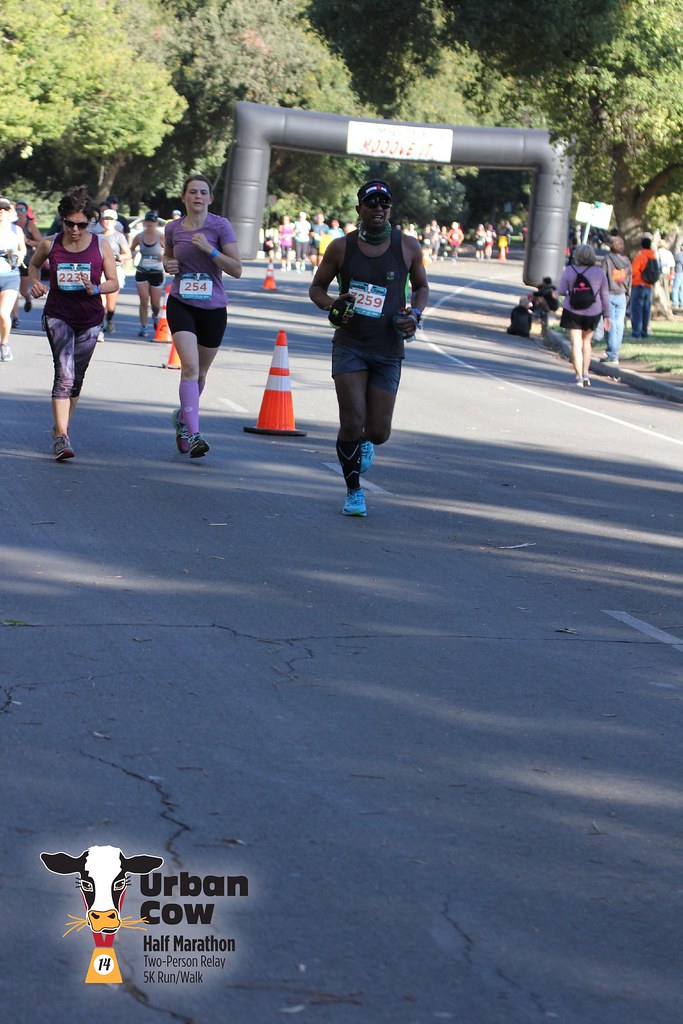 Still no sub-2 for me. I mean, I wasn’t even trying (but maybe I should have?). Either way, I am so over-the-moon happy with my new PR:

I was also very impressed by how closely my Garmin recorded my race time and distance. 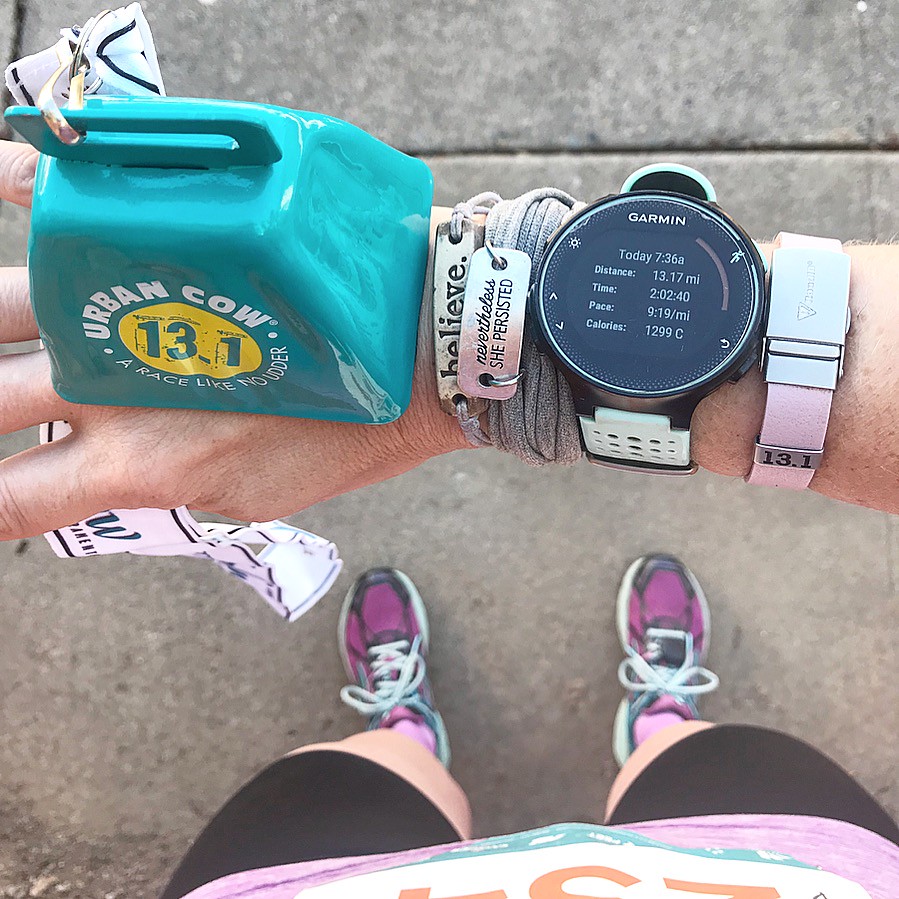 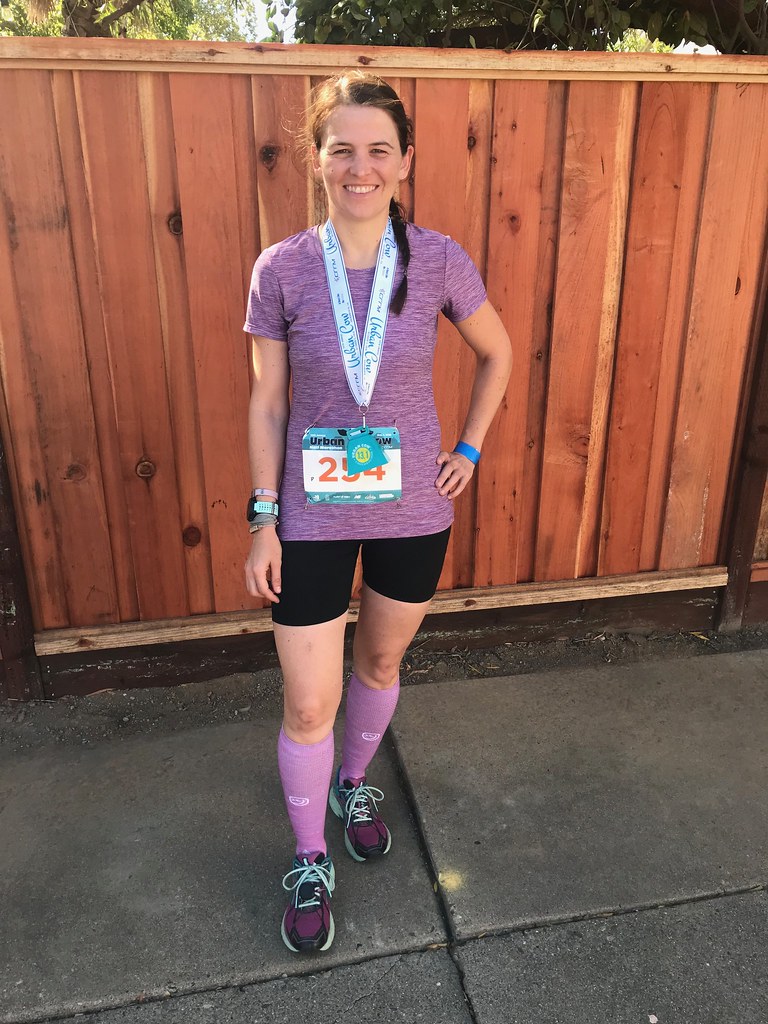 I was able to register online (with a discount) and I think you could also do a last minute signup on race day morning. I picked up my race packet in the morning on race day, which was very convenient for me (as I was traveling the days before).

The race course is mostly flat and you it’s a very nice running route through an old established neighborhood, through downtown, and along the river.  There were enough aid/water station and they were adequately staffed with volunteers that offered both Gatorade and water.

Right behind the finish line, you were able to pick up your medal. There were also free bottled water, half burritos, and strawberries with a chocolate chip cookie at the finish line for all finishers.

The race photographers did a great job getting pictures at multiple locations. The photos were available to look at online within 3-4 days and they were available for FREE! Big bonus points here!

This was a really fun, local race that I’d run again in a heartbeat. I basically just had to roll out of bed and walk over to the start line. It can’t get much better than that. The registration fee was appropriate ($65) for all the perks (great t-shirt, medal, souvenir glass, food and water, and free race photos) and the course was just fun to run – flat and (somewhat) scenic. There were lots of spectators along the way and motivational signs on the second half of the course to help us finish strong.

Do you run local races? Which one is your favorite?