Have you been to a wellness retreat before?

In all honesty, I used to go back and forth between really wanting to do it and thinking that it was definitely not for me.

My problem is: as an introvert, I was afraid that a weekend retreat would exhaust me (spoiler alert: it did. But in a good way.) When I told J that I had a lot of fun (and would do it again in a heartbeat), but that it was also challenging to be around so many people as an introvert, his response was: but you’re not an introvert.

I think it’s a big misconception that introverts are loners and don’t have friends. Because J instantly said: you have so many friends and people you keep up with, you’re not an introvert.

But, the fact that I keep up with a lot of people doesn’t make me an extrovert. In fact, I think part of the reason why I am a much better email/pen friend is that I am an introvert and often enjoy the written communication more than I would hanging out all the time.

That’s not to say that I don’t like hanging out with people. I do. Especially with people that I am close to and comfortable around.

I have no problem being around close friends and family for extended periods of time. I expend less energy around those people. However, when I am in a big group of people that I don’t or barely know, I quickly reach my limit for sustained human interaction.

Nonetheless, when Susi asked me if I wanted to join her at the Women’s Wellness Retreat, I didn’t think twice about it. I mean, the prospects were: spending a weekend with Susi (which I will always say ‘yes’ to), getting to meet some other German ladies (and being able to chat in German for a weekend, which is like a “vacation for my brain”), and participating in a variety of fun outdoor activities.

A weekend of relaxing, hiking, trying new things, beautiful views, and cooked meals. Who would say no to that? 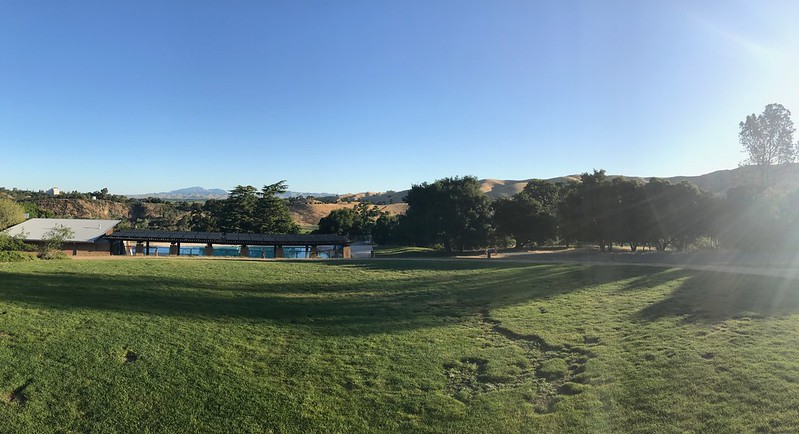 The Retreat was organized by YMCA East Bay at Camp Arroyo near Livermore, CA. 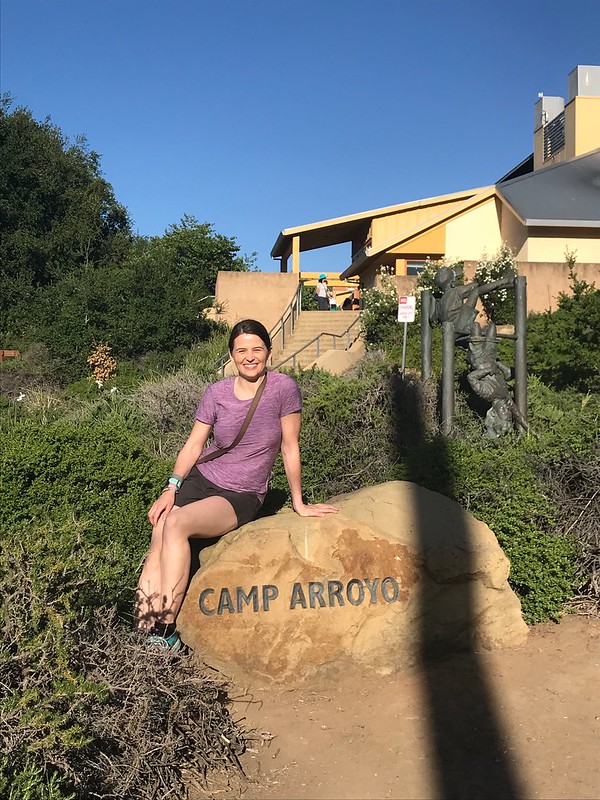 We arrived Friday at 4 pm and received our weekend agenda upon check-in. All listed classes & activities were included in the weekend fee and we could choose to enjoy as much or as little as we liked!

Of course, my mental approach was: I have paid for this and while I am here, I should take advantage of as many activities as possible and try something new. Four to six classes were offered per session and included Yoga, Pilates, HIIT, African Dance, Zumba, Water Exercise, Ballet, Water Zumba, Hikes, Nature Crafts, Rock Wall, ZipLine, High Ropes Course, etc.

After moving into our cabins (6 bunk beds, 10 ladies), we headed out for our first hike. 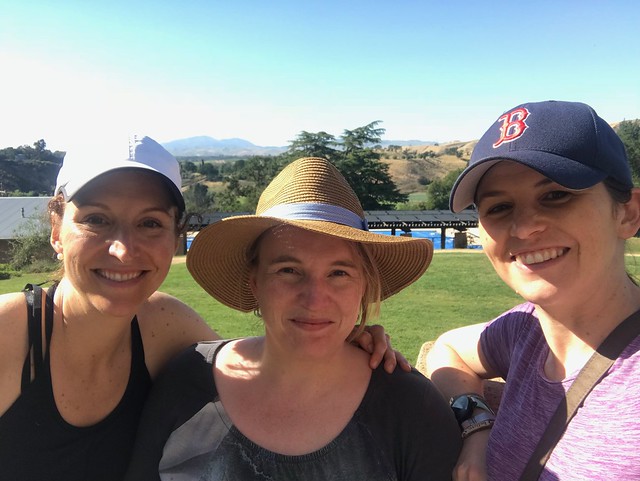 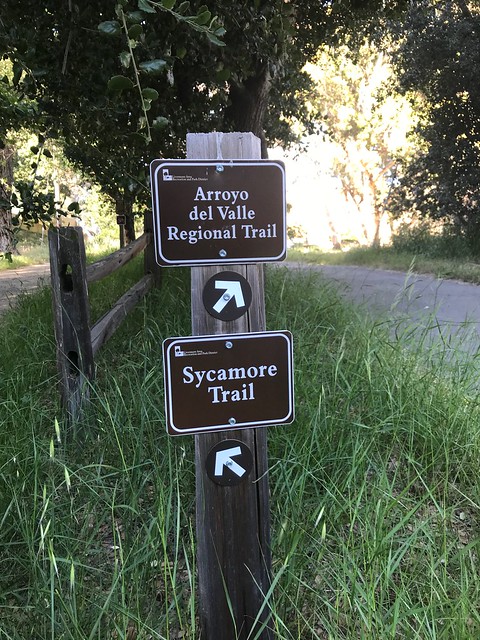 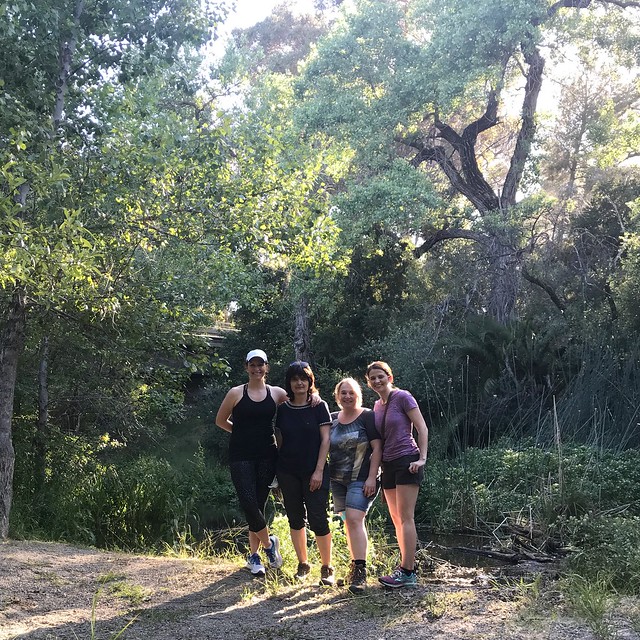 Dinner was served at 6 p.m. and the food was absolutely delicious. I mean, when you think of ‘camp’, you don’t expect to be served lobster rolls and first class mac & cheese. Yum.

There was an orientation and some ice-breaker games to get to know the other participants after dinner. Always a little awkward for introverts, but luckily there are always enough extrovert people who are happy to participate and speak up. We went to bed early on Friday night, because Saturday promised to be a busy, but fun-filled day.

We got up early to attend a 30-minute early-morning yoga session before breakfast. Oh, it was so wonderful to be back at it (hey, does that count as completing my goal of going back to yoga?)

We had breakfast at 8 a.m. and then the first session began at 9 a.m. I had originally planned to go on a big hike Saturday morning, but I also wanted to try out a HIIT class (my first, ever) and since it was only offered Saturday morning, I decided to do another hour of yoga and then attend the HIIT class at 10:30 am. 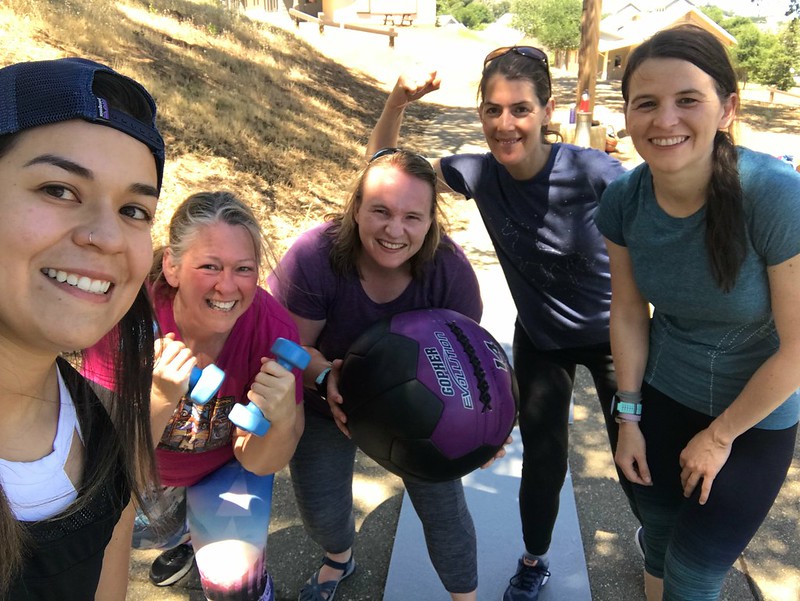 Loo, our instructor, was great and it was a lot of fun, but man, it definitely showed me that I need to do more cross training. I was so sore (esp. in my arms and shoulders).

In the afternoon, I had signed up for the High Ropes Course/ Zipline. That was the class that I signed up for to ‘challenge myself’, because I am a little scared of heights. You can’t really see it in the video, but getting over on the zipline platform was worse than the zipping itself. My legs were shaking when I was trying to make it over there to the platform. 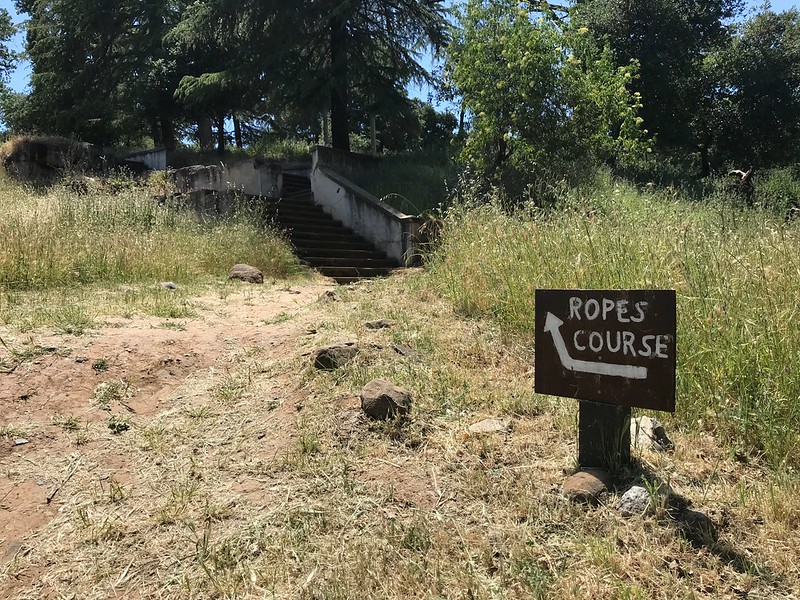 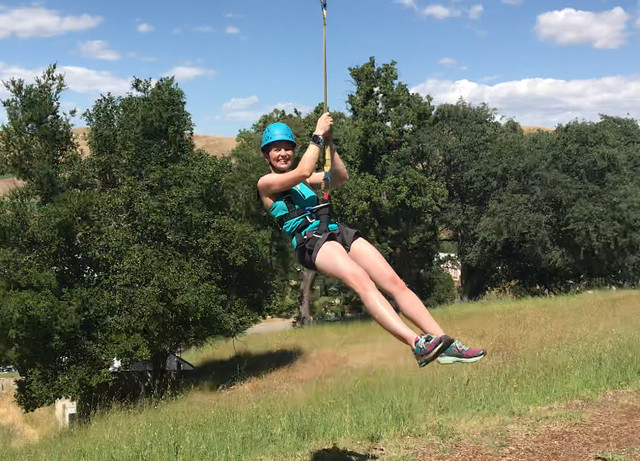 I am really glad I did it though.

The afternoon ended with a “nature weaving” class. The class instructor showed us how to craft with natural items (sticks, flowers, grasses, etc.) and to be honest, I was a bit uninspired. My preferred craft items are paper and yarn. No wonder I just ended up wrapping  a stick in self-striping yarn. 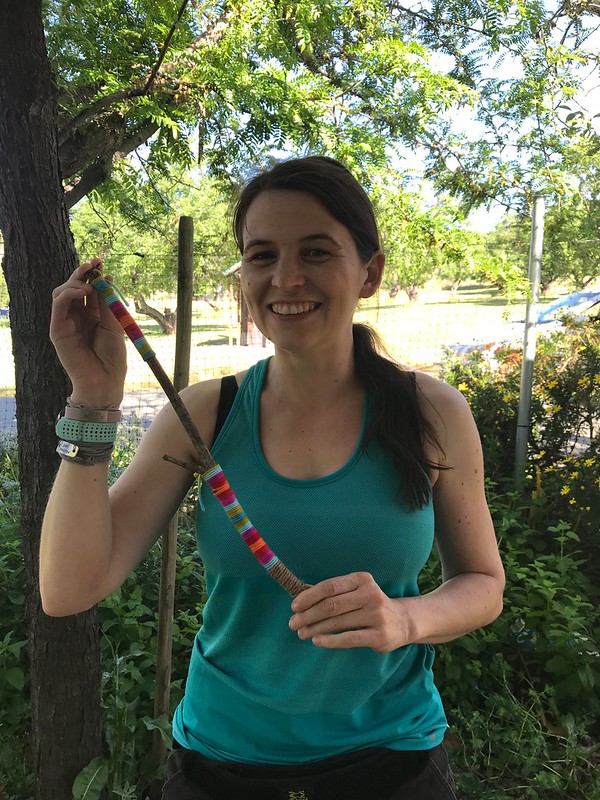 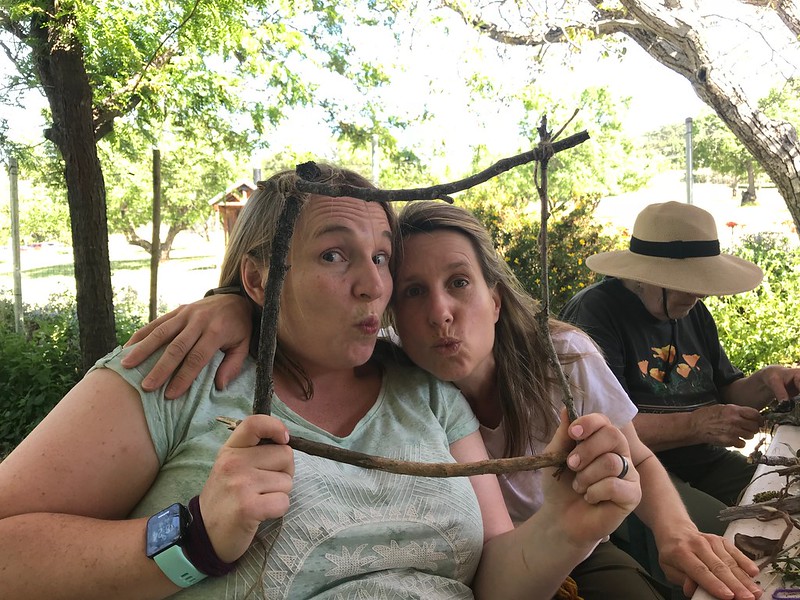 Susi and Jessica however did great with their natural frames :) 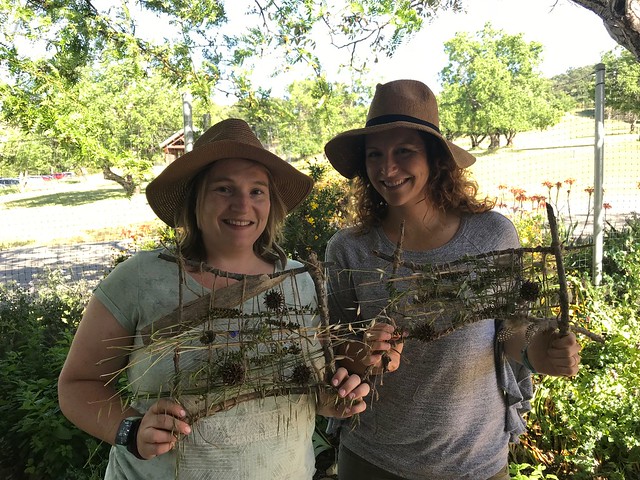 I had time to take a quick shower and hang out on the lawn for a bit of sunshine. Then we were served another exquisite dinner: Caprese chicken breast and Filet Mignons with mushrooms, grilled vegetables and mashed potatoes. Wow. 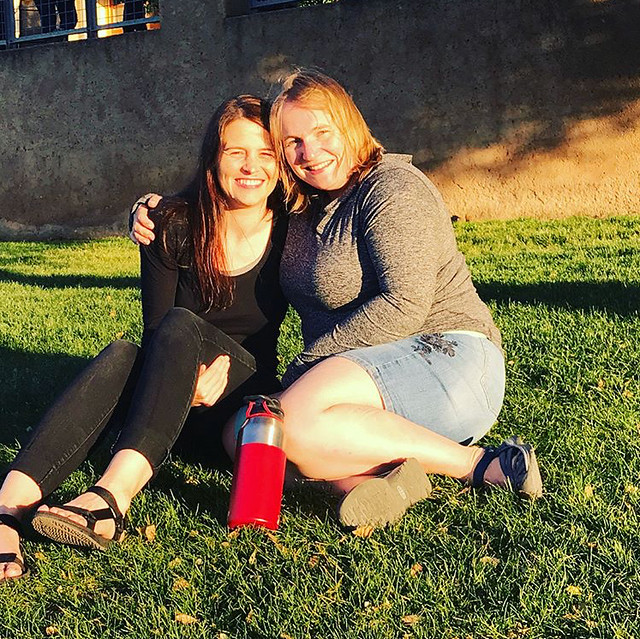 After dinner, it was time for “ shindizzle”. Basically a form of line-dancing and then free-form dancing for a couple of hours. That was fun. It made me realize, I hadn’t danced in a really long time. At 8:45 pm we went over to the amphitheater for a campfire and some people performed songs or skits.

The next morning, I was up at 6 am again. At first, I had wanted to go on the early morning hike at 7 am but then decided to just get some coffee and find a quiet place with my knitting. I hadn’t really had any downtime and decided to just enjoy the beautiful morning and to wrap up the weekend in peace and quiet. 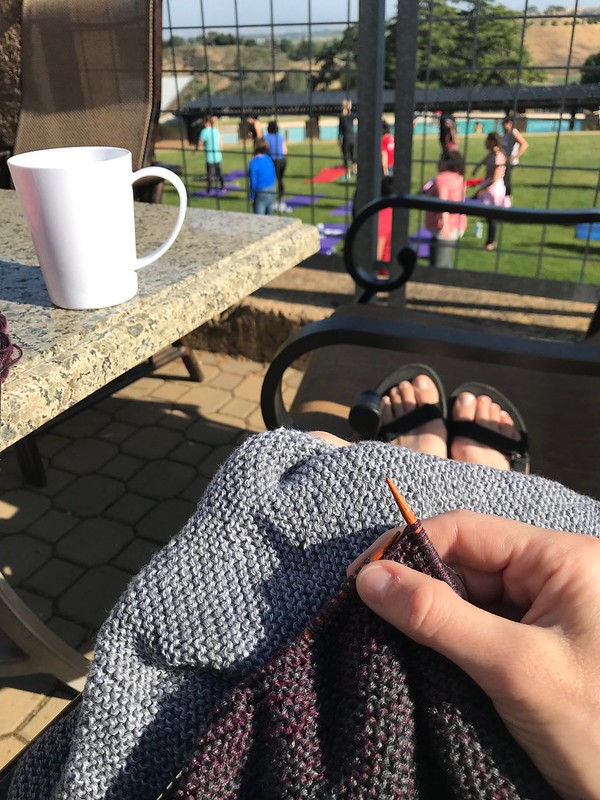 We packed our stuff and moved out of the cabins by 10:30 am and then attended a closing ceremony at the amphitheater. Many people got up to share feedback and their camp experiences. It got pretty emotional. 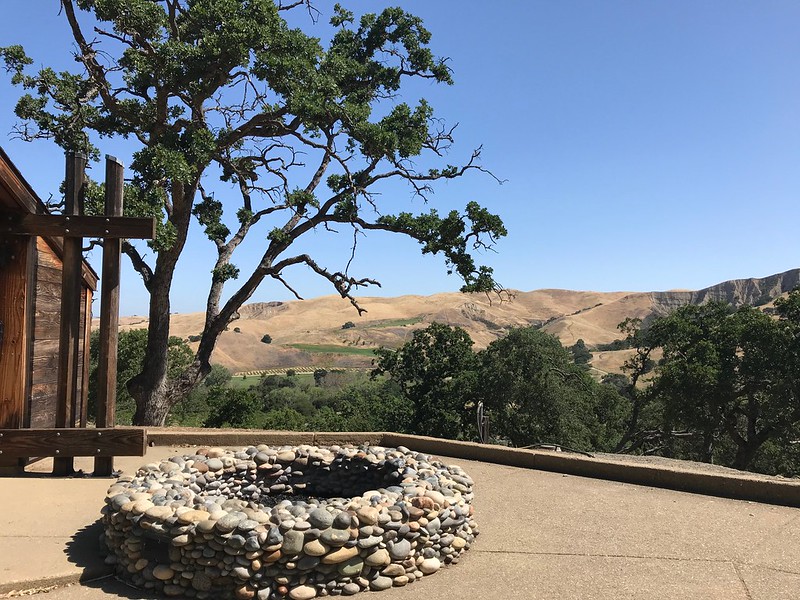 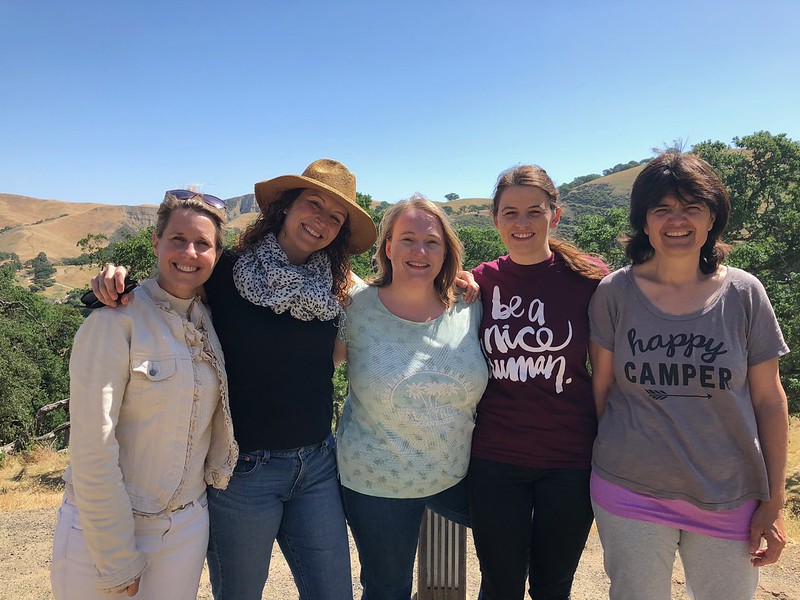 At 11:30 am we enjoyed a great Mother’s Day’s Brunch before heading back home.

To be completely honest: spending a weekend retreat with 90+ other women when you’re an introvert is… interesting, to say the least. It was barely a 48-hour event, but I could already feel the ‘overwhelm’ creeping in. However, being around a small group of German ladies was delightful. It’s been nice to chat in German and hear someone say “oh, I haven’t heard that phrase in such a long time” when you slip back into German colloquialisms.

We also made a conscious effort to “disconnect” from the digital world last weekend. Yes, I took a few pictures with my phone (because it’s the only camera I brought), but I basically stayed off the Internet and all social media platforms for 48 hours, which really was a nice break (that I should take more often).

Have you been to a retreat? How did you like it?