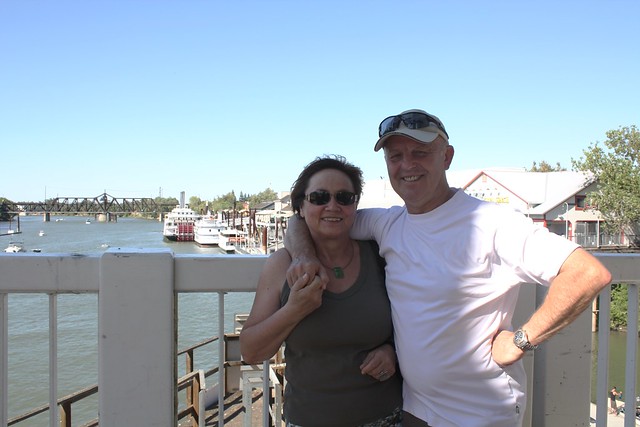 Ok, so I might be slightly biased, but I have to say that my Mom and Dad are pretty awesome people and I hate not being able to hang out with them on a regular basis.

This last week, they’ve been on a trip in the Mediterranean to celebrate their 40th wedding anniversary, and you guys, I am so over the moon excited. My sister and I pulled off a fantastic surprise for them. Originally, the idea had been for them to come visit us here in California and bring my sister and her family, too; have a big family celebration here with us.

Unfortunately, there were few events that prevented that plan from coming to fruition (my Dad was hospitalized earlier this year and is supposed to be having minor surgery this summer, my sister and BIL bought a house, yadda, yadda), but I am really glad my parents decided to still do something special for their anniversary, because holy cow…. 40 years of love and life together is amazing!

My sister and I racked our brains what we could do to surprise them with something special for this special anniversary and for sticking it out with each other for such an impressive amount of time. It’s hard to organize a surprise when you’re 6000 miles away and  when they’re away from home.
Luckily, my Dad enjoys planning and talking about trips whenever he can. We obviously knew where they were going, but we also knew where they were going  to stay, where they wanted to eat and what they were going to see and explore on their trip.

First, I informed the hotel that they were staying at about my parents’ reason for the trip and asked them to welcome them with a bottle of champagne and a fruit basket upon their arrival. That was a fairly easy thing to arrange and we were pretty sure that it would help make them unsuspecting of anything else to come.

But the bigger surprise was organized for Saturday, which was my parents’ actual anniversary. My Dad had talked about a really good, well-known restaurant, Trespais, that had been shortlisted for their anniversary dinner. I emailed the restaurant and asked if they’d be able to help my sister and me to plan a surprise for our parents.  Basically our plan was to try and get them to go to the restaurant,  have a fantastic evening with wine and delicious food, and then have the restaurant staff deliver our best wishes for a wonderful anniversary  in lieu of the bill.

The restaurant owners were super-nice and cooperative and they were excited and willing to help with the surprise without any hesitation.

I reserved a table (under my parents’ last name) in advance to make sure they had room to accommodate them, but also told them that the plan was to get my Dad to make a reservation himself, so that we could avoid telling them what we were up to and really make this a total surprise. So, before my parents left for their trip, my sister persistently – but as unsuspiciously as possible – tried to get my Dad to reserve a table at the restaurant for their anniversary dinner. He finally did one day before they left.

On Saturday, my sister and I were texting back and forth because we were so nervous and excited to find out how the surprise played out. My sister said that she would stay up until my parents would get in touch with us. And sure enough, at 11 p.m. (German time), my Mom finally texted. They were completely overwhelmed and confused when the restaurant owner presented them the bill…. which was a card that simply read “Happy anniversary from Sandra and Nina”.

Apparently, the restaurant owners and staff had just as much fun with the surprise as we did, because my Mom told us that the owner said that she couldn’t help but have a huge smile on her face every time she passed my parents’ table and that it was hard to not blow the surprise until the very end.

And my parents were truly blown away. They were raving about the excellent food, the outstanding service and the overall ambience of the restaurant – and the fantastic, completely unexpected surprise, of course! –  and walked out without paying a dime.

I am so, so happy we were able to pull off this surprise for them. It’s usually really hard to organize something and keep it a secret from both our parents. In the past, for one reason or another, one of them always had to be let in on any surprises in advance. This time, we were able to completely keep it a secret and surprise both of them. They were absolutely clueless (although my Dad says that, in retrospect, my sister was really pushy about him making that reservation at the restaurant. Haha!).

Have you successfully surprised someone before? How did you pull it off?