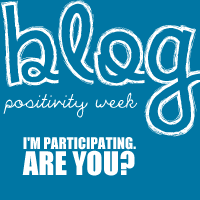 One week dedicated to reminding us all that the blogging
community is an awesome thing to be able to be a part of.

Ashley over at After Nine To Five had this fabulous idea to declare this week “Blog Positivity Week” to spread some positivity around the blogosphere and remind all of us that we’re part of a pretty amazing community. Today I want to talk about kindness and the conscious choice of eliminating negativity from your blog reading experience.

Obviously, when people blog, they share opinions. That the nature of blogging. Often we agree with what other people put out, have encouraging and supportive words for fellow bloggers and make incredible connections with people all around the world based on similar experiences, opinions and interests. Naturally, as in real life, we also come across bloggers and their blog posts that annoy us, that we disagree with and that we judge.

I guess, I have been very lucky to personally never have been the target of hateful comments or outright attacks online. This could be due to the fact that my blog has a relatively small readership compared to others and I am totally ok with that. (If that GFC widget would still be working for us WordPress bloggers, you would see a number of about 150 followers in the sidebar, but judging by the number of comments that are on average left on my blog, I would suspect the actual number of readers is even smaller). It might also be due to the fact that I haven’t posted content that was controversial enough to offend anybody or the fact that when I communicated my opinion, I did it in a mostly calm and respectful manner as to not lend myself to attack and harsh criticism. Either way, while not having been in the center of negativity myself, I have witnessed my fair share of meanness, disrespect and personal attack online and I am here to ask people to implement good manners and go by the rule

“if you don’t have anything nice to say,
don’t say anything at all”.

I always wonder about people who take the time and effort to bash other bloggers, write elaborate comments and/or emails only to spread negativity and lash out. After all, nobody makes you read someone else’s blog and if you find yourself repeatedly annoyed, I’d suggest you just stay away from this particular blog.

If you do feel the need to respond to a blog post that strikes a cord with you and if you have a legitimate point to make, do so with uttermost respect and tact. And for Peets’ sake, know your facts. There is nothing more frustrating than getting into a heated discussion with someone who argues on the basis of shaky knowledge.

The anonymity of the Internet makes a lot of people forget common courtesy and leads to them  writing things that they would never say to another person’s face. If we all remind ourselves that words can hurt just as much as physical attacks and that there is really nothing gained from attacking people in the meanest possible way, I think there is a pretty good chance that we can all get along. We should never forget that the best way to resolve a difference of opinion is simply to

If you want to learn more about Blog Positivity Week, head over here. You can write your own posts this week and link up! We’d all love you to spread some positivity around the blogosphere!