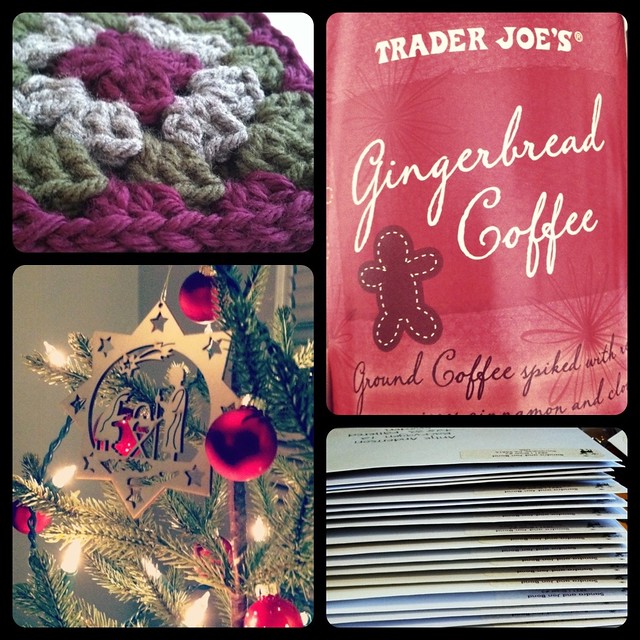 This last weekend, while busy, was a weekend after my own heart. It was the last weekend that J and I would be spending at our cozy apartment this year, since we will be leaving for SoCal next weekend, and it was just wonderful.  I had a lot of things that I needed to get done, but it was satisfying to cross things of my list; I had a full schedule, but it was still relaxing; it was stressful, but very christmassy.

I love having (most) Fridays off, because I was able to get the rest of my Christmas shopping done without hitting stores on the weekend when everybody and their brother is out Christmas shopping. I had a list of stores to go to and specific gifts to pick up. No last minute browsing. Well, unless you count the browsing for myself.

So here’s a question: how is it that when you’re supposed to shop for other people, you always end up finding something for yourself? I swear, I don’t do this on purpose, but when I am supposed to be not looking for myself, all the things I have been looking for like forever magically pop up in front of me (like the boots that I mentioned in my wishlist and a cable knit sweater dress, which was marked down to $17 at Target, thankyouverymuch). I am a big believer in seizing the opportunity, so I did. Nothing wrong with getting oneself a little something for Christmas, am I right?

The rest of the weekend was spent cozily at home. I had Christmas cards to write (and many of that!) and actually ended up making a few more since I was running out of handmade cards and damn it, I was not going to send 5 store-bought cards after all the work I had put into my handmade stack. All the cards (that were going to be mailed) were done by Sunday night and went in the mail yesterday.

The rest of the time, I was busy finishing up some of my handmade gifts, while consuming Christmas cookies and copious amounts of coffee and tea. Oh, and as you might have seen me mention on Twitter, I have a new TV series to watch, yo.

I started “How I met your mother” this weekend (thanks to Netflix’ online streaming) and I’m really starting to like it. Truth be told, the reason why I am so late to the party is that I wasn’t really into “Barney”, who – while not being the main character of the show – is always part of every commercial and I found him kind of annoying (though, hold your horses, he’s growing on me in his own weird way). I am much more a fan of Ted (who I think is kind of cute) and Lily and Marshall.

So don’t mind me over here, catching up on a series that originally premiered in, oh like, 2005. I know it’s kind of a repeating pattern for me to get into series way after everybody else does (what with my latest obsession with “Friends”), but at least it allows me to watch episodes at my own pace and whenever I feel like it. So, there.

How was your weekend, peeps?