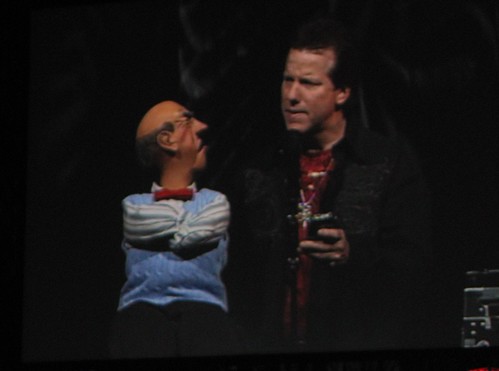 Last Thursday, J and I had tickets for Jeff Dunham’s show “Identity crisis”. I think I never actually told you about the two great Christmas present ideas I had for J last year – 1) was a Roku player (Internet streaming box for the TV – yeah, yeah, we still don’t own a PS3 or Wii, shut up!) and 2) were the tickets to see Jeff Dunham.

We already had the chance to see him once in 2009 and the show again was absolutely amazing. I was really lucky to be able to purchase tickets early through a pre-sale (due to my account with Ticketmaster) and got floor tickets again, 14 rows from the stage.

Unfortunately photo and videotaping were completely prohibited this time (although I saw a lot of people snapping photos with their cell phones) and I didn’t want to make anybody mad, so I can only share an old photo from 2009 with you – but hey, the guy and the puppet looked pretty much the same.

I don’t know if you’re a fan of ventriloquism. I understand it’s not everybody’s cup of tea, but I just love the way Jeff Dunham interacts with his puppets and how they really come alive through him. I also kind of love how politically incorrect all his puppets are – comedy is the only true form of free speech, I believe!
(I’d like to add that I am usually not easily offended by controversial issues when they’re brought up in a comedic context and I don’t really understand people who are). I haven’t laughed that hard in a very long time.
It’s this belly-aching, cheek-hurting, breath-taking laughter that leaves you completely exhausted, but thoroughly amused! Seriously, my belly muscles were so, so sore the next day!

Has any of you guys seen him (or any other great comedians) live lately?