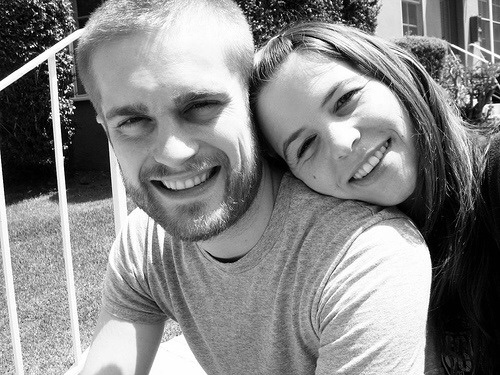 With these three German words, J’s and my relationship began exactly 9 years ago today. He was this handsome Freshman in College and I was the exchange student from Germany. Two other exchange students and I had gone to the Freshman party on Campus and I didn’t really expect anything more from this night  than meeting some nice people, hanging out, and having some fun.

J was open, friendly, like most Americans. I was freakin’ excited when he introduced himself in German and burst out “OMG, you can speak German”, to which he replied “I’ve overheard you speaking German, but no, this is all I can say so far. I’ll be starting my German classes next week”. I laughed. We’d definitely broken the ice.
I didn’t think much of it when he started small talk, followed us into the gym and sat down with us. It felt so normal to talk to him, almost as if we had known each other for a long time already. Like old friends.

Having just gotten to the US three weeks prior, I was thrilled to meet more people on Campus and to possibly have found someone who would take me to parties and events, so I didn’t have to hang out with the other (German) exchange students all the time. Admittedly, on one hand, it’s pretty comforting to have other exchange students around (because we’re practically all in the same boat – newbies on an American University Campus), but on the other hand I really didn’t want to hang out only with other exchange students for the duration of my stay. I wanted to meet Americans, experience life from a different perspective and most of all, improve my (spoken) English.

Even though I was majoring in English, Geography and P.E. – my conversational English was rusty. I just hadn’t had much opportunity to converse in English before.
I think J could tell. It took him a while to figure out that I was able to follow his every word, but that I just couldn’t put together responses quickly enough. How embarrassing if you’re sitting next to a supercute guy and you’re frantically searching for words.

J walked me home that night and stopped by the next day with a friend, just to say “Hi”. I thought it was so nice of him, he was afraid of imposing. (Guess that’s a topic for another blog post.) We hung out for a little while and when they left, J gave me a kiss on the cheek and whispered in my ear “I feel a connection. There is something between us.” I thought he was being cute, felt flattered and definitely had some butterflies in my stomach, but never in a million years would have expected things to play out the way they did.

In the following weeks, we spent more and more time together. I canceled my flight home in December and stayed another 2,5 months to get to know him better, and then returned to Germany with a big lump in my throat. The part I didn’t tell you is: I had a boyfriend back home. A boyfriend of many years. I think I had already known that things weren’t going so well when I left for my exchange semester. I felt like I needed a time out, some space to straighten out my feelings, and the exchange semester came right at the perfect time for me to get some time to clear my head. Only that I hadn’t expected to meet somebody else while being away. In fact, the LAST thing on my mind was getting involved with someone else (HELLO EMOTIONAL TURMOIL), least of all falling for a Freshman in College, 6000 miles away from home. But things like that sometimes just happen.

J came to visit me in Germany the following summer. Lots of people thought I was absolutely crazy for leaving my boyfriend to be with a 19-year-old kid from the US. I probably was! But truth be told, I couldn’t care less at this point. I had been pleasing everybody around me for the better part of my life and this time I was just going to trust my guts. Was I sure that things would work out with us? NO. But for the first time in a long time I felt this to be the right decision, one that I had completely made on my own without consulting anyone about it.

J and I have been married for over 4 years now and even though we have faced many challenges in our relationship that I probably could have saved myself from if I had chosen the “easy” path and stayed with my ex-boyfriend, I don’t regret having made the decision that I made.

So yeah, meeting him was totally random and so unplanned and we had absolutely NO idea at this point that this would become a wonderful love story. YES, a love story that had to overcome very many obstacles including months of separation, fighting for the legal right to be together and proving to the world (and the US Immigration Services) that our relationship was real and that relationships across the Atlantic can indeed work out.

Love was the last thing I had expected to find on my study abroad adventure, but I guess, love found me.