The day of travel was a little chaotic, to say the least.
My Dad took me to Düsseldorf airport around 6:30 a.m. last Wednesday and when we arrived, there were LONG (and I mean, really long!) lines at the Lufthansa Check-Ins.
I was able to check in my luggage and then said a quick goodbye to my Dad. (Thank God my sister didn’t come to the airport, that would have been a disaster because she ALWAYS starts crying and then I start crying, too, and then my Mom can’t hold back the tears either. It’s a rather wet matter). I made it through security only to hang around the gate for over an hour.

Lufthansa had a worldwide computer system failure and everything had to be done manually (can you imagine?). Needless to say, my plane was late and I landed in Frankfurt right around the time the flight to Houston was supposed to take off. Luckily, because of the system failure, the flight was delayed as well and I made it to the different terminal in time to board. Mind you, I was soaked in sweat when I arrived at the gate, but who cares to sit next to me for the next 10 hours, right?
Then, the next bummer: because of the system failure, every passenger had to identify their luggage before it could be loaded on the plane, but my luggage (a suitcase and a sports bag) wasn’t there. I was the only one on the platform eventually waiting for my luggage and by the time I boarded the plane, my luggage still hadn’t turned up.
I learned that it was possible held up when it was being transferred from the DUS-FRA flight to the FRA-IAD flight and that I should complain to Lufthansa if my luggage isn’t there once I get to Houston (IAD). 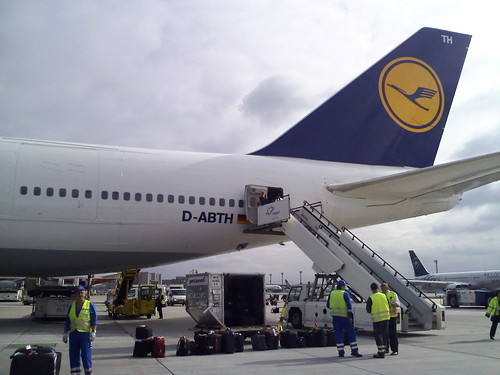 The flight was long and at least I got lucky and could switch seats, so that I had an extra free seat next to me. I tried to sleep as much as I could. The meals were also pretty decent – considering that airplane food is never something to write home about. I had Nürnberger Rostbratwürstchen with Sauerkraut und mashed potatoes for dinner and Beef Geschnetzeltes with rice and zucchini shortly before we landed, and both dishes weren’t bad at all.
When I got to Houston (with a 2 hour delay) my luggage was indeed not on the plane. Bummer! I also had missed my connecting flights to Sacramento, so I went over to the Lufthansa counter and was told that they had rebooked me already. On the same flight FOR THE NEXT DAY!
Waaaah! I didn’t have my luggage and they were going to put me in a hotel for about 24 hours? No way! I told them that I really wanted to go home and that they’d better find a seat on another plane for me.
Eventually, they were able to rebook me on a Continental flight (thank God!) for 8 p.m., but they couldn’t give me any information about the whereabouts of my luggage.

I got into Sacramento around 11 p.m. and an impatient hubby was awaiting me already. Thankfully, I was “only” 2,5 hours delayed from my originally anticipated arrival.
We went to the Lost & Found Center to let them know that my luggage got left behind and to arrange delivery for once the bags got there and then all I wanted was to go home and fall into my own bed.

I need to mention that Houston gets “two thumbs up” for a very good airport experience.
I’ve gone through many, many airports on my back-and-forth travel to Germany and I have rarely had such a good impression of an airport. The personnel was very friendly (although I am still not sure why the immigration officer a) didn’t crack a joke about my last name (they always do!) and b) asked me so many unnecessary questions) and what impressed me the most was that drinks and food were not – against all expectations – outrageously overpriced.
I paid $1.61 for a 20oz bottle of soda and $3.25 for a big serving of Chow Mein at Panda Express. 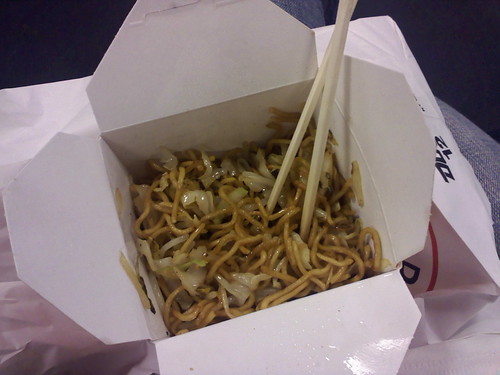 I mean, seriously, name one airport where you can have dinner for under $5!
All that was missing was the free Wi-fi! :)

I had originally planned to go to work again on Thursday, but for obvious reasons (getting home very late, no luggage, being exhausted), I decided to stay home and recuperate.
Luckily, I received a phone call in the a.m.’s letting me know that my luggage was on route and that it was going to be delivered in the evening.
I received my bags shortly before I was about to go to bed and, thank God!, it looked like customs/immigration didn’t even inspect my “single traveling” bags and the goodies that I brought back from Germany were all there :)

Wow, and now I’ve been back home for a whole week again already.
Goodness gracious!