The last weekend was awesome. Girl-time with my best friend for the first time in months!

I hopped on the train Friday afternoon to go and meet her in San Francisco. The train ride is a pretty straight shot from here and should have only taken me about 2,5 hours [including riding the BART for the last stretch of the trip] to get into the heart of the city – if it hadn’t been for the bus bridge between two train stations, because the tracks in between were under construction.

Considering that there is no passing track that could have been used, Amtrak planed it out pretty well. There were buses waiting at the train station where we had to get off and at the other train station another train was already waiting that would take us onto the rest of th trip. At least there was no waiting time involved.

I stepped off the BART at around 5 p.m. and had two more hours to kill before I would meet my friend at her hotel right off Market Street. I walked around, did a little windowshopping and then received her text message: “I am here! Where are you?”

Well, I was just around the corner and not even 5 minutes later I was standing in front of her hotel room door. She opened the door, we hugged each other and even though I was thrilled beyond belief to see her after almost 6 (!) months, it felt like I had just seen her for coffee the other day. It’s amazing to feel so close with someone that there is no weirdness whatsoever, even when you haven’t seen each other for months!

After about an hour of initial catching up at the hotel, we took the cable car up Powell Street to North Beach and went to have dinner at an Italian restaurant. We sat for two hours and just talked and talked and talked.

The next morning we had a yummy breakfast at the hotel [50% LH discount – can’t beat that!] and then got ready for a full day together in SF. We decided to walk rather than take the cable car/BART and walked along Grant Street through Chinatown, to Washington Square in North Beach to Lombard Street and then down to Fisherman’s Wharf to catch a glimpse of the Golden Gate Bridge and walk on to Pier 39 to visit the sea lions :) 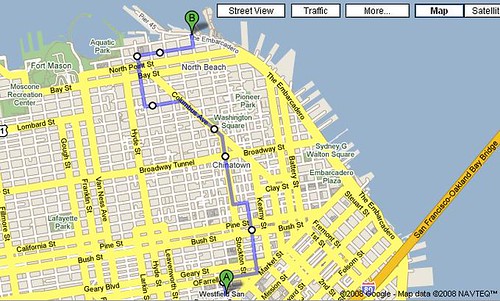 Besides the fact that I had made a really bad shoe choice for the day [6 blisters – 3 on each foot and the necessity to buy some flipflops along the way, because there was no way I could have made it any further with my shoes – and I totally thought they were comfortable, but apparently not for a day of uphill and downhill walking in SF], we had a FANTASTIC day.

Even though the weather forecast had predicted overcast skies for the weekend, it was a gorgeous, sunny day. 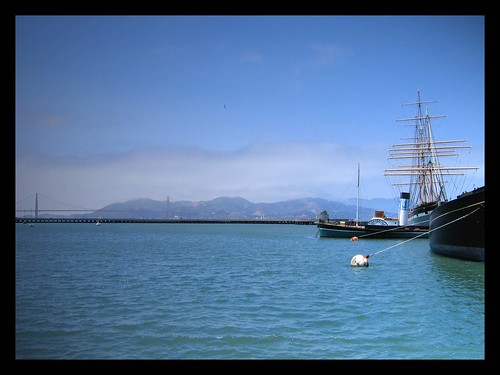 We sat at the pier with a smoothie and enjoyed our precious time together [and both got a little sunburned].

In the late afternoon we walked all the way back to the hotel, taking a little break at Union Square where we sat and watched the people.

Since we were both a little tired [Ira obviously more than I due to the jetlag on top of the walking], we decided to have dinner at a restaurant across the street from the hotel. It was another Italian restaurant [we both didn’t mind!] and they had an interesting variation of bruschetta with goat cheese and really good pasta!

Then we went back to the hotel and had a little “pyjama party”… with more talking until Ira fell asleep around 9 p.m. and tv-watching [The Notebook – just LOVE the movie!]

In the morning we enjoyed the breakfast buffet one more time and at 11 a.m. it was already time to say goodbye again :( Damn. Why do good times go by so fast all the time?

Ira and the rest of the LH crew were going to be picked up at noon and I decided to walk some more and practice a little more with my new camera :)
See more photos here.