Well, since everyone is talking about anniversaries… I am a little late, but I had an anniversary to celebrate as well :)
I went to see Joe McIntyre last year on May,27th… I mentioned that this was my special day this year as well, as I also received my notebook that day!
Anyways, I don’t think I posted any pictures, so it’s my turn now… 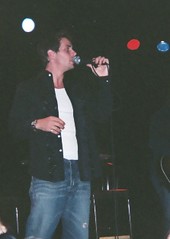 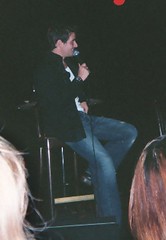 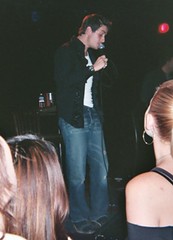 Isn’t he just gorgeous? It was a fantastic concert and I was soooo close to the stage! I love these small concerts in small clubs! :) I actually do like that he’s not as big as in NKOTB times anymore – makes it less stressful to go and see him perform! ;)

hey there! Sorry for the late update. We had a fantastic time in Ventura. :) Friday we drove down to LA to meet with our ex-roommate (he’s engaged in a PhD Program at UCLA now). It was good to see him. He had changed a bit. Grown up.
We went out for dinner to a Thai food Restaurant *yummy* and then walked around Westwood. It’s a nice part of LA. It actually didn’t feel like being in a big city at all. Then just drove “down the street” to Santa Monica and went for a walk along the beach and to the Santa Monica Pier. There was a lot going on Friday nights, all the lights were turned on, the little fair (that I’ve only seen closed so far) was open and we took a ride on the ferris wheel. It was fun :) Unfortunately we couldn’t see very far, because it was too dark, but instead the whole atmosphere was pretty nice with ocean roaring in the background.

Saturday morning we went out for Brunch with Jon’s parents and I had *yummy in my tummy* Belgian Waffle with fresh strawberries and cream :) I just couldn’t resist.
Afterwards Jon’s Mom treated me to a shopping trip and we bought cute brown pants and a matching beige knit top for me and some shirts for Jon. It was fun! Jon’s Mom is so cute, she said she likes shopping with me, because she never had a daughter to do that with *lol*

In the evening we had BBQ ribs and later on watched a movie together. It was from the 60’s, was called “Morgan” and it really was strange, but entertaining :)

Sunday morning we accompanied Jon’s parents to church and afterwards took off to drive back to Sacramento. I didn’t really look forward to being in the car again. Luckily we made it home in 5,5 hours, when I was reunited with my notebook :)Ã‚Â  I had missed it so much!

We made a big salad for dinner and then I caught up on my mail and other stuff. I had 4 swap packages in the mailbox when we came home, which was definitely an awesome surprise :)

Yesterday was pretty busy at work. I had to fill out more paperwork for the University Foundation for my J-1 status (don’t ask me why) and then I got a call from my new sponsor office and they wanted to know if my degree is equivalent to a Master’s degree.
So I spent half the afternoon with research on that matter, so I would have some links to provide and I also was asked to write up an explanation of the German education system and the specifications of my degree.
Since our server was down in the afternoon, I couldn’t finish that email and went home and spent half the evening on it, before I sent it off.
At least it was worth the effort, as I had an email from both my boss and the sponsor office in my mailbox this morning with comments like “good job”, “great documentation” and so on :) So I am sure this is sufficient information that my “Staatsexamen” is equivalent to a Masters Degree.

Well, but one thing seems to work out and another hurdle comes up. I feel like on a roller coaster.
Even though my visa states that I am not subject to the two-year home requirement (which applies to some J-1 visas and means that you have to return to your home country for two years, before you can apply for a new visa), the lady from the USGS International Program Office told me that I am.
I talked to her on the phone today and explained to her that my visa doesn’t say so, but she said that I was receiving money for my internship and therefore was sponsored by the government (one reason for when the two-year home requirement rule applies).
This is, in fact, not exactly true as I was told I can’t be sponsored by the U.S. Geological Survey (because they are a government agency!) and I was hired through a student appointment by the University on which Campus our office is located.

It’s all so confusing and I think that even the lady from the International Program Office who should know how things work, doesn’t know a damn thing. Is this any news to me? NO! But I am getting pissed off. :(
She said she’ll call me back tomorrow, so I’ll keep you posted.

@ Cath: I got your letter, hun! Thank you soooo much! It made my day!

@ Sanni: Can’t wait to get yours and listen to the great music :)

yes, we finally made it down here. I worked yesterday until 4 p.m. and then Jon, Aaron and Maria picked me up and we made our way down here. 6 hours…
I didn’t really feel like being in the car for so long, but I slept for the first 2 hours (I must have been real tired ;)) and then we stopped to get gas and get something to eat. I had hardly eaten anything all day, so I was really hungry, but all you can get along the highway is pretty much fast food… and plenty of that! We decided to go to Burger King (which seemed to be the only bearable fast food chain where we stopped) and I got some chicken tenders and fries. What a healthy meal :) I had an orange afterwards which made me feel better *lol*

We made it to Ventura by 11.30 p.m., because we had to drop of Aaron and Maria at his Mom’s house in Ojai and we also stopped at the beach (always our first stop! :)) to listen to the ocean for a little bit.
Jon’s Mom was still up and very happy to see us, so we talked for a little bit and went to bed around 12:30 a.m.
Now the sun is shining and I am looking forward to a good time down here…we probably going to drive down to Malibu/Santa Monica on Highway 1 later and go to the beach :)
I hope you guys have a wonderful weekend, too!
Love you all!

no, I am not complaining, just apologizing for not updating you earlier on what’s been going on.
Saturday was quite relaxed. I enjoyed the notebook, transferred some files and explored more possibilities with it. I love it :)

I only had it for a day and didn’t want to miss it anymore.

We watched “Finding Neverland” on it later and it was a pretty nice screen quality and we had attached Jon’s speakers to it, which gave us a nice surround sound :) I also loved the movie, I have to say. Have you seen it? I highly recommend it. I thought it was astounding that it was Johnny Depp’s latest movie and he looked so amazingly young in it. I loved the plot. Very inspirational.

Later that night Jon went to the airport to pick up Aaron and Maria, who happened to arrive a day earlier than we thought. We stayed up until 2:00 a.m. and talked for a while.

Sunday morning I chatted with Sebi (Sanni was out on the balcony cleaning out the rabbit cages) and Ilka for a while and then we had a nice breakfast. In the afternoon we went for a drive to show Aaron and Maria around in Sacramento. We ended up in Downtown where the “Jazz Jubilee” was taking place – a huge Jazz Festival spread out through the city. We parked the car and took a walk around and also went over to Oldtown Sacramento.
On Saturdays, there are tons of people in Oldtown and because of the Jazz Festival there were bands playing on every corner. It was fun :)

On our way back, we stopped at the store, got some groceries and later on had a nice BBQ. I love BBQ in the summer. It smells really good and the grilled meat and vegetables are delicious. I wanted to go for a swim, too, but there were too many kids in the pool on Sunday.

Monday we just relaxed at home. We slept in real long, I chatted with Sanni and Ilka for a while and then hung out in the main room with everybody else, while we were all doing our “own thing”. I wrote a letter and some emails, Jon was listening to music and Aaron and Maria read.

I do have to say, I am soooo attached to my new “baby” that I can hardly give it away to anyone else *lol* It’s so convenient to sit wherever and do your correspondence and wireless Internet is the best invention ever :)

Yesterday I was quite busy at work, we had a meeting at 10 a.m. that lasted until the afternoon and then I had to try and catch up on some of my work. I stayed until 6 p.m. and when I came home I had to work on my resumÃƒÂ© that Gerald needed by this morning.
Not having much experience in writing resumes, especially not with the American layout, it took me the whole night to write it and Jon went over it with me when I was finished to see if I made any major mistakes, but he was quite satisfied with my writing :)
We worked on the layout a little more and finally sent it off at 1:00 am, so Gerald would have it early the next morning.
Needless to say that I was tired this morning *yawn* but at least Gerald could tell me that he sent off my information to this potential sponsor this morning. Keep your fingers crossed, girls!