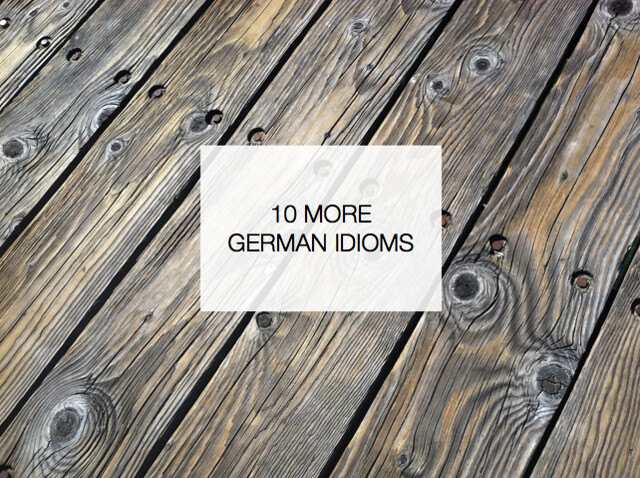 If you’ve been reading my blog for a while, you know that in the last two years during NaBloPoMo, I started a little series about German idioms. Idioms are awesome in every language and the more idioms you know in a foreign language, the closer you’ll get to perfecting your language skills.

J and I still have fun finding (and using and teaching each other!) new idioms both in English and German and since some of you have enjoyed these posts in the past, I thought I’d keep with the tradition and share with you even more German idioms. All of these are (as far as I know) still pretty standard to use. I use all of these (some more than others, just to make sure you’re not thinking that I am giving you outdated resources here!). I hope you enjoy them!

Find the first round of idioms here and the second round here.

“Ich könnte mir in den Arsch beißen.”  I could bite myself in the ass.  It means that you could kick yourself.

“Ich habe die Nase voll.” I have the nose full. This has nothing to do with having a stuffy nose, it simply means that you’re tired or sick of something.

“Hopfen und Malz ist verloren.” Hop and malt is lost. This expression is used to say that something is a lost cause. The idiom stems – surprise surprise! – from beer brewing. What would we Germans do without idioms that have a reference to beer? Exactly. When something in the brewing process went wrong, the ingredients were considered wasted and therefore the chance of getting a good beer was a lost cause.

“Da liegt der Hund begraben .” That’s where the dog is buried. I am not sure where this idiom came from, but the English equivalent is That’s the crux of the matter.

“Hier spielt die Musik.”  Here is where the music is playing. I love this idiom and have heard it a lot. Teachers have often used it in school to get their students’ attention when they were distracted by something else. It means that here is where the action is or where you should pay attention.

“Einen (dicken) Hals haben / bekommen.” To have/get a (thick) neck.  This is an expression of anger or general annoyance. Have you ever been so angry that you could feel your neck muscles tensing? That’s what this is describing. If you say, “ich habe einen (dicken) Hals”, you’re saying that someone or something really annoys you.

“Aus der Reihe tanzen”. To dance outside of the line. This can be used in a negative and positive way and it describes someone who stands out either by getting out of line or acting different from everyone else.

“Seinen Senf dazugeben.” To add your mustard. It means to put in your two cents. Don’t know why we have an obsession with food-related idioms, but there are many!

“Kopfkino”. Head cinema. This is what happens when the imagination runs wild and you involuntarily use your imagination to think of troubling or disgusting things in graphic detail.

“Bist du lebensmüde?” Are you life-tired?  You use that if someone is doing something that is stupid and could possibly get them killed. It’s like asking “are you trying to kill yourself?”

Teach me an idiom! Or ask me for the translation of an English idiom in German!